What If I’m Wrong About the Markets? 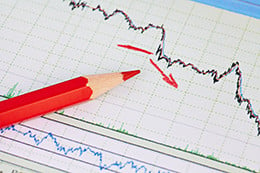 If you’ve been following my posts lately, you know that I’m not panicking about the current market decline. In fact, despite yesterday’s drop, I believe the market situation is normal, reasonable, and not likely to turn into a 2008.

On the other hand, it’s always worth considering how and why you could be wrong. So let’s make the opposite case and argue for a crash. What evidence do we have that the world is coming to an end?

Recession, though unlikely, could bring on bear market

Yesterday, I wrote about the common underlying factors of a bear market: a recession, a commodity price spike, an aggressive rate increase by the Fed, and high valuations. Right now:

The only real problem would be if the U.S. suddenly slid into a recession. How likely is that?

In my monthly risk factor update, I track what I consider the best indicators of pending economic slowdowns. As of last week, none of the signals was flashing red. Job growth continues to be strong, consumer comfort and spending are growing, and Americans are actually in a better financial position than they have been in years. Recent signs of a slowdown appear to be passing, and although we’ll certainly have a recession at some point, the data says it’s at least 12 months away.

With continued economic growth, top-line growth for American companies is also likely to continue. What could hurt it? Largely the same things that hurt it in 2015. Low oil prices hammer the energy sector; a strong dollar hurts overseas sales; weak foreign economies hit U.S. exports. The thing is, these trends are already in place. To do further damage, they would have to get significantly worse, and, with the exception of oil prices, they’re not. In fact, as companies adjust and as markets normalize, they may get marginally better.

Loss of confidence another slight possibility

The economic case for a bear market is hard to make. That doesn’t rule one out, however. The other possible cause is a systemic loss of confidence.

Looking back at history, we see that most bear markets have resulted from economic factors, but there are counterexamples. In 1962 and 1987, for example, the only visible economic factor was high valuations. But 1962 also had the Cuban Missile Crisis, and 1987 had the program trading problem on Wall Street. In both cases, the cause of the bear market seemed to be a collapse in confidence rather than economic issues.

Although the situation today is substantially different—no Cuban Missile Crisis, for example—the potential for a major loss of confidence is possible. Assuming that did happen, how long would the bear market last?

The 1987 bear market lasted three months, and the 1962 bear market lasted seven months. The other eight bear markets since 1929 lasted between 17 months (the financial crisis) and 63 months (1937), with an average duration of just over 30 months. In other words, without aggravating factors, bear markets have been short and sharp. If the current situation were like 1987 or 1962, we could reasonably expect the damage to be fairly short lived.

This may not be much comfort, but, without the underlying economic factors, bear markets do seem to heal quickly. I don’t think we will see one, but if we do, it shouldn’t be a 2008 scenario.

What would it take to rupture confidence?

Well, as you know, all of those things have happened in the past couple of weeks. And although there has been an effect, it’s been surprisingly small so far. If all of that can’t break confidence more than it has, then the bar for something that could cause a bear market has been set pretty high.

So, try as I might, I find it hard to make a case for a bear market. Absent a loss of confidence, the ingredients just don’t seem to be there. And even if confidence were to crash, history suggests the damage would be relatively short-lived.

This isn’t to say we won't see further declines, of course. But again, I find it hard to turn 2016 into 2008. Unless something really bad and unexpected happens, this still looks like normal volatility.