Once again, it’s time for our monthly update on risk factors that have proven to be good indicators of economic trouble ahead. Last month, we got our first yellow light (in consumer confidence), which continues this month despite substantial improvement in that area. Although there were some indications of weakness in other parts of the economy in December, we also saw positive signs, notably in employment. Overall, the picture this month is somewhat better than last month.

Again, one yellow light doesn’t mean trouble in the near future, as most of the trends remain positive. Many of the signs of a slowdown seem to be passing, and as we move into the new year, the economic forecast continues to be solid. 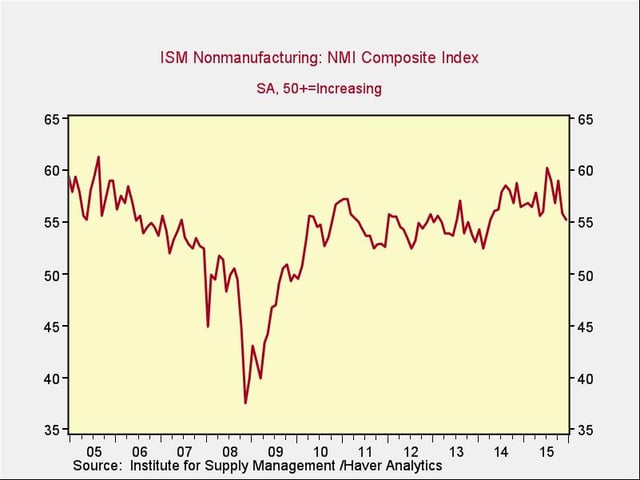 This metric dropped in December, for the second month in a row. Although no longer at recent record levels, the service sector continues to expect both business and employment expansion, and this data point remains healthy, near where it was before the financial crisis. Continued strength in the service sector is consistent with business confidence; as a representative sample of the largest sector of business, this is an important leading indicator. 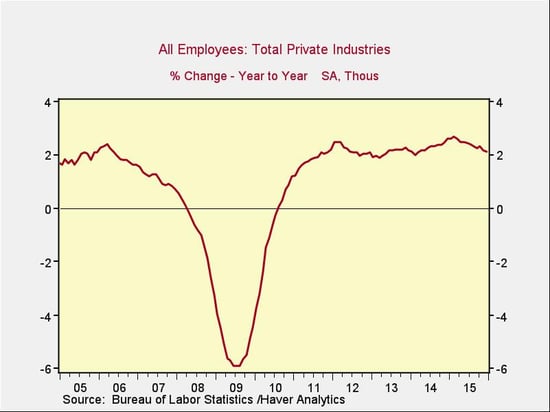 Private employment growth year-on-year continued its decrease, largely because of weak third-quarter results. Nonetheless, it remains at healthy levels, at or above those of the mid-2000s, with recent strong monthly figures suggesting the decline may be stabilizing. Because this is an annual figure, the changes are slower and smaller than those we see in more frequently reported data, but the trend continues to look stable. 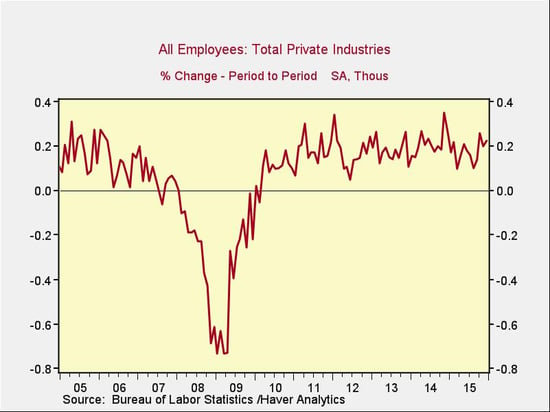 These are the same numbers as in the previous chart, but on a month-to-month basis, which can provide a better short-term signal. Fourth-quarter figures were much stronger than those of the weak third quarter, ending with better-than-expected December data, as well as an upward revision to November. Employment remains at a growth level consistent with the mid-2000s, and total employment growth continues to be healthy. 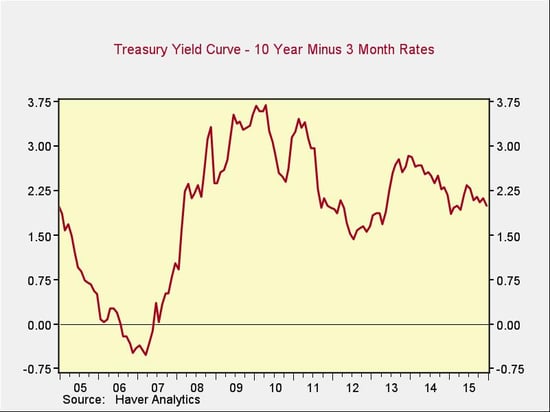 Rates for the 10-year Treasury ticked up slightly over the past month, while 3-month rates declined, and the spread between long-term and short-term rates remains healthy. Despite the Federal Reserve’s decision to start raising rates in December, this metric has not changed, which seems due, at least in part, to demand from international buyers for assets with low political and economic risk. 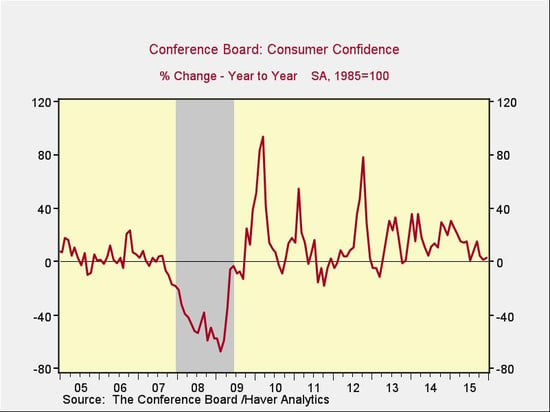 Consumer confidence increased this month, reversing previous declines. Although the year-on-year growth rate has declined, we’re not yet close to a worry point. Despite the recent uptick in confidence, however, I’ll continue to call this a yellow light until we see a couple more months of healthy data.

Conclusion: Slowdown possible, but not likely

With the exception of consumer confidence, which actually improved substantially last month, all of the major indicators continue to be positive. Although signs of potential weakness— such as the decline in the ISM Non-Manufacturing Survey and previous declines in the consumer confidence indicator— suggest that a slowdown is possible, it’s not a probability at this point, given strong employment growth and other positive factors.

On balance, then, it’s still a green light for the economy as a whole. 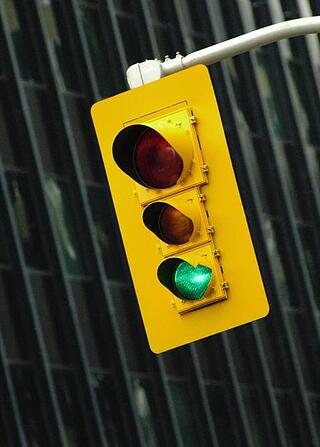