Where Are Oil Prices Headed?

I’ve written quite a bit recently about oil production and its benefits for the U.S. economy. A related topic I’ve been asked about, but haven’t addressed here, is where oil prices might be going.

Let’s take a look at the chart below, showing oil prices as quoted in Europe. 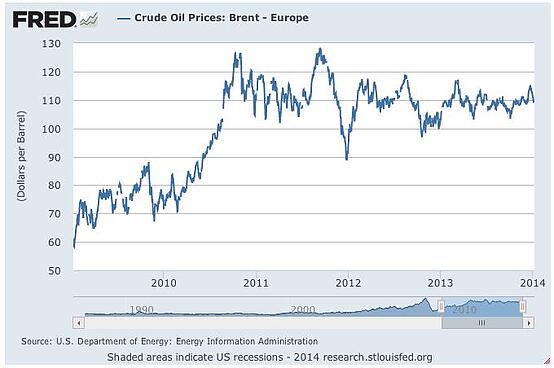 We see the decline from the financial crisis, then a rise as demand grows with the economic recovery through 2011 and 2012, and then another decline—even as the recovery gains steam, China’s growth continues, and Europe moves out of recession. Despite the spike from recent turmoil in Iraq, the price is still well below the heights of 2012, and the peaks actually seem to be getting smaller.

As usual, it’s all about supply and demand

What’s more, the chart seems to understate many of the effects. For instance:

Many other structural factors should also serve to weaken the supply/demand equation.

How the U.S. will help keep prices down

In previous downward oil price cycles, suppliers have acted to reduce production and maintain price levels, with Saudi Arabia usually taking the lead. As the U.S. moves toward becoming the largest world producer, the ability of other countries to keep prices high is eroding.

Given that we have multiple private companies rather than one state-owned oil company, the U.S. is unlikely to follow the same playbook. The economy as a whole also benefits far more from lower prices than it would from high prices.

Overall, factors that kept prices high in the past are likely to be less effective in this cycle, and the stable to declining trend over the past three years is likely to continue. We will still see occasional event-driven spikes, of course, but the general trajectory should be down.

For investors, buying into the trends that benefit from the expansion of the U.S. energy boom and lower energy prices might make sense. For example:

Even if prices remain steady, the relatively lower uncertainty around them is a benefit in and of itself—and one more piece in the ongoing U.S. recovery.