The Outside View: Brazil

Since it's a fairly quiet news day, I want to return to our "outside view" series on countries that matter around the world. So far, we’ve considered China, Europe, and Japan, but today we’ll shift gears and look at a very different country, Brazil.

One of the conclusions of the preceding analyses was that China, Europe, and Japan will be competing primarily against each other going forward. All have reasonably similar export mixes, are targeting the same kinds of customers, and have similar advantages and weaknesses. With so much competition, growth will be difficult, largely a zero-sum game.

For China, in particular, this is a change; for Japan and Europe, it means hopes for growth are more problematic than people want to admit. You could argue that the recent central bank policy actions, which weakened both the euro and the yen significantly, are an implicit recognition of this fact.

How Brazil is different

Economic openness. First of all, you can see that, with the exception of the U.S., Brazil is the least open of any of the major economies, with exports as a percentage of GDP at only 10.8 percent. This substantially limits the risk imposed by a slowdown elsewhere in the world, or from a political reduction in trade. 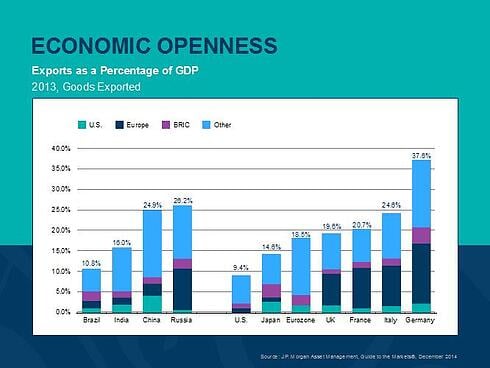 Brazil is, quite simply, less vulnerable to troubles elsewhere in the world.

Export mix. Brazil is also different in its economic structure. Looking at the exports and imports chart below, you can see that, unlike the areas we've looked at so far, its economy is based on raw materials rather than manufactured goods. Although Brazil can and does compete in some areas—aircraft, for example—the bulk of its exports do not compete with the other major economies. 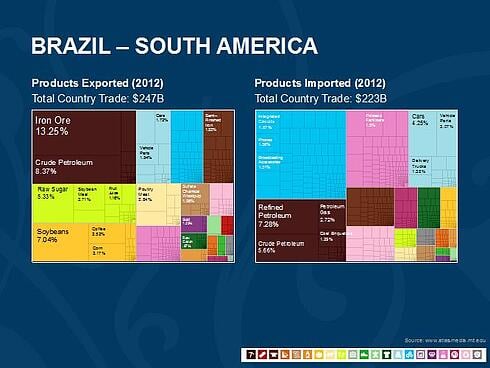 This is a significant advantage. With its reduced vulnerability and its different competitive niche, Brazil may simply be less exposed to global economic troubles. At the same time, though, when the global economy picks up again, so will demand for its products.

Financial standing. Brazil’s financial situation also reduces economic risk. Unlike any country we’ve looked at so far, Brazil has been running a surplus, and its debt level is well within reasonable levels. 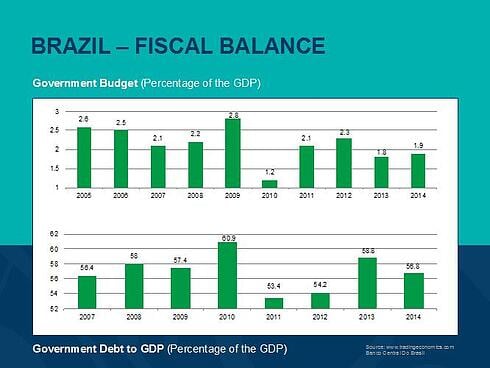 Conclusion: an investment worth looking into

There is no doubt that Brazil has suffered from a decline in demand, and prices, for many of the commodities it produces. There’s also no doubt that demand may take a while to recover. But the outside view tells us that not only is Brazil well positioned to take advantage of that recovery, when it happens, but it’s also very well positioned to ride out any intermediate troubles until then.

From an investment perspective, Brazil remains exposed to the commodities markets. Further slowdowns may present a risk. At the same time, though, that risk should be limited by the domestic focus and strong fiscal performance of the country.

The combination of limited downside risk and potentially strong upside performance—along with the fact that its market structure differs from the other major economies we’ve studied—suggests that Brazil may offer a potentially interesting opportunity for investors. As a representative of the emerging markets asset class, it also suggests that writing off those markets may prove to be short-sighted.