Building on yesterday’s post, today we’ll start to look at what a global perspective means in an investment context. Of course, I know perfectly well that all countries matter; what I’m getting at in the headline is “Which countries are economically significant on a global scale?”

GDP. There are several ways to evaluate which countries matter. The first, reasonably enough, is the size of the economy, expressed as gross domestic product, on the theory that bigger equals more important. You can see this expressed on the following map, from Worldmapper.org.

Clearly, the biggest economies are the U.S., China, Japan, India, and Europe as a whole (although not the individual countries). This makes intuitive sense, but the map also raises some puzzling questions. Brazil, for example, looks quite small, as does Africa. Russia is almost nonexistent.

Population. Another way to look at the world is by population, per this map from Gizmodo.com. 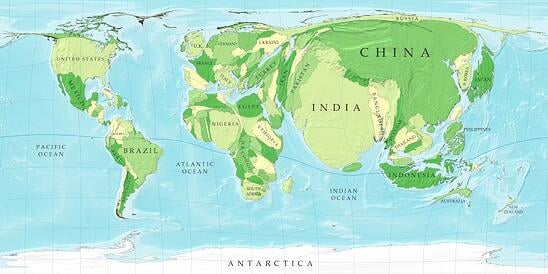 Here, China and India are the giants, and the U.S., Japan, and Europe as a whole are also significant. Brazil is more visible, and countries like Nigeria, Indonesia, and the Philippines show up as more important. But again, Russia is not very prominent. 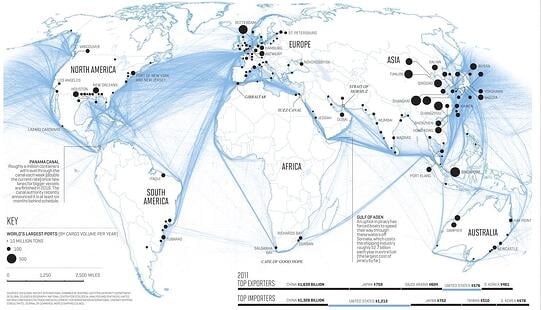 Looking at this map of the largest ports, we see the U.S., Europe, and Asia represented, and, on a smaller scale, Brazil and India. Russia and Africa are missing again, although Australia shows up for the first time.

Population and economic scale, coupled with trade networks and connections with the rest of the world, can tell you a lot about a country’s global relevance. Combining these factors, the countries that matter in a global investing context can reasonably be listed as follows:

This list isn’t shocking, certainly, but hopefully the discussion above helps illuminate why these countries are included.

Areas of opportunity. The analysis also highlights countries that are moving toward global relevance—Nigeria, Indonesia, and the Philippines, for example—but aren’t yet large enough economically or tied into the global trade network. We can see what it would take for them to make that leap, and potentially invest accordingly. These are the opportunity countries of the future.

What about Russia? For me, the real surprise in this analysis is Russia. You might assume that, as one of the BRICS, Russia matters because of its economy, but that’s disproved by the first map. Russia is important, and we'll discuss why, but not for the reasons the other countries are.

Tomorrow we’ll talk about what makes an economy important, and what that means to each of the countries that matter.