Europe: The Outside View

Today, we’ll continue the “outside view” series on international investing with a look at the eurozone.

Europe is interesting for a couple of reasons:

If we look at Europe as a whole and then at individual countries, very different pictures emerge. 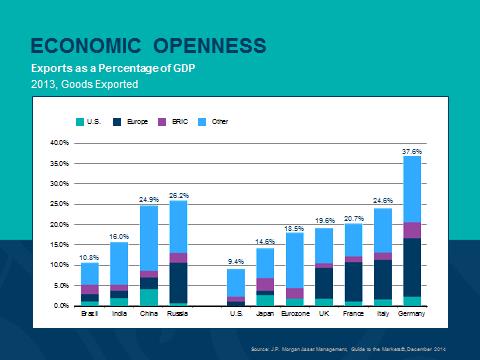 In the chart above, for example, the eurozone as a whole has exports in the same middle range as Japan or India, and you could argue it is less exposed. Looking at the three largest economies, however—Germany, France, and Italy, which together make up about two-thirds of the eurozone—we see that the exposure to exports is very high.

Differences also exist among the large economies. Germany, for example, exports much more than either France or Italy does. Comparing the export and import mix of Germany and Italy, below, we see that they are generally similar, although Germany skews much more toward manufactured goods. 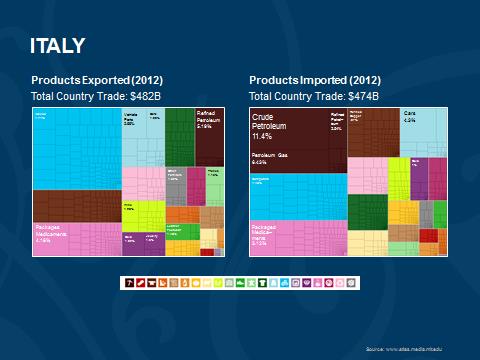 The tensions between countries, on an economic level, are readily apparent when we take the outside view.

The differences are even more pronounced from a fiscal balance perspective. Per the chart below, Europe as a whole is actually in slightly better shape than the U.S. 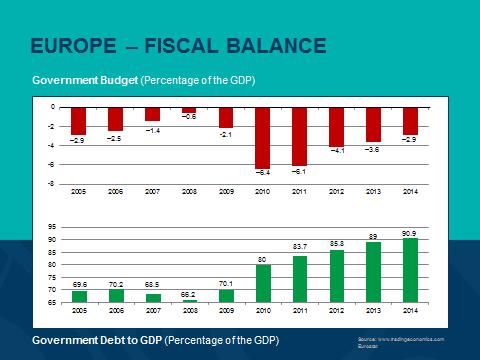 Looking at these maps from The Economist, though, you can see the wide range of both budget balance and debt that is contained in that average. Once again, Germany differs substantially from the eurozone as a whole, and especially from the other major economies. 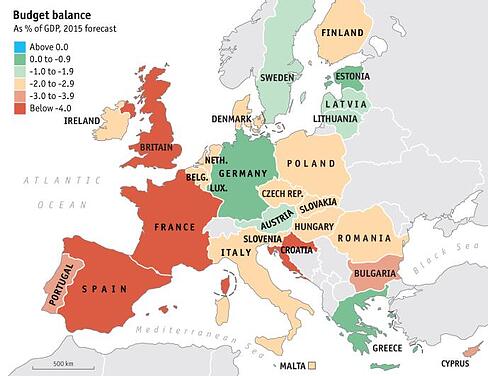 What will the ECB do? Given these differences, the European Central Bank’s hesitance to take stimulative action is no surprise. Germany is actually doing fine and, as the largest economy, has been against this type of move.

Even now, there is doubt as to whether the ECB will act and, if so, how much it will do. The rumor is that the ECB will print money but have the individual central banks do the actual bond buying—for their own individual countries. That would be like the U.S. Federal Reserve parceling out its stimulus for New York and California to buy their own bonds. If this happens, it would represent one more breakdown in the integration of the eurozone.

Can the euro survive? Finally, to the best of my knowledge, no currency union has survived in the long term without political union. We can see, looking in, the many differences between Europe as a whole and the individual countries, as well as the rising conflicts between countries. We know that successful currency unions without political union are, at best, very rare.

As investors, we need to focus on the very real risks that exist at a macro level in the eurozone. This is not a country-specific analysis, but rather a context in which any investment should be considered.

All good questions—and all things the outside view suggests we should ask ourselves.