The Employment Boom Gets Louder 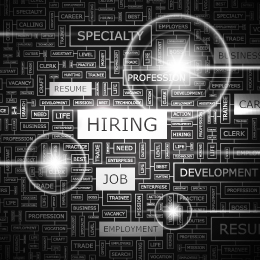 After taking a look at the bright side yesterday, more data has come across my desk that confirms just how reasonable (but not, of course, certain) that perspective is. One data point in particular puts some direct context around the reasons for optimism.

About six months ago, I made the case that we were at the leading edge of an employment environment like that of the late 1990s—a boom time by anyone’s definition. I was a bit nervous writing that post, but looking back at it now, the analysis has held up remarkably well. Let’s take another look at the data to see if, and how much, the employment market has improved over the past six months.

Comparing the current results to those of the late 1990s, the household numbers are better and have improved substantially over the past six months, while the business numbers are somewhat worse. Note also that both surveys show job growth at about the fastest rate we saw in the mid-2000s. In terms of the job creation rate, if the late 1990s were a boom, we are at least close. If the mid-2000s were a boom, we are already there. And, of course, this also includes significant improvement over the past six months, even in the face of an economic slowdown.

Unemployment. Another way to evaluate job market strength is to see whether employers are getting rid of employees. If we look at people filing for unemployment, we see that current unemployment claims have dropped over the past six months, are well below the best levels of the 1990s, and are even further below the best of the 2000s. On this metric, we are also in a boom—and the boom is getting louder. 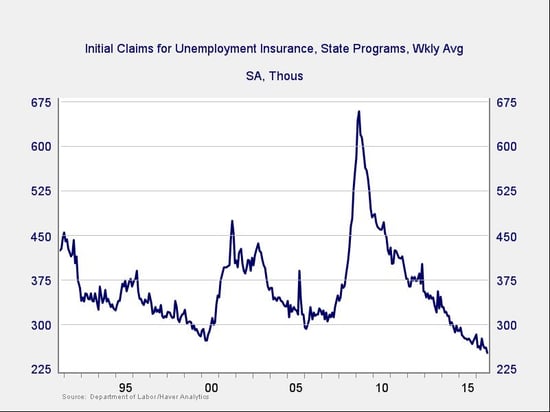 The workforce now, however, is much larger than it was in the 1990s or 2000s, so the reduction in layoffs is even more striking than it seems. If you look at unemployment claims as a percentage of the employed workforce, you see that we are doing even better than in the 1990s and are still improving. 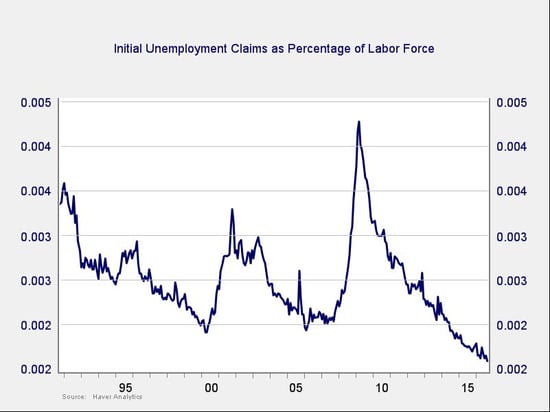 Wage growth. Another way to assess the health of the job market is to consider wage growth. Although slow growth has been, and remains, a concern, the most recent data does show an acceleration to the highest level in five years. 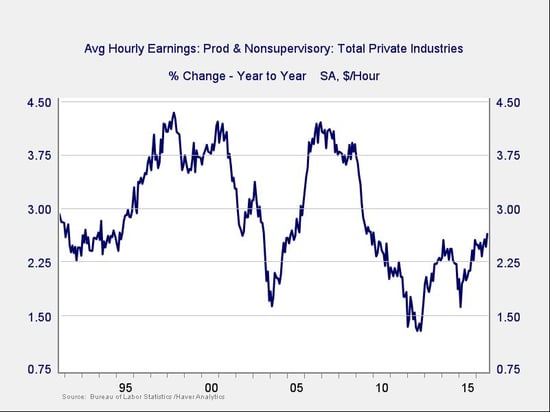 Another point we can take from this chart is that, when wage growth starts (in, say, 1995 or 2004), it tends to do so from a level close to where we are right now, and it tends to be rapid. We saw exactly that kind of growth from 2012 through 2014, and it may return to that acceleration level after the recent economic slowdown. This chart suggests that, although wage growth is not yet at peak levels, it is reasonably consistent with a significant acceleration in the next year or so.

Employment to population ratio. The final concern about the labor market is how many people have simply stopped looking. Even here, we see good news. The employment to population ratio has recovered substantially, and though still well short of the levels of the late 1990s, has closed almost half the gap. Much of the remaining gap, however, may be explained by demographic reasons, as baby boomers retire and move out of the labor force. 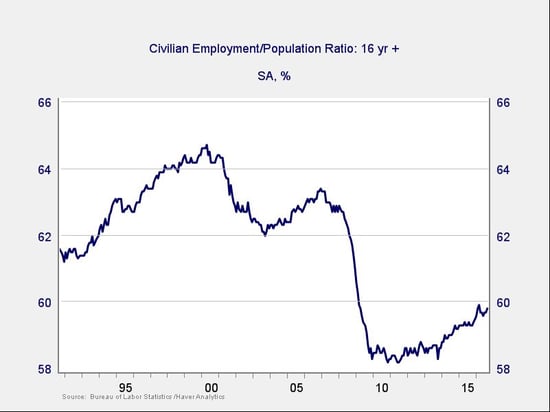 Let’s just call this a boom

Overall, as job growth continues at strong levels, layoffs are at extreme lows, and even wage growth shows behavior consistent with the early stages of a boom, it’s getting harder and harder not to simply characterize it as such. There are still headwinds, to be sure, but I will be using fewer and fewer qualifiers. I wrote six months ago that the day I drop them entirely is probably sooner than you might expect, and I think we have now reached that point. Boom.