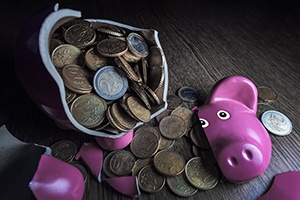 There’s an important—and potentially very disruptive—issue that has been largely ignored during coverage of the health care debate. The U.S. government hit its borrowing limit on March 16, 2017. Yes, that’s right—the U.S. borrowed as much as it legally can four months ago. Since then, the Treasury has been using the usual “extraordinary measures” to fund the government, including “borrowing” from government pension funds, diverting various funds tasked to other purposes, and looking for spare change in the laundry and the washer to pay the bills. Okay, maybe not the last one, but the other measures are happening.

This has worked so far, but we’re getting close to running out of money—except we don’t know exactly when we will run out. Tax receipts, for example, have been running slower than expected, pulling the anticipated drop-dead date back from sometime in October to, quite possibly, late summer. In other words, the U.S. government could be unable to pay its bills in the next month or two. This is a big problem.

We’ve seen this movie before: in 2015, when I discussed in detail the actual process to default; and in 2013, when I presented a not-so-modest proposal on how to solve the problem. There seems to be a pattern here—one where, every two years, we reach a crisis point and Congress has to agree to raise the debt ceiling.

In the abstract, it’s hard to see what the problem is. All of the borrowing is to pay for spending specifically authorized by Congress itself. Not raising the debt limit is equivalent to whipping out the credit card and then not paying the bill when it comes due. This has not stopped the debt ceiling from becoming a perennial problem, however.

Part of me says this time will be the same as last time. We will see both sides pushing to get maximal concessions on their priorities, trying hard to use the risk of not raising the limit to force agreement on their terms. This will continue until the 11th hour, when they finally come to an agreement that puts the problem off for another couple of years. This is what I truly expect, so look out for extensive media coverage, predictions of doom, posturing on both sides, and an eventual agreement.

It may actually play out differently this time, though. Today, the two sides are no longer the Democrats and the Republicans, but the factions within the Republican Party itself. The Democrats will vote for any reasonable deal that raises the debt ceiling, with “reasonable” defined as something close to the status quo. Many Republicans will as well. If there are enough of them, we will get the solution I outlined above.

There is, however, a minority of congresspeople who might be willing to block action on the debt ceiling to pursue their own goals. We saw this with the health care bill a couple of times, with the initial failure in the House and the recent failure in the Senate. Now, we are seeing signs of this in the budget negotiations. There is a real possibility we will see it in the debt ceiling debate as well.

The risk level is rising

Markets are starting to take notice. The spread between the yield of the six-month and three-month Treasury bills has dropped close to zero, reflecting that the three-month bill’s payment, due in October, could be at risk.

What should we watch for? Whether Congress takes action to raise the ceiling before the August recess. If so, the problem goes away. If not, members will be working against the clock when they return. Of course, action is probably unlikely before August, but watching how the Republican conference in particular is positioning the issue should give us a good idea of how this might play out.

It has been a hot summer in Washington, DC so far already, and it looks likely to get even hotter.