There has been some minor weakening of trends from last month, but only at a level that appears reasonable and typical for the news we have had and for this stage of the cycle. Overall, the data hasn’t changed much. It remains positive in all areas, and we’re continuing to see substantial improvement in business confidence in the service sector.

One area I was a bit concerned with in August—consumer confidence—actually bounced back strongly. This suggests that the slight weakening I’m seeing in other areas is not a cause for concern at this point.

As we move through the year, I believe the economic forecast remains solid. 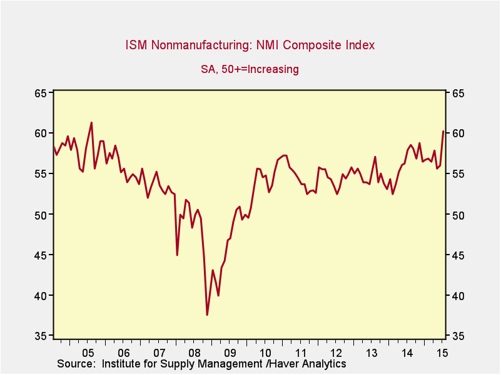 Despite a small decline from last month’s record-setting level (not shown in the above chart), this indicator remains at one of the highest levels in the past 10 years. This suggests that this significant sector of the economy remains quite strong, despite headwinds from elsewhere in the world. Continued strength in the service sector is consistent with business confidence; as a representative sample of the largest sector of business, this is an important leading indicator. 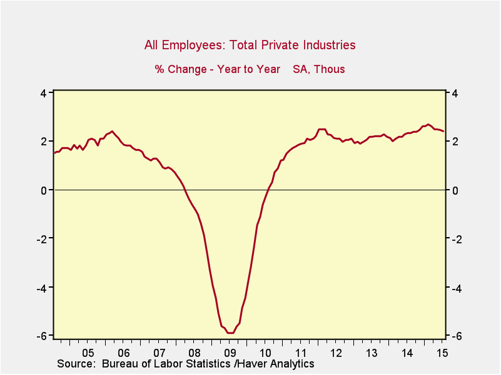 Private employment growth year-on-year has continued to be strong, remaining close to its highest point since 2012. Although growth has slowed over the past several months, this is expected as excess labor starts to become scarce and is not yet a reason for concern. Because this is an annual figure, the changes are slower and smaller than those we see in more frequently reported data, but employment growth continues at healthy levels. 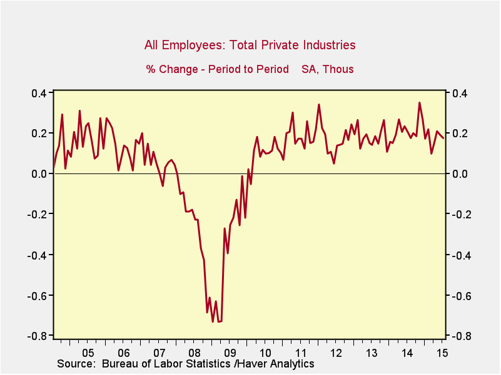 These are the same numbers as in the previous chart, but on a month-to-month basis, which can provide a better short-term signal. Despite a slight decrease from last month, job growth remains at a healthy level, consistent with levels seen in the recovery so far. 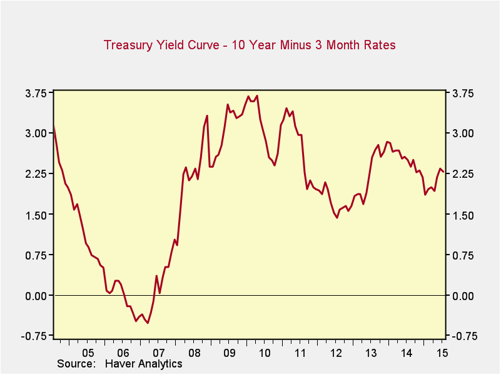 Rates for both the 10-year and 3-month Treasury securities were quite volatile over the past month. Although both ended the month close to where they started, the spread narrowed slightly. Still, the spread between long-term and short-term rates remains at healthy levels. This metric has not changed despite the prospect of the Federal Reserve starting to raise rates. 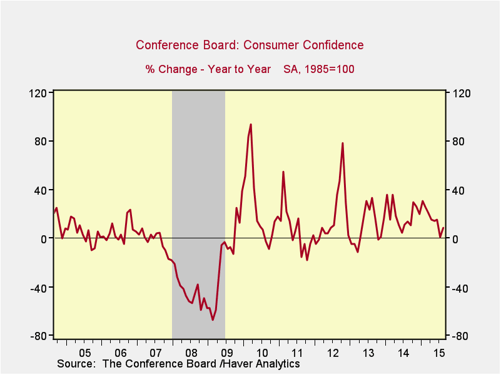 After last month’s decline, consumer confidence rebounded strongly and recaptured all of its losses and slightly more, bringing the year-on-year change back into positive territory. On an absolute basis, it remains at one of the highest points since the financial crisis.

All of the major signs continue to be positive, with strong service sector confidence a particular bright spot and the recovery in consumer confidence a relief. Despite continued international and financial market turmoil, the fundamentals of the U.S. economy remain in good shape.