Why You Should Stop Worrying About Slow Growth 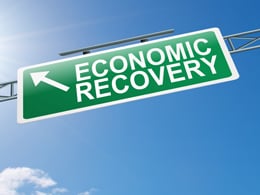 This afternoon, I’m speaking to a group of investors on the subject of worry—worry about the economy, about investments, and about meeting their financial goals. A couple of years ago, we were worried about high oil prices, China taking over the world, and a weak dollar, to name a few. Now, of course, we’re much wiser: we worry about low oil prices, Chinese collapse, and the strong dollar.

So what should we be worried about? Another major theme has been the slow economic recovery, both in the U.S. and globally. There’s a general sense that growth is below what it “should” be and the shortfall is a sign that the end is, once more, near. But is that really the case?

As with most economic worries, the cure here is a dose of context and perspective. In order to stay focused on the bigger picture, I usually ignore the monthly or quarterly data, looking instead at year-on-year changes. To see if our growth worries are reasonable, it’s valuable to take an even longer-term approach.

Sluggish growth after a crisis is normal

You may remember a book about the financial crisis called This Time Is Different, by Carmen Reinhart and Kenneth Rogoff. The authors reviewed financial crises and collapses over the centuries, concluding that 2008 was a normal (if very severe) crisis, consistent in many ways with past ones. Based on that data, they found that it takes seven years, on average, before a country returns to pre-crisis levels. The book was widely read and analyzed at the time, but its lessons now seem to have dropped off our radar screens.

That’s a shame, because it offers a worthwhile lens through which to view the current recovery. As it turns out, the U.S. took seven years to regain its pre-2008 economic level—exactly in line with the average, and not all that bad when you consider the severity of the crisis. In other words, the slow growth we’ve experienced is exactly what history would have suggested we should expect. In that light, current performance doesn’t look so terrible.

What's more, previous recoveries have typically included government spending increases, but U.S. government spending has actually been cut over the past several years. If fiscal policy had been more aggressive, we likely would have recovered earlier. The same arguments apply to the rest of the world. Europe, for example, is recovering more slowly than the U.S., but it has also been more negatively affected by politics and government spending cuts.

Other facets of Reinhart and Rogoff’s analysis are less encouraging. Excessive debt should continue to drag on growth—and again, that’s something we are seeing around the world. On the other hand, as painful as the extensive debt write-offs were after the 2008 crisis, they have cleared the decks for faster U.S. growth in a way that still hasn’t happened elsewhere in the world.

The thing to keep in mind is that, here in the U.S., the economy is actually on track and perhaps even doing better than might have been expected. In this context, some frustrating trends—for instance, higher consumer savings rates and lower spending growth—can be seen as positive factors that are helping to stabilize and accelerate the recovery over the long term, even as they slow growth in the short term.

That’s not to say that slow growth doesn’t present real problems (it does) or that we don’t have things to worry about (we do). The point is that we need to recognize slow growth as a symptom, not a cause—and instead of focusing on symptoms, we should be worried about causes and how to fix them.