Why the Weak GDP Report Is Nothing to Worry About 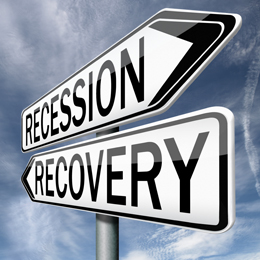 As expected, this morning’s GDP report wasn't cause for celebration. The initial estimate of economic growth in the fourth quarter of last year came in at 0.69 percent on an annualized basis—well below the previous quarter’s figure of 1.98 percent and even further below the fourth quarter of 2014, which posted growth of 2.07 percent.

Bouncy data, but no recession

In the chart below, we can see a decline in the GDP growth rate from mid-2014. Clearly, with this kind of decay, the economy is tanking and we’re headed into a recession, right? Not so fast. 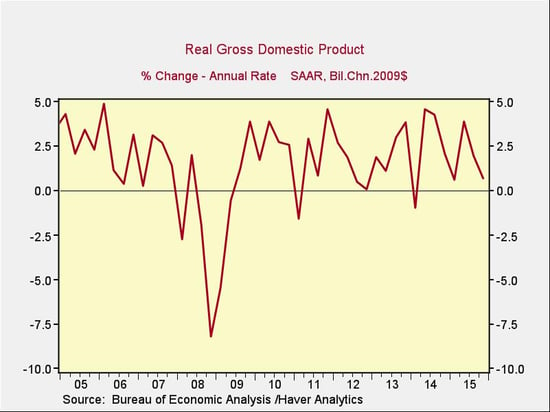 What the chart tells me is that these numbers move around a lot on a quarterly basis. In the recovery so far, we’ve seen two quarters with negative numbers (in 2011 and 2014) and three other quarters that showed growth below that of last quarter. In other words, of the 24 quarters since 2010, more than a fifth of them had results worse than what we see now. And yet, the recovery continued.

I’ve written before about different ways to look at data (a post I recommend both for the topic and for the wonderful Hokusai images I included in it). My point about the benefits of viewing data from different angles also applies here. With that very bouncy data series above fresh in our minds, let’s look at economic growth on a year-to-year basis.

Here, the pullback doesn’t look so bad. We ‘ve seen a downturn in the past couple of quarters, but that puts us back at the level of early 2014, not headed into the ground. Although there has been a clear slowdown, growth remains positive and, on a year-to-year basis, not nearly as bad as the quarterly figure suggests.

So, what's behind the slowdown?

There were a few negative factors at work:

Of these factors, consumer spending growth and the inventory adjustment are likely to improve, while business investment and net exports will probably continue as headwinds. Even those, however, are showing signs of moderating.

Will this continue (or get worse)?

It might. But, looking at the other components of the data, it’s much more probable that growth will revive, exactly as it has done after previous slowdowns in this recovery.

In that scenario, overall growth would remain at 2 percent to 2.5 percent, levels that we have seen for the past couple of years—not great, but certainly no recession. If manufacturing or net exports improve even slightly, which is quite possible if the dollar stops rising, we might do even better.

Looking at the big picture, last quarter's growth is certainly nothing to cheer about, but neither is it cause for panic. The occasional weak quarter is simply part of the normalization of the economy.

There will be a great deal of angst in the media today, but just wait. Things will continue to improve, but maybe not as quickly as we would like.