Today’s post is inspired by Thirty-Six Views of Mount Fuji, a series of woodblock prints by the Japanese artist Hokusai that depicts the same scene from various perspectives, yielding very different images. Data can be viewed the same way, with various angles giving different impressions and potentially leading to very distinct conclusions. 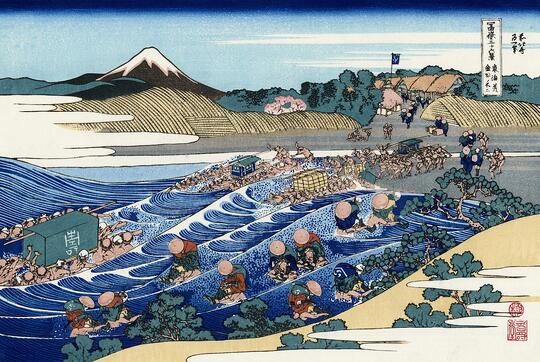 When I review economic data, I like to take several different views and compare them, to see if my perception changes. Approaches include looking at the data series itself, the change from period to period and from year to year (both on a percentage and actual number basis), using statistical measures such as standard deviation and multi-month averages—the list goes on and on. Any one data set may be better suited to certain techniques, but the idea is valid across the board. 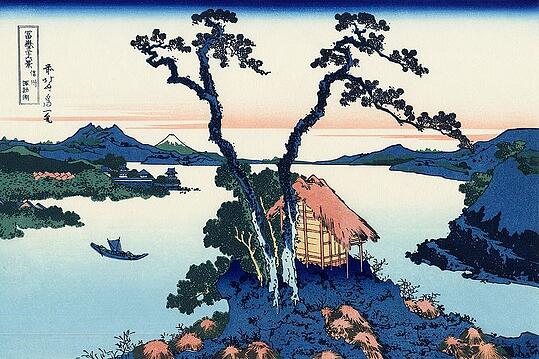 What brings this to mind is the disappointing initial jobless claims report that came out this morning. At 329,000 (up from the previous 305,000), it seemed to signify some weakening of the job market, contradicting other recent data. But let’s look at some other ways to view this report. 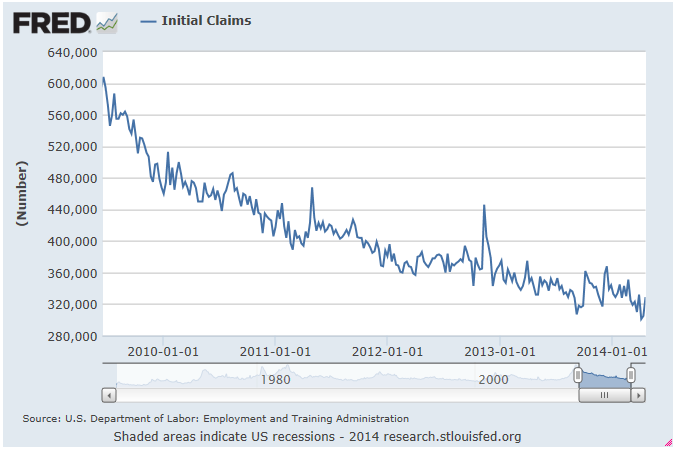 Based on the raw data, it appears that, despite the increase in the past week, we’re still at very low post-recession levels, well within the normal “noise” range. Let’s look at the numerical change week-to-week, to see where it fits. 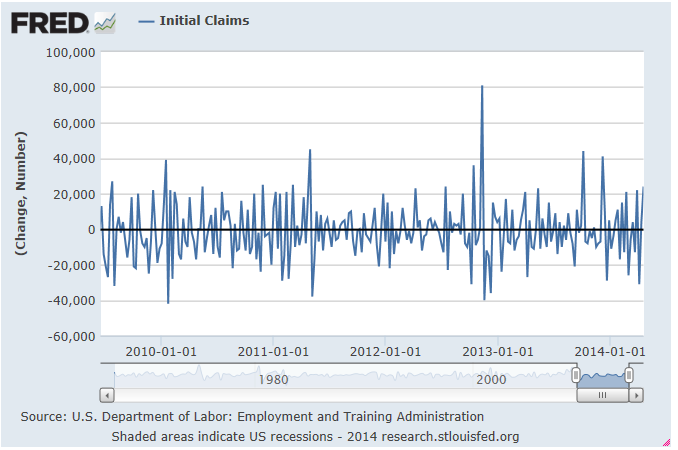 The change is within the usual range, but at the higher end. Interestingly, the volatility in claims appears to have increased this year, which may diminish the significance of the change. Let’s look at the change from a year ago. 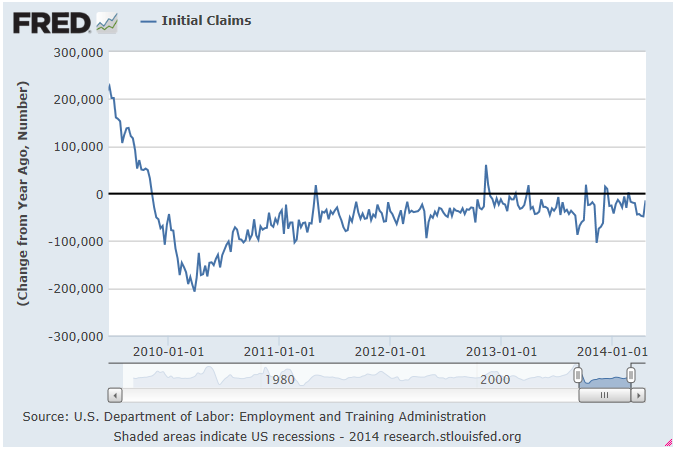 Again, this is within the normal range, but the decline is getting smaller, suggesting that either the jobs recovery is slowing or that the economy is starting to normalize. 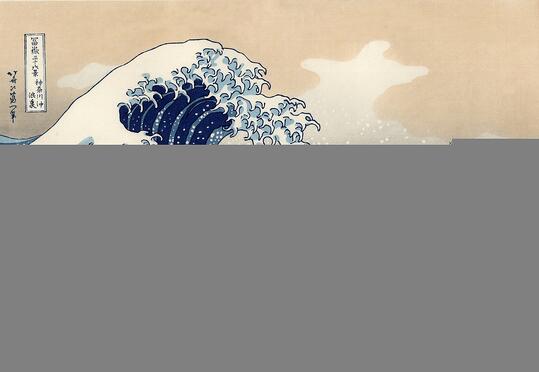 These were three views of the raw data. Now let’s look at the numbers in a different way, using a four-week moving average to smooth out some of the week-to-week volatility.

We see that, unlike the noisier signal from the raw data, the trend remains down; in fact, we’re almost at the lowest level since the recession. The recent weekly increase shows up as a very small blip. 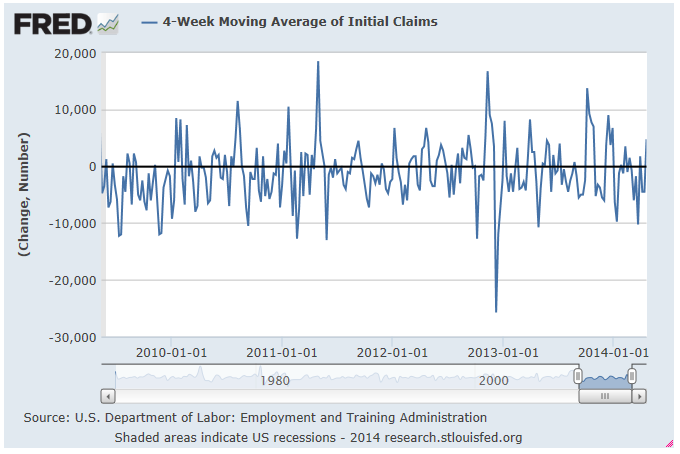 If we look at the numerical change, we see that it is, again, much smaller but that it’s been rising for the past four weeks, suggesting a possible slow shift in the trend. 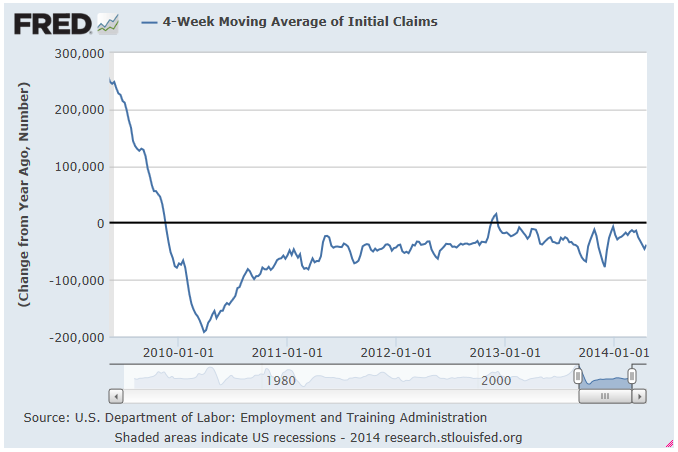 Looking at the average’s change over the past year, we see that the situation has been improving, on a year-to-year basis, over the past four weeks – contrary to what the previous chart suggests. 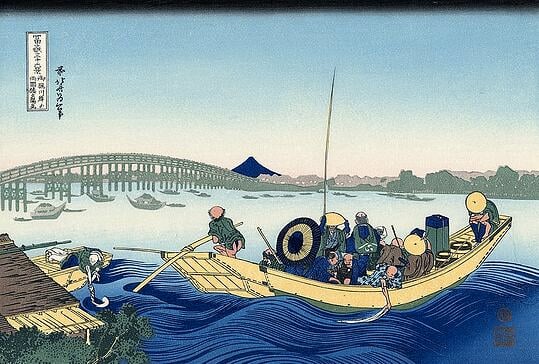 Although we used the same underlying data, which on its face is somewhat concerning, different views of it yielded several other points that weren’t apparent in the first analysis. These multiple views offer a more rounded and much less alarming picture. While the shorter-term weakness certainly isn’t a good thing, on a year-to-year and multi-week basis, the positive trends remain strong.

Almost every data point you hear about in the media benefits from this sort of treatment, but it’s not done as often as it should be. In the future, I plan to do more of this type of analysis here on the blog—albeit without the exceptional artwork I’ve included in this post.