Why Is the Fed So Worried?

This week’s market melt-up has been widely attributed to the release of the Federal Reserve’s meeting minutes. More or less, the Fed said it was worried about global growth and would probably be slower in raising rates than many had expected.

The effect on the market was substantial, which prompts a number of questions. But the one I want to talk about this morning is why the Fed is so worried.

After all, looking at the economic indicators I follow, they’re all green lights. There’s really no sign of a recession in the next 12 to 18 months. At around 4 percent year-on-year for the past couple of years, growth isn’t bad.

Growth's steady, so what’s the problem?

The issue is that 4-percent growth isn’t enough for takeoff. The Fed remembers the 1930s, when the economy seemed to be recovering. When rates went up, though, the economy fell off a cliff. The Fed is terrified of that outcome—and is determined not to let it happen again.

If you look at growth levels now versus the last recovery, in the mid-2000s, you can see quite clearly that we’re growing at a much slower rate, at around 4 percent versus 7 percent. That gap has to close before the Fed will really feel comfortable. 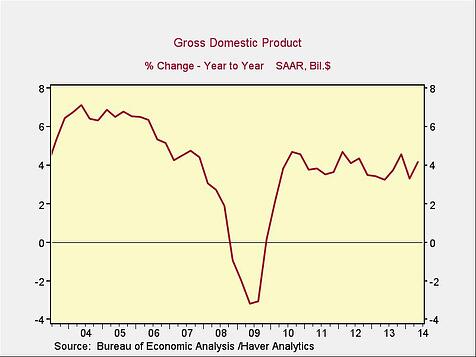 Can consumer spending pick up the slack?

If we consider where growth could come from, the only possible area is consumer spending.

So, the question of economic growth essentially revolves around consumer spending. Spending growth has been around 2 percent—again, well below levels we’ve seen in previous recoveries. In short, an economic takeoff won’t happen until consumer spending picks up.

The question we have to answer, then, is this: Can consumers spend more, and if not, what would have to change so they can? This takes us into the realm of jobs and wages, which I’ll discuss in an upcoming post.