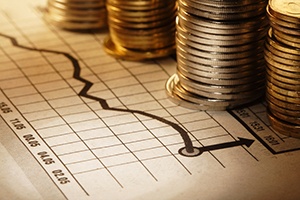 The term recession is having a moment. There is talk of a manufacturing recession, an earnings recession, and, the big one, an economic recession here in the U.S. Worry has been rising with the headlines of slower growth, especially with the recent inversion of the yield curve. Recession is a bad, bad word.

I deal with the risk of economic recession elsewhere (spoiler alert, not yet!). But one of the questions I have been getting recently is what the risk of an earnings recession means for the stock market. Earnings are good and recession is bad, so surely this type of recession is something else to worry about?

Before we dive in, let’s define our terms. In this context, “earnings recession” is usually interpreted as two consecutive quarters of decline. In the case of the market, that would mean that corporate earnings dropped for two quarters in a row. Even this definition, however, is imprecise. Do we mean they dropped quarter-on-quarter, or do we mean they dropped over the prior year for two quarters in a row? And what kind of earnings are we talking about? Reported or operating? And, the big question, when we do get an earnings recession, what will it mean? Anything?

Let’s do the math

I asked two of my colleagues on Commonwealth’s Investment Management and Research team, Sam Millette and Tom Ryan, to dig into this question—and they found some very interesting results. First, no matter what definition you use, based on the S&P 500 companies, we won’t have an earnings recession this quarter. Earnings were down materially in the final quarter of 2018 but were up again last quarter. So, this quarter can’t have two consecutive quarterly declines as called for by the definition. On an annual basis, both quarters show year-on-year growth. So, again, no earnings recession. Based on data directly from the S&P website, the math simply doesn’t indicate a problem. This math holds for both reported and operating earnings on a per-share basis. 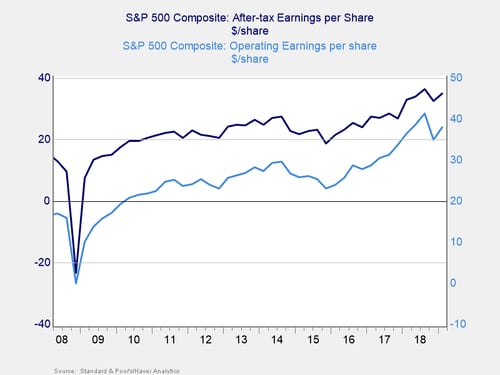 So, where are the concerns coming from?

Looking at the chart above, we can see that the decline last year was substantial. Further, the first-quarter rebound still leaves earnings below where they were for the second and third quarters of last year. After strong second-quarter growth in 2018, weak second-quarter 2019 data could take the annual change to negative quite easily. Certainly, we do see weakening conditions, and they could get worse. We also see, however, continued growth despite one weak quarter. Current conditions, therefore, are not as bad as some reporting would suggest.

Even if we do end up getting an earnings recession—and remember, that will not be this quarter and probably not next—it doesn’t mean the end of the world. In fact, if we go back 10 years, we can see that we did have an earnings recession in 2012 and 2014–2015. Earnings, both reported and operating, were down the requisite two consecutive quarters in 2012 and six quarters in a row in 2014–2015. That wasn’t a great time for the economy or the markets, but the expansion continued and markets are higher now than they were back then. Even when we do get an earnings recession, it will be something normal that happens on a regular basis. 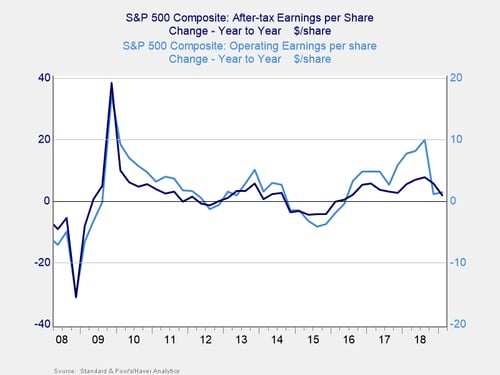 Right now, just as with the economy as a whole, the headlines for earnings are markedly worse than the actual data suggests. We do see weakening and risks are rising, but conditions remain basically positive. When you factor in that actual earnings growth usually comes in above expectations, the picture looks even less worrisome. We will see an economic recession and an earnings recession at some point—but not this quarter.