Welcome Back to Politics and Some Familiar Threats to the Economy 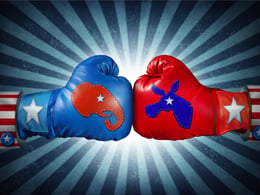 As the U.S. economy has been normalizing—even moving back to good times—politics has been what I can only call denormalizing. In one more back-to-the-future moment, I am now substantially more worried about political threats to the economy than I am about economic threats.

There’s a line I used to use in speeches, during the days of the fiscal cliff, that comes from the movie Independence Day, a wonderful alien-invasion B movie whose poster shows the aliens blowing up the White House. I would put that poster up on the screen and say, tongue firmly in cheek, “The aliens come and destroy Washington. But, later on, it turns out they are actually hostile.” I haven’t used that line in a while, but I can see that I will be pulling it out again.

Like last time, we actually hit the ceiling several months ago (in March) and have been using the Treasury’s “usual emergency measures” to pay bills since then. This includes raiding various pots of federal cash. And, again like last time, we do not know exactly when the Treasury will run out of money, but the betting is for sometime late this year. So, although this is not an immediate problem, it is one that will very likely rock markets when the time comes.

Presidential politics will cloud the issue

That’s because, just about the time we run out of money, the presidential primary season will be starting, pulling presidential politics into what was already a pretty fraught process in Congress itself. Ted Cruz, who filibustered the last increase in the debt limit, will almost certainly do his best to make it a central issue in the Republican race. Besides that, insiders are saying that there is no way the Republicans in the House will vote for any debt limit increase, bringing us back (again) to where we were last time.

What is really fascinating, though—beyond the immediate fiscal cliff and potential government shutdown issue—is how the Republican thinking on taxes is fragmenting the party even further. While large parts of the House continue to adhere to anti-tax orthodoxy, both Donald Trump and now Jeb Bush have stated that, in some circumstances, they are for higher taxes on the wealthy. I wrote the last time around that taxes would be going up, someway and somehow, and this may be the first crack in the Republican wall on this issue. In the short term, though, it will increase the fragmentation of the Republican Party and make governing even harder.

I have all faith that we will ultimately raise the debt limit and avoid default, but the ride may well be a lot rockier this time around, given all of the intersecting political players. Although I remain optimistic about the economy, I think we can expect considerably more trouble ahead from the politicians.