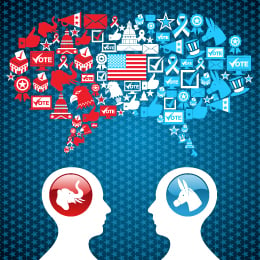 Newspaper reporters (and bloggers!) are breathing a sigh of relief as the new Congress gets closer. Just as the economic worries are subsiding—at least here in the U.S.—political risks can move back to the front page. As someone who writes a blog post every day, all I can say is thank goodness.

As a citizen, though, I am somewhat (but not yet very) concerned. We’re facing another federal spending bill this week, to fund the government past Thursday. While John Boehner plans to pass the bill, some Republicans, notably Ted Cruz, are trying to make this a confrontation, payback for President Obama’s executive action on immigration. The question is whether or not they will succeed.

My bet is no. The Republicans suffered real political damage after the last shutdown, for very few actual gains. Further, as the party that will control Congress, the Republicans own any problems in a way they did not last time, opening them up to even more potential damage. Party leaders in both houses know this perfectly well, and they’re working to avoid a shutdown.

A clue to what the next few years may look like

In many respects, this week should give us a feel for how things may go over the next couple of years. If the radicals succeed in engineering a confrontation, we know the circus is back in town. If, on the other hand, Speaker Boehner and Mitch McConnell can push the funding bill through without drama, we are back to normal politics.

Normal politics, however, just constrains the risks—it doesn’t eliminate them. With the Republicans in control of the next Congress, and the Obama presidency entering its lame duck period, both sides will be tempted to make stands rather than policy. Given the history of relations between Obama, Boehner, and McConnell, there’s a real risk that nothing could get done.

Yet all of them have substantial incentives to make things work—Obama to create a legacy, Boehner and McConnell to demonstrate that the Republicans can actually govern before the 2016 presidential election. It seems more probable that we will see a productive Congressional term, just as happened with Bill Clinton and the Republican Congress then.

We’ll know soon if the circus is returning to town

Unlike most political and economic questions, this one will probably be at least partially answered in the next week. If we get continued government funding, without drama, we can probably largely write off political risk for the next couple of years. If not, count on an extended run of dramatic high-wire acts.