Looking at the effects of Cyprus echoing around the financial markets, one thing that’s become apparent is that it really isn’t all about the U.S. any more. Even as the U.S. economy continues to recover, the international press doesn’t care that much. We are a much smaller piece of a much bigger pie. Still the largest piece, still important, but not what we were.

Some of the perennial questions I get from clients arise from our diminished place in the scheme of things. What happens, for example, if the dollar collapses? Given the central role the U.S. occupies in the world financial system, the standing answer has been that it won’t happen any time soon. World trade is denominated in dollars, the world’s low-risk reserve currency. Under current conditions, there is no alternative.

In the absence of a single overarching theme today, I thought I’d hit a bunch of smaller points that are important but don’t warrant individual posts.

Based on some of the commentary about Cyprus, particularly in the New York Times, it would seem that the country is so small that the crisis there essentially doesn’t matter. I understand what’s behind this view, but I think it misses the point. Let’s take a closer look at why Cyprus does matter and how it could create some very unpleasant consequences in ways that perhaps aren’t immediately obvious.

Here’s the short explanation: Germany and the other major economies have decided they’re done paying any price to keep the eurozone together. A failed Cyprus bailout probably means that the country leaves the eurozone. For Greece, the rest of Europe was willing to pay almost any price to keep that from happening. Now they’re not. This is a big change, and it has implications for every country in Europe.

I’m meeting with my accountant this evening to go over my finances and prepare my tax return. Although I like my accountant and enjoy catching up, I’m not looking forward to it because I always end up owing money. I set aside as little as I can throughout the year, so the question at tax time isn’t whether I owe, but how much. I know I could easily avoid this by having more withheld, but I dislike giving the government an interest-free loan more than I dislike writing the check.

What I try to remember is that my life is much, much easier on the tax front than it used to be. Once upon a time, I owned and managed a couple of different companies. Accounting and tax issues took up more of my time than I could initially believe. Now that I’m a W-2 employee, albeit one with various investments that create their own complications, life is easy. Sort of.

Yesterday, I posted an update on the rising risks in Europe. After I wrote that piece, I spent some time thinking about other risk areas that have fallen off the radar screen a bit and decided that today would be a good time to address those as well.

When I saw the above headline in today’s New York Times (page A3), I have to admit I was taken aback. All of the discussions I have heard about nuclear war recently have been metaphorical, typically centering on how Congress is dealing with something. This one isn’t. Reading the article is scarily reminiscent of civil defense drills that I am just old enough to remember—when we stood in the central hallway of the school, facing the wall with our hands over our heads.

I couldn’t have asked for a better reminder that even as economic risks recede—and they are receding—there are a number of geopolitical risks that will come back to fill that worry-space. The relationship between India and Pakistan is certainly one risk; another is Japan and China, where, as of yesterday, both countries were sending fighter jets to the disputed Senkaku/Daioyu islands.

I hope everyone enjoyed the long weekend as much as I did. My son, Jackson, and I built a small working wooden catapult and a fire-dog house using his cardboard blocks. And he went skating and to a SteveSongs concert with his mom. 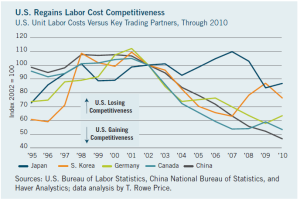 China has been in the news quite a bit recently, and it is past time to take another look at what is going on in the second-largest economy on the planet, especially since it is one of the keys to global growth going forward. China matters, as everyone knows, but it may matter for different reasons going forward than it has to date.

One of my favorite authors is Terry Pratchett, best known for a series of novels about the Discworld, a fantasy world (very) loosely based on medieval London and Europe. When you hear “fantasy,” though, don’t think unicorns and rainbows; instead, think folklore and Charles Dickens. Pratchett’s writing is an interesting combination of Dickens and Douglas Adams (The Hitchhiker’s Guide to the Galaxy), with more than a bit of P. G. Wodehouse thrown in. The series is worth a look, but the later books are better than his earlier ones, in my opinion.

One of the tropes of Pratchett’s universe is “narrative causality,” the notion that stories are entities that actually shape behavior in the real world. As he writes in The Last Continent, “. . . the proliferation of luminous fungi or iridescent crystals in deep caves where the torchlessly improvident hero needs to see is one of the most obvious intrusions of narrative causality into the physical universe.” Obviously, narrative causality doesn’t extend into the physical universe here, but it does extend into the behavioral universe. Therefore, it’s worth considering in terms of economics, which, after all, is just human behavior writ large.

There is not a lot in the way of breaking news today, which is a good thing, but I think two articles are worth a look. They illustrate that there really is a healing process under way and that, despite all of the kvetching (of which I am certainly guilty), we really are making progress.