China has been in the news quite a bit recently, and it is past time to take another look at what is going on in the second-largest economy on the planet, especially since it is one of the keys to global growth going forward. China matters, as everyone knows, but it may matter for different reasons going forward than it has to date.

China has made much of its success so far on being the cheap labor option. The “China price” sucked manufacturing jobs out of countries around the world and into a market with little regulation and tens of millions of rural migrant workers who would compete for jobs at wages so much below those of other countries that, even with lower productivity, locating manufacturing there was an obvious choice.

This is no longer the case. Brian Berghuis, a portfolio manager at T. Rowe Price, offers a very good analysis on this topic that lays out just how much less competitive China has become. He does so in the context of a U.S. manufacturing revival, which I have mentioned before, but the key point I want to make is that the relative cost advantage of China has dropped significantly, per the following chart. 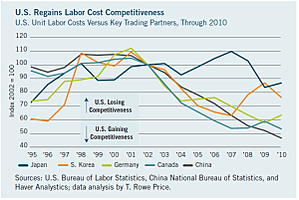 The changing economic narrative is also showing up in the press; today’s Wall Street Journal, for example, has “China Begins to Lose Edge as World’s Factory Floor” on the front page. When something hits the front page of a major paper, you know it is mainstream.

With the rising labor costs, profit margins have declined, and many businesses have had to borrow more. The government has placed most emphasis on maintaining employment and has released credit to support the economy and keep employment high; it has worked. On the economic front, a Chinese slowdown has reversed into renewed growth, based on successful government action, and the narrative reflects that.

The narrative on China’s government, however, has also changed. Coverage of the Bo Xilai scandal, where a major politician was brought down even as he tried to ascend to the peak of power, substantially changed the Western coverage of China’s government, and recent stories have centered on pollution in Beijing—which is literally off the charts—and press censorship. A presumption that the Chinese government has things under control has started to shift to the reverse.

Even in the successful soft landing, the narrative is looking for cracks. As the Chinese government is perceived as less in control, and as the economy is considered weaker, the financial system is getting scrutinized harder. On the New York Times website today, one of the major stories is “Is Something Toxic Buried in China’s Financial System?” To ask the question is to answer it, in this context, and the article refers to a Chinese article (read it here in English), that examines the potential risk from the Chinese shadow banking system.

Like the U.S. prior to 2008, China has experienced significant economic growth, as well as a boom in both debt growth and the expansion of new financial products that are marketed widely but in many cases not well understood. This has also driven an expansion of the financial industry, aimed at providing the retail investor access to real estate development and similar projects. The article, written by the chairman of the Bank of China, highlights liquidity risks, notes that a growing share of Chinese deposits and loans are now in the shadow system rather than the regulated banking sector, and even speculates that the declining bad loan rates in the regular system are because many of the riskier loans are choosing to operate in the shadow space. The term Ponzi scheme is mentioned.

This may sound familiar to the U.S. reader, as we lived through many of these factors ourselves in the last five years or so. The fact that the chairman of the Bank of China is saying it is good news, in that there is obviously more of an official awareness of the problem than there was here, but it’s bad news in that it is one large problem.

I have been a long-term China skeptic, and it seems that although China has so far done better than I expected, there are many issues that remain unresolved. One thing we have learned is that eventually systemic risks have a way of catching up. I hope China manages to avoid that, but the changing narrative—in China as well as in the West—suggests that is not certain.