The Outside View: Russia 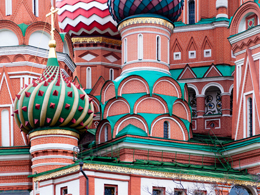 As I mentioned yesterday, Russia’s economy basically doesn’t work without oil. Today we’ll take a deeper look at that problem, along with the potential consequences as Russia attempts to deal with it.

An economy that depends on exports

Brazil, if you remember, is a natural resources exporter, and, as such, has been suffering from recent declines in commodity prices. But it’s less exposed to world markets than many major countries, with a diversified mix of exports and a relatively small exposure (as a proportion of its economy) to exports, so the damage has been limited.

Russia is not so lucky. As the chart below shows, Russia’s exports account for more than a quarter of its entire economy—much the same level as China, and higher than any country except Germany.

In short, Russia’s economy depends on exports. Looking at the numbers, a 20-percent decline in its export prices could send the Russian economy directly into a severe recession by knocking around 5 percent off of economic growth.

And it gets worse. As you can see from the following chart, energy makes up two-thirds of all exports, or around 15 percent of the Russian economy as a whole. Minerals account for much of the rest. Manufactured goods account for a very small part of total exports, which means that Russia is dependent on world markets for its economic success. 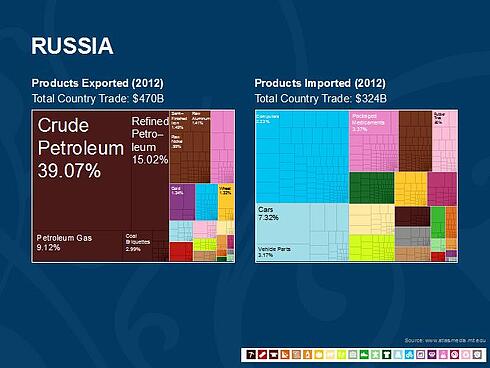 The country simply does not control its own destiny. With oil prices down 50 percent, that’s a 5-percent direct hit to the Russian economy, plus the damage from declines in the prices of other commodities.

Not enough money to go around

As bad as the current situation is, Russia could weather it. As you can see below, government debt is quite low, and the budget is generally in balance. 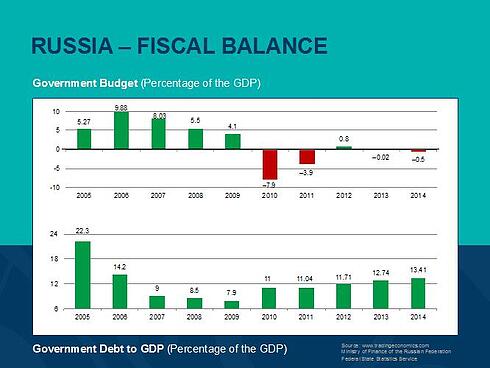 By borrowing and using its extensive currency reserves, acquired during the good times, Russia should be able to ride out an extended period of low energy prices. There’s no fundamental reason Russia can’t adjust and move ahead, just as Brazil is doing.

Here’s the problem: economic sanctions. Russia’s invasion of Ukraine has prompted Western countries—the U.S. and Europe—to curtail Russian companies' borrowing from Western banks. The major Russian companies, of which the oil and gas giants are the most important, have large debts coming due in the next couple of years that have to be repaid—and which, under sanctions, cannot be rolled over. Unable to find the money to pay the banks back, companies are seeking funds from the Russian government.

Capital is not a luxury. It’s needed to invest, to build, and to maintain and grow a country’s assets. It is also needed to import food and manufactured goods, which the country does not make domestically. Capital is essential for the continued operation of the country, and cutting off Russia from the Western capital markets is a crippling move.

Conclusion: Russia’s in a bind

The country’s income has gone down, along with oil prices, while its need for cash has gone up. And it’s not just companies that want assistance; money has been spent to support the currency—you recall the recent ruble crash—import food and consumer goods, pay for the army and defense forces, and all of the other things a modern state provides. There simply isn’t enough money to go around.

Which brings us back to yesterday’s post and the dangers of a desperate country. For very different reasons, both Greece and Russia find themselves at an economic dead end, with very limited options for changing course. They have a choice: either roll over and accept it, or change the rules of the game.

Greece is attempting to do just that, and any ancillary damage to the system is simply a price that must be paid. Russia is trying the same thing, but the system in question is much larger, and the damage may be much greater.