The Old World: Where We Came From

I closed my post two days ago with the observation that the now world—the world optimized around economics—has changed significantly from what came before it. It really became different this time, within the lifetime of most of the readers of this blog. To prove it, I offer this picture. 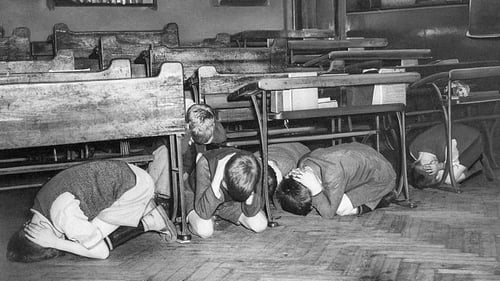 Most readers of a certain age will recognize this immediately. This was the duck-and-cover drill you practiced in school to protect yourself in the event of a nuclear holocaust. We didn’t do this at my school; instead, we went into the hall, leaned against a wall, and covered our heads with our hands. When the Russians launched, we would be ready.

In retrospect it seems absurd and almost obscene, but at the time—for a six-year-old—it was normal. It reflected the reality of the world, and that world was defined by politics and political confrontations. 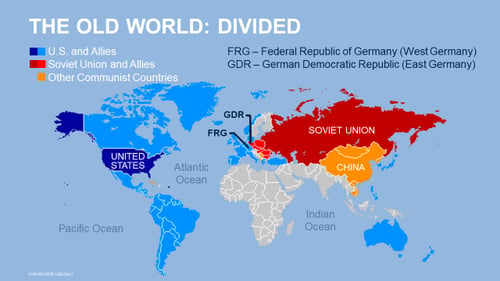 From four worlds to one

Even the maps reflected that reality. Remember the one-world map from my last post? This is a four-world map, which reflects the political—and economic, but we didn’t think about that much then—divisions of the old world. You had the U.S. and its allies and the Soviet Union and its allies. China was off by itself. All were separate worlds in many ways. Note that West Germany (the FRG) and East Germany (the GDR) were also separated, when now they are just Germany.

Almost as interesting is what the map doesn’t show. India and Africa are grayed out, almost as if they don’t matter, and from a political—and economic—perspective, they really didn’t.

When we look at the underlying assumptions, this is clearly a political map. Economics, population, and all the other factors are subsumed into politics—as was the way in the old world.

All that changed, starting in 1979 when China opened up. This added a billion people to the global economy, hundreds of millions of whom were working age. At a stroke, labor became much more available. The change wasn’t immediately apparent, of course, because the overarching political structure—the confrontation between the U.S. and the Soviet Union—persisted. 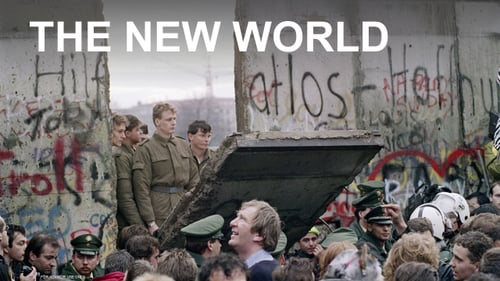 That broke in 1989, when the Berlin Wall came down, and the political gridlock broke as well. Suddenly, the political reality changed, and the new world had to find a new defining principle. With the U.S. the dominant power, and with China open for business, economics came to be that new principle, which brought us to the world we have now.

From politics to economics

That transition, from politics to economics, did not just occur between nations but also within them. In Europe, for example, the creation of the European Coal and Steel Community was followed over the decades by increasing economic integration, to the point where the EU now largely functions as a single economic entity, including—for many countries—a single currency.

Here in the U.S., the transition was just as dramatic. The airline industry, for example, used to be strictly regulated, with airlines restricted as to where and when they could fly. This led to effective monopolies and high prices. Now, of course, regulations are much lower, and so are prices. The financial industry, which used to have minimum commissions and regulated interest rates, now can offer variable pricing that serves a much wider range of customers. The examples go on and on.

The transition from a political world to an economic world really did make things different—and better—for citizens, for consumers, and for countries. It also changed the world for investors. Next week, we will look at just what the new world has meant for us as investors over the past several decades. Spoiler alert: It’s all been good.