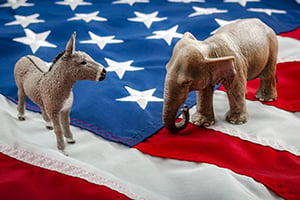 First, a confession. I handled a recent comment on the blog badly. A reader wrote in with a question that I read as a political diatribe, and I dismissed it without taking the question itself seriously. I realized that my response was wrong and have since apologized, publicly, in the comment section of that post. I owe my readers, if I can respond at all, a thoughtful engagement with their issue, and I failed that standard. I will try to do better going forward.

As you may have noticed, both the economy and the markets grew during all of those administrations. Each administration had its own challenges and problems; nonetheless, we as a country continued to move forward. The world didn’t end, and companies continued to find ways to grow and make more money. Life went on.

This is the context I use when I evaluate political issues and questions. As an economist and market analyst, I shy away from politics and focus on the facts. The biggest fact of all is that the administration, no matter which side, has a very limited effect on the national economy and on the financial markets.

If you look at a chart of the economy or of the markets, and cover up the dates, you really can’t pick out when your party was in charge. Similarly, when you look at economic and market performance under various permutations of which party is in charge, there are differences, but they are not consistent over time. For all of the headlines and the fearmongering, politics and governance don’t make a significant difference.

The Strength of the System

How can that be? Simple. Every president and Congress would like to have control—but they don’t. States push back. The Supreme Court pushes back. Municipalities push back. It is rare that something significant actually gets through. And even when it does? The genius of the American system is that companies then set their collective minds on how to avoid it, if they don’t like it, and/or how to make money off it. For example, look at literally any tax bill ever passed.

Fundamentally, that is the strength of the American system. When you say that Washington will derail the economy or the markets, you are saying that it really controls all of the shoppers and the companies, which simply isn’t true. It is certainly in the interest of politicians to exaggerate their power (to motivate their supporters) and to exaggerate their opponents’ powers (again, to motivate their supporters). But the fact of the matter is that the U.S. economy is driven by millions of profit-motivated companies that will find ways to work around or profit from pretty much anything the politicians can do. Thank goodness for that.

Is It Different This Time?

Which doesn’t answer those who maintain that this time is different. That somehow today’s problems are worse than they have ever been before. There is always a constituency for panic. But if you really believe that, if you really believe that Washington—of one party or the other—can derail the country, then what you are saying is that Washington already has full control. That is not what I see when I look around.

What I see is the same vivid debate on policy we have always had and the same back-and-forth that ultimately results in a reasonable solution. Perhaps it is louder now, but it is still the same process.

One of my favorite quotes, from Winston Churchill, notes that you can always count on Americans to do the right thing once they have tried all the alternatives. I would argue that is what is happening now and that despite the short-term damage, which can be real, ultimately we will move ahead again. This too will pass. In another election or two, the politicians you hate/love will be replaced with those you love/hate—and life will continue.