The Bear Is Here 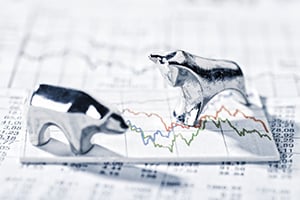 We hit a milestone just recently, although it’s certainly not one we wanted to hit. The S&P 500 stock index is now officially in a bear market, down more than 20 percent from its highs. The Nasdaq, of course, has been in a bear market for some time. It is down more than 20 percent, but that is primarily technology, which is notoriously volatile. The S&P 500, which includes the largest and best-known companies across all industries, is a better indicator of market stress overall. The fact that it has moved into the bear phase signifies significant market and economic stress.

The stress is real, as we can see in the headlines. Inflation is at 40-year highs, gasoline is at unprecedented prices, we have a war in Europe for the first time in 80 years, and that is not all. This is a difficult time. If you think about it, a substantial market reaction makes sense.

Despite the very real risks out there, however, the current bear market is not really about the headlines. Rather, it reflects what is happening in the economy and in economic policy, which is related to—but different from—those headlines. So, to understand what is really happening and where we are likely going, we need to take a step back from the headlines. Let’s do just that.

The current decline, while sharp, is fairly typical in market history. Similar declines often come after periods of sustained large gains, which we have had in recent years. It is normal for the market to give back some gains before resuming growth. We saw similar sharp declines in 2020, 2018, and 2011, not to mention 2008 and 2009—only to see the market recover. Declines are scary, certainly, but they are also normal and even necessary. Historically, they can be sharp but are often short, as we saw in 2020. There are no guarantees, of course. But often the sharper the drop, the quicker the recovery.

What’s Happening in the Economy?

Even if declines set the stage for future growth, that doesn’t answer the question of how we get from here to there. To determine that, we have to look at the economy itself. By understanding what is driving this decline, we can understand how it will end. And that depends on the economy itself.

Right now, the major factor is inflation. While the economy continues to grow, inflation is slowing that growth. This round of price inflation started in the pandemic, with stimulus payments driving more spending, even as supply chains contracted. More recently, however, inflation has shifted to a more permanent—and more threatening—trend, driven by housing and services. That has made it a much higher risk than it appeared even a month or two ago.

On top of that, we have other factors keeping inflation high. The war in Ukraine has driven oil and food prices higher around the world, and that will continue as long as the war does. Higher energy prices affect everything else. In conjunction with everything else, it suggests the inflation risk is much higher than many had thought.

Inflation is something that can sink an economy, especially if it becomes entrenched, as we saw in the 1970s and 1980s. There are now signs that inflation expectations are rising, and that is forcing the Fed to act by raising interest rates more quickly, resulting in higher mortgage and auto loan rates, among other things. This is designed to slow the economy, potentially creating a recession, but also to avert even more severe damage later on.

Despite the good long-term intentions, however, the potential economic damage right now is real, and markets are reflecting that. Beyond slowing the economy and potentially reducing corporate earnings, higher rates directly reduce the prices investors pay for stocks. This is a double whammy that has resulted in the fast market drawdown this year. And that is how we got to today: high inflation has caused high interest rates that have slowed the economy and taken stock valuations down.

What does this all mean for the future? The good news is that the Fed is publicly committed to stopping inflation. That will reassure markets and possibly reduce how high interest rates need to go. The bad news is that this will still require higher interest rates—and that is what we need to watch for. Interest rates are the key to both economic growth and stock market performance.

Of course, there are lots of interest rates, but the critical rate that helps determine stock valuations is the yield on the 10-year U.S. Treasury note. That rate spiked in recent days, driving the most recent drawdown in the stock market. Here, we do have some good news. While short-term interest rates are likely to keep rising, as the Fed tightens policy, longer-term rates don’t necessarily follow suit. As growth slows, the likelihood of a recession in that 10-year period rises, and rates can fall. As such, while the Fed is raising rates (and that has hit the markets), once the market sees those rate hikes ending, the 10-year rate will start to drop, and that will likely mark the start of the stock market recovery.

This is a scary time. When investors look at their statements, perhaps their risk tolerance is less than they thought. That’s okay, but investors who are concerned about their portfolios should talk with their advisors, who can help them understand why they own what they do. Because investing is a long-term project. In the long term, we have seen bear markets before—and recovered nicely.