On the Brink? How to Monitor Business Confidence for Recession Risk 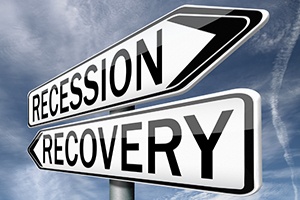 Yesterday, I talked about what I am keeping an eye on, business and consumer confidence, and why I think they are important. Today and tomorrow, I want to talk about how I plan to do that.

Business confidence is leading the headlines right now. With the trade war and the general economic slowdown around the world, U.S. business is reported to be suffering. That seems to be true, but is that suffering bad enough to affect the economy as a whole?

One way to answer this question is to look at the overall confidence level of businesses, as surveyed by the Institute for Supply Management, or ISM. The ISM measures business confidence using a diffusion index, where values above 50 indicate expansion and values below 50 indicate contraction. There are two different data series, one for manufacturing businesses and one for nonmanufacturing (service) businesses. These two series often act differently, as we saw yesterday. Both can give valuable information.

Manufacturing. The manufacturing survey is shown in the below chart. While 50 is the dividing line between expansion and contraction, you can see that a decline into contraction territory has usually not, in fact, been an indicator of recession. Instead, the threshold for a recession looks to be around 45. I will, therefore, be watching for this survey to drop to that level before I start to view it as a recession indicator. 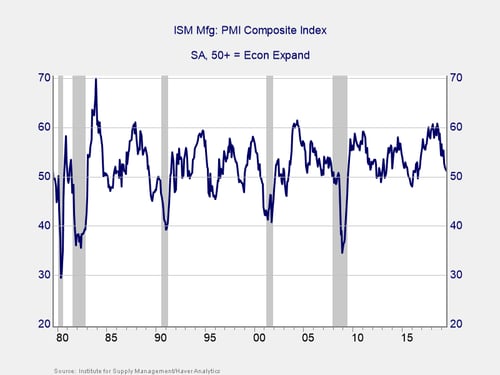 This makes sense for two reasons. First, manufacturing is a relatively small part of the economy, at about one-eighth. If manufacturing is down but the service sector (which I discuss below) remains positive, the economy is likely to keep expanding. Second, manufacturing is simply more volatile, bouncing up and down more than the economy overall. As such, it can—and has—bounced above and below the dividing line simply due to volatile data rather than a systemic recession risk. Both suggest that the risk threshold should be below 50, which is just what we see. The exception here is, of course, 2008, but that was primarily a financial phenomenon, rather than an economic one. As such, it is an outlier—something to be watched but not relied on as a general indicator.

Right now, the manufacturing confidence level is at 51.2, which is still expansionary—despite what the headlines say—and still well above the threshold of 45. Based on this, confidence remains outside the risk zone.

Nonmanufacturing, or service. The reverse, however, is true for the service sector. This is also a diffusion index, but here we can see that recessions have typically started when the index hits 50. In fact, 52 appears to be the threshold at which risks rise dramatically. 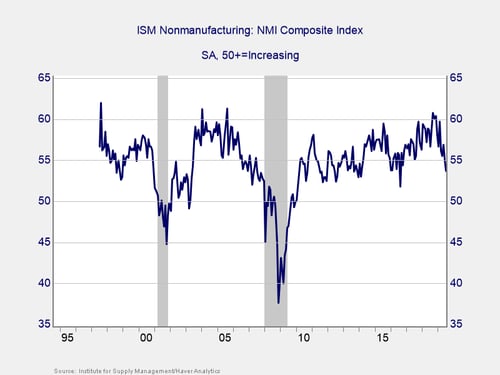 This also makes sense. The service sector is less volatile than the overall economy, as many components are not discretionary and, therefore, less affected by trends. Also, as the primary component of the economy, at about seven-eighths, when the service sector does move below 50, the economy will follow into recession immediately. Because of this, I will start worrying about this when this indicator drops below 52.

Right now, this index is at 53.7, which is both expansionary and above the risk zone—but it is getting close. The last time the value was this low was in August 2016, when it did break 52. This is, therefore, something that bears watching, but, again, it’s not an immediate worry.

Watching for the trouble point

A more detailed look at business confidence, which we have taken here, shows that while the trends are negative, we are not yet at a trouble point. The takeaway is that we know where that trouble point is—and can watch for it effectively. Tomorrow, we will take a deeper look at consumer confidence along the same lines.