No News Is Good News for the Economy

Reading the papers this morning, I realized we’d hit a milestone: there were no articles about the economy on the front pages of either the New York Times or the Wall Street Journal.

I can’t remember the last time that happened since the financial crisis. Nothing about weak numbers, or expected doom, or anything on the economy at all. We’re back to politics, foreign affairs, the Masters, and a business deal or two.

This remarkable fact speaks to a point I made in Friday’s post: that we’re well into a sustainable recovery. Given the general “if it bleeds, it leads” attitude of the press, the absence of any economic articles is significant.

Not much to worry about

I don’t want to make too much of this, and one day certainly isn't prescriptive, but the fact of the matter is that the U.S. economy is giving us relatively few obvious issues to worry about. Not none—I regularly highlight things I worry about—but we’re in a pretty good place right now.

Let’s take another look at a chart from Friday’s post: 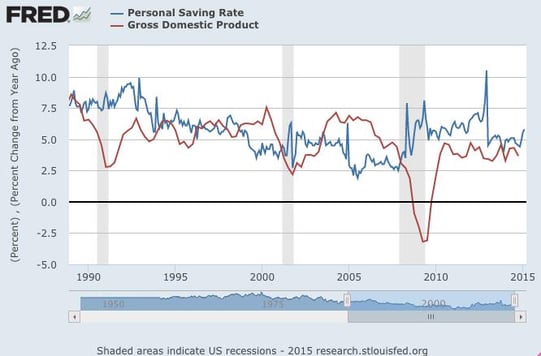 In the 1990s, savings stayed consistently above growth, until the bubble at the end of the decade. In the 2000s, savings sagged below growth quite early on, which led to a much bigger bubble, in housing, and a much bigger crisis. Right now, savings are again outpacing growth, as they should.

Based on this metric, we’re still in good shape. The other major economic indicators I track monthly also support this conclusion.

Why should savings matter?

They matter because savings has to equal investment in the economy as a whole. This isn’t politics; it’s math. Without savings, we can’t invest enough to grow the economy. 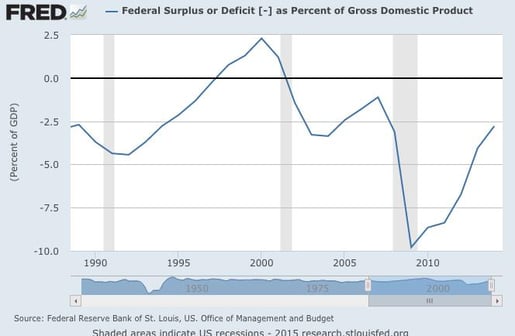 At this point, it’s appropriate to look over our shoulder at the government. Savings doesn’t just refer to the consumer, it also applies to the government—the biggest dissaver, in the form of deficits. Again, it’s instructive to compare the 1990s with the 2000s and the present.

In the early to mid-1990s, the deficit was around 2 percent to 4 percent of GDP, before moving up to surplus. In the 2000s, the deficit stayed lower for longer than in the 1990s. Now, after having a much larger deficit, we’ve moved back to the levels of the mid-1990s or mid-2000s. Personal savings growth is helping just as much as it did at those times, which is important.

Another way to look at the matter is to consider total debt levels, per the following chart: 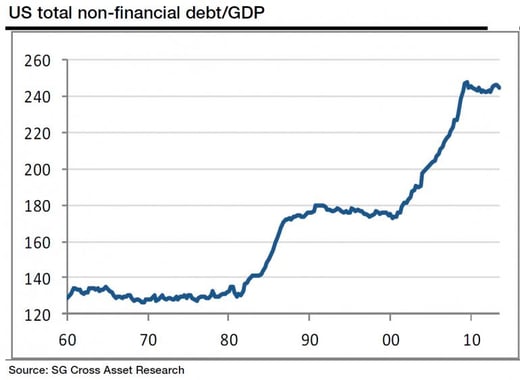 Many have commented on how slow the recovery has been, with the underlying assumption that it should have been much faster—and would have been, if only the commentator’s preferred policies had been implemented.

I don’t believe that’s the case. I think the remarkable thing is how strong the recovery has been in the face of all the headwinds. Just as we saw slow growth in the early 2010s despite everything, the overall level of growth last year, despite worries elsewhere in the world, shows that the U.S. economy is in good shape. The current numbers indicate that its health is continuing, and that it’s likely to improve.