U.S. equity markets pulled back in September after reaching new highs in August. The pullback was largely due to rising political uncertainty and increased investor concerns about inflation and interest rates. The S&P 500 declined by 4.65 percent during the month, the Dow Jones Industrial Average fell by 4.20 percent, and the Nasdaq Composite lost 5.27 percent. September’s volatility served as a reminder that markets face numerous risks that should be monitored.

Recessions are strongly associated with market drawdowns. In fact, 8 out of 10 bear markets have occurred during recessions. The National Bureau of Economic Research declared that a recession started last February when markets plunged, but recently announced that it ended shortly thereafter. Despite that and the ongoing expansion, economic risks still remain. The primary risk is a slowing recovery, as evidenced by a slowdown in job growth, as well as a drop in consumer confidence in September.

On the whole, the economic recovery continues. But given these risks, we have kept the economic risk level at a yellow light for now. Although the most likely path forward is continued recovery, the slowdown in economic activity in September signals that risks are rising on the economic front. 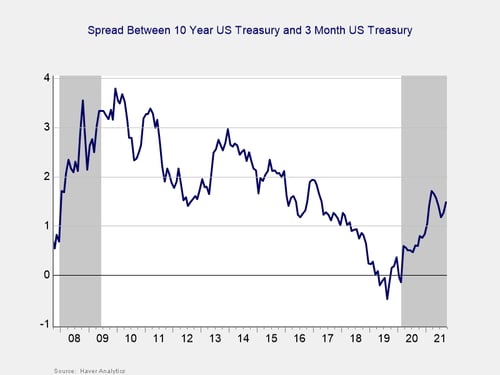 The yield curve steepened in September for the second month in a row. This result was primarily due to rising long-term interest rates as the 10-year Treasury yield increased from 1.30 percent at the end of August to 1.52 percent at the end of September. The three-month Treasury yield remained unchanged at 0.04 percent at the end of September. While short-term rates are expected to remain low until at least 2023, longer-term rates rose during the month, partially in response to the Fed’s September meeting where the central bank indicated it may start tapering asset purchases by the end of the year. The increase brought long-term yields closer to pre-pandemic levels and the recent highs that we saw in March and April of this year.

While the rise in long-term yields during the month is a sign of a return to more historically normal yield levels, the rising yields do pose a threat for equity valuations, as we saw in September (and earlier in the year when rising long-term yields contributed to equity market volatility).

Given the fact that long-term yields are approaching the 2021 highs from March and April, we have downgraded this indicator to a yellow light. 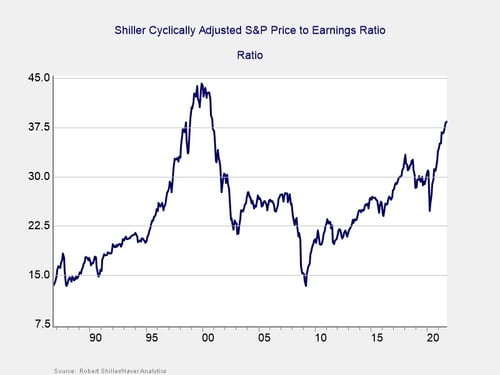 Valuations continued to rise in September, as the CAPE Shiller ratio rose from 38.09 in August to 38.34 in September. This marks four consecutive months with rising equity market valuations, and it left the Shiller CAPE ratio at its highest level since late 2000.

Even though the Shiller P/E ratio is a good risk indicator, it is a terrible timing indicator. To get a better sense of immediate risk, we can turn to the 10-month change in valuations. Looking at changes rather than absolute levels gives a sense of the immediate risk level, as turning points often coincide with changes in market trends. 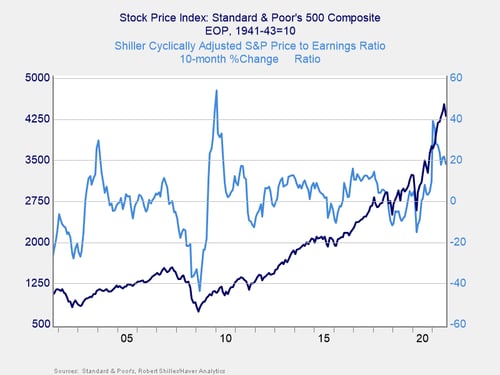 Here, you can see that when valuations roll over—with the change dropping below zero over a 10-month or 200-day period—the market itself typically drops shortly thereafter. This relationship was held at the start of the pandemic, as valuations and the index both rolled over before rebounding. On a 10-month basis, valuations rose by 18.1 percent in September, down from the 21.8 percent increase we saw in August. Given the historically high valuation levels, we have kept this indicator as a yellow light for now, despite the fact that valuation changes have remained outside of the danger zone since May 2020. 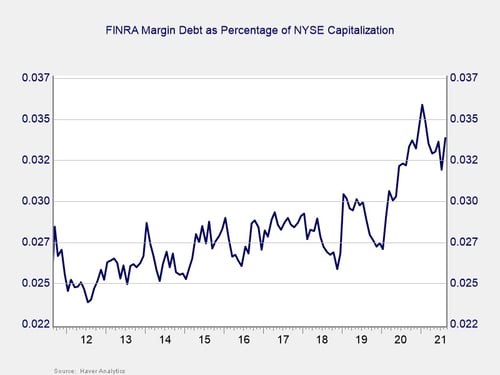 Debt levels as a percentage of market capitalization increased notably at the start of the pandemic and throughout 2020. Since then, we have seen margin debt as a percentage of market capitalization largely decline after hitting a record high in January 2021. Margin debt increased in August, and the overall level of margin debt remains high on a historical basis. The high level of debt associated with the market is a risk factor on its own but not necessarily an immediate one. 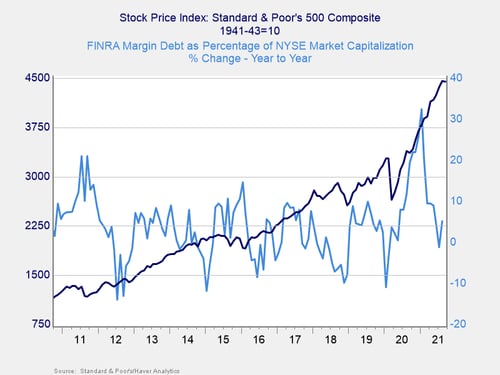 As you can see in the chart above, margin debt as a percentage of market capitalization increased by 5.2 percent in August, following a 1.2 percent decline in July. Despite this increase, the year-over-year growth rate remains well below the recent high of 32.5 percent we saw in January.

While the year-over-year growth figure remains below the recent highs from earlier in the year, the increasing margin debt as a percentage of market capitalization in August is worth monitoring given the historically high level of margin debt. We have kept this indicator at a yellow light for now.

Risk factor #3: Technical factors. A good way to track overall market trends is to review the current level versus recent performance. Two metrics we follow are the 200-day and 400-day moving averages. We start to pay attention when a market breaks through its 200-day average, and a break through the 400-day average often signals further trouble ahead.

Technical factors remained supportive for equity markets throughout September. The S&P 500, which managed to break above its 200-day moving average at the end of May 2020, has finished above trend every month since. The Dow Jones Industrial Average and Nasdaq Composite have seen similar technical support. This marks 15 consecutive months with all three major U.S. indices finishing above trend.

The 200-day trend line is an important technical signal that is widely followed by market participants, as prolonged breaks above or below could indicate a longer-term shift in investor sentiment for an index. The 400-day trend line is also a reliable indicator of a change in trend. The continued technical support for markets despite the volatility during the month was encouraging, so we have left this signal at a green light. 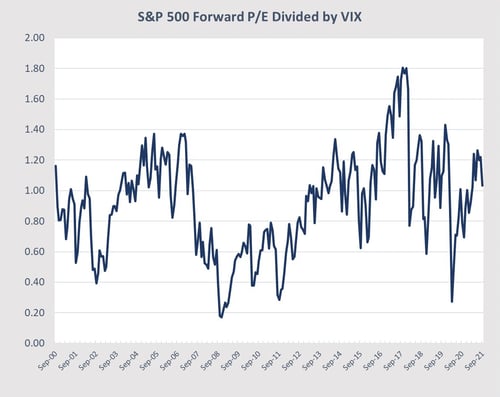 Looking at the current chart, market complacency declined in September. The average VIX reading for the month increased from 17.5 in August to 19.8 in September. The forward-looking P/E ratio for the S&P 500, on the other hand, declined during the month, falling from 21.3 to 20.5. The combination of higher volatility and lower forward-looking valuations caused the market complacency index to decline from 1.22 in August to 1.03 in September. This brought the index to its lowest level since March and signals rising investor concern and, therefore, lower complacency.

Readings above 1.2 have historically been a signal that market complacency is at potentially concerning levels; the fact that the index fell well below this level following three months with readings at or above 1.2 was an encouraging development. We have upgraded this indicator to green due to the drop in complacency during the month.

Economic fundamentals showed slowing growth in September for the second month in a row. We saw consumer confidence decline and the pace of hiring slow during the month, which is a bad sign for future spending growth. It should be noted that while the pace of the economic recovery slowed, the reports did show continued growth—just at a slower pace compared to the spring and summer.

Markets were rattled during the month by increased investor concern about political uncertainty, rising interest rates, and the fear of persistent inflation. Markets have failed to rebound to recent highs through the start of October, and it’s quite possible we will see additional volatility in the months ahead—especially if we continue to see slowing economic growth. With that being said, a continued economic recovery remains the most likely path forward.

Ultimately, the path back to a more normal economic environment is likely going to be long, and we can expect setbacks along the way (as we saw in September). Given that the indicators we track in this piece remained at a yellow light or better during the month, we have left the overall market risk level at a yellow light for now, although the recent economic slowdown could lead to further volatility and downgrades in the months ahead.