My colleague Sam Millette, senior investment research analyst on Commonwealth’s Investment Management and Research team, is a key player in preparing the monthly Economic and Market Risk Updates. Thanks for the expertise, Sam!

September was a challenging month. Markets dropped notably at the start before partially recovering throughout the rest of the month. The S&P 500 declined by 3.80 percent, the Dow Jones Industrial Average fell 2.18 percent, while the Nasdaq Composite suffered a 5.10 percent drop. This volatility highlighted the very real risks to markets that remain.

Recessions are strongly associated with market drawdowns. Indeed, 8 of 10 bear markets have occurred during a recession. As we discussed in this month’s Economic Risk Factor Update, the National Bureau of Economic Research (NBER) declared that a recession started in February. On top of that, most of the major economic indicators we cover monthly remain at a red light, despite continued economic recovery during the month. As such, we have kept the economic factors at a red light for October.

Please note: We have removed the oil price chart from this piece. With the transition to what looks like a sustained low-price regime and the much lower energy sensitivity of modern economies, we concluded it was likely to be a less useful indicator going forward.

One major systemic factor is the price of money, better known as interest rates. This is a systemic factor that drives the economy and financial markets and has historically had the ability to derail them. Rates have been causal factors in previous bear markets and deserve close attention. 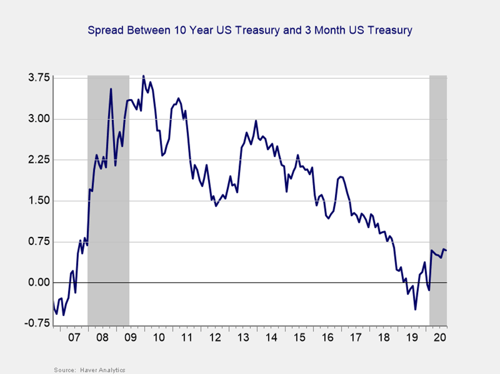 The yield curve started the year inverted, and it un-inverted in March, where it has remained throughout the pandemic. This un-inversion was driven by a sharp drop in short-term rates, which was caused by the Fed’s decision to cut the federal funds rate to effectively 0 percent in March. The yield of the 3-month Treasury fell modestly in September, from 0.12 percent at the start of the month to 0.10 percent at month-end. The 10-year yield also fell modestly—from 0.72 percent to 0.69 percent.

Although an inversion is a good signal of a pending recession, it’s when the gap subsequently approaches 75 bps or more that a recession is likely. We finished September with a spread of 59 bps, and the NBER declared a recession started in February. In light of that, and with the spread remaining near the critical level, we are leaving this indicator at a red light. 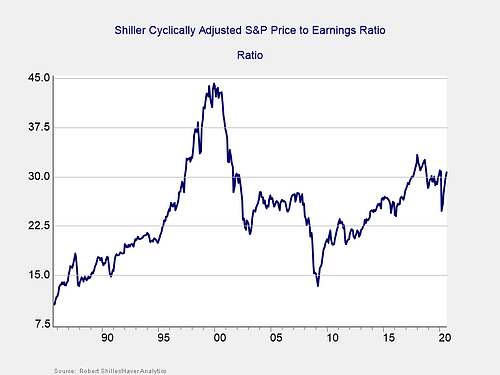 Please note: Due to data limitations, the Shiller P/E data is the same data from last month’s update.

Valuations increased for the fifth month in a row in August, from 29.6 in July to 30.6 in August. This follows a steep drop to a three-year low of 24.8 in March, at the height of the recent pandemic-driven volatility. Despite the fact that valuations remain below recent highs, risks still remain given the relatively high valuation from a historical perspective. 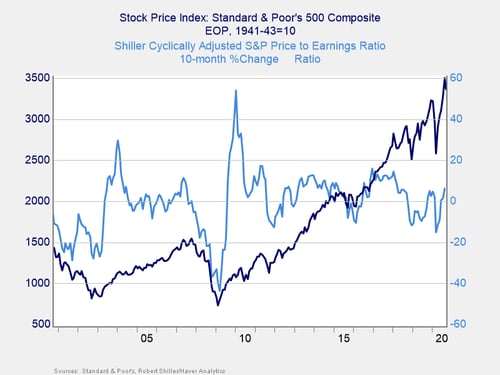 Here, you can see that when valuations roll over, with the change dropping below zero over a 10-month or 200-day period, the market itself typically drops shortly thereafter. This relationship held in March, as valuations and the index both rolled over before rebounding. On a 10-month basis, valuations rose by 6.2 percent in August, which was the largest increase since 2018. Given the increase in valuations during the month and the historically high valuation levels, we have kept this indicator as a yellow light for now. 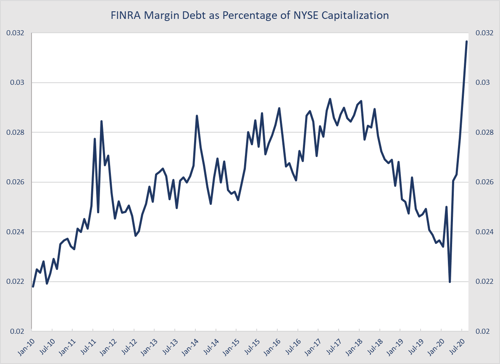 Debt levels as a percentage of market capitalization had dropped substantially over the past two years before spiking in February to a then six-month high. March saw this measure of market debt fall to levels last seen in 2010, as investors de-risked, before rebounding notably along with the market. With the rebound, margin debt set a record high in July before August’s surge pushed debt levels even higher. 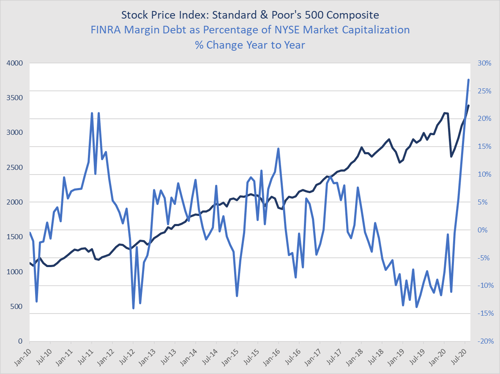 As you can see in the chart above, the annual change in debt as a percentage of market capitalization increased in February, before falling steeply in March and increasing sharply in May through August. 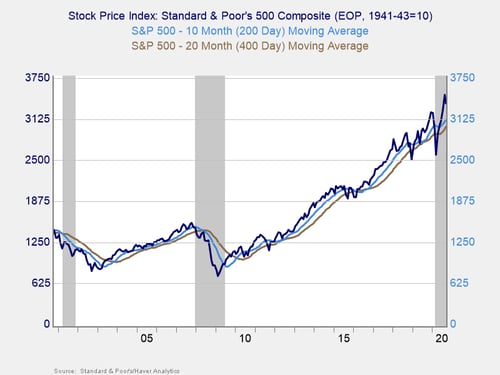 Technical factors remained supportive for equity markets in September despite the volatility during the month. The S&P 500, which managed to break above its 200-day moving average at the end of May, finished above trend for the fifth month in a row after spending the entire third quarter above trend. This marks three straight months with all three major indices finishing above trend.

The 200-day trend line is an important technical signal widely followed by market participants, as prolonged breaks above or below this trend line could indicate a longer-term shift in investor sentiment for an index. The 400-day trend line is also a reliable indicator of a change in trend. The continued technical support for markets in September was encouraging, so we have left this signal at a green light for the month.

Risk factor #4: Market complacency. This is a newly added risk factor that aims to capture a standardized measure of market complacency across time. Complacency can be an uncertain term, so this chart aims to identify and combine two of the common ways to measure complacency: valuations and volatility.

By combining the two metrics in the chart below, we see periods where high valuations and low volatility have caused peaks, such as 2000, 2006–2007, and 2017. We saw market drawdowns roughly within a year following each of these peaks. 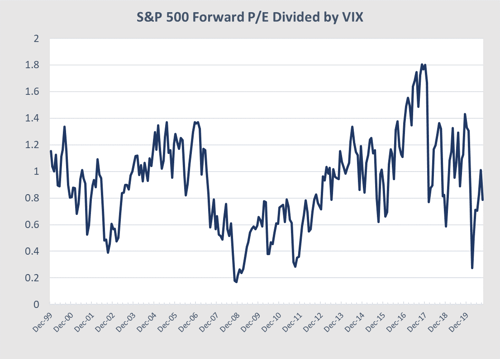 Looking at the current market, it appears as if complacency is not that high right now. While valuations have rebounded, there has been enough volatility to cause the VIX to rise and take the overall index lower. September’s volatility caused valuations to decline modestly while the VIX rose, bringing the index to its lowest level since June. The index’s current level of 0.79 is well below the 1.2 level that has historically shown high levels of complacency in the market.

We are starting this indicator at a green light given the fact that the market appears to be less complacent than headlines might otherwise suggest.

Economic fundamentals showed continued growth in September, albeit at a slower rate than earlier in the summer when reopening efforts and government stimulus provided a tailwind. But markets took a step back, breaking a five-month positive streak for the S&P 500. With signs toward month-end that health risks appear to be rising, the country is far from out of the woods in terms of containing the virus or fully normalizing the economy, which is what markets are pricing in—leaving them exposed to any setbacks.

Risks to the current market outlook remain, whether in the form of rising case counts or political factors such as the upcoming election or rising international risks. Given the multiple red light indicators, rising risks could easily result in more volatility.

As such, and despite signs of improvement, we are keeping the overall market risk indicator at a red light. This is not a sign that markets are necessarily headed back to the lows. Instead, it is a recognition that the road back to normal is likely going to be long, with the potential for setbacks that could lead to additional market pullbacks. Given the uncertainty created by the pandemic and the likelihood for further volatility, investors should remain cautious on equity markets.