It’s time for our monthly look at market risk factors. Just as with the economy, there are several key factors that matter for the market in determining both the risk level and the immediacy of the risk. Although stocks are near all-time highs, the volatility at the beginning of October is a reminder that, given valuations and recent market behavior, it is useful to keep an eye on these factors.

Recessions are strongly associated with market drawdowns. Indeed, 8 of 10 bear markets have occurred during recessions. As we discussed in this month’s Economic Risk Factor Update, right now the conditions that historically have signaled a potential recession are not in place. There are, however, signs that the risk is growing, with consumer and nonmanufacturer confidence weakening on a year-over-year basis. On an absolute basis, most of the major signals are not yet in a high-risk zone. But trends are becoming more negative, and four of the signals are now at yellow with some signs of red. As such, we have kept economic factors at a yellow light for November.

A quick price spike like we saw in both 2017 and 2018 is not necessarily an indicator of trouble, especially as the subsequent declines took this indicator well out of the trouble zone. There is no sign that the September drone attack on Saudi Arabian oil production facilities led to sustained higher gas prices. Prices sit well below 2018 highs. Therefore, this indicator remains at a green light. 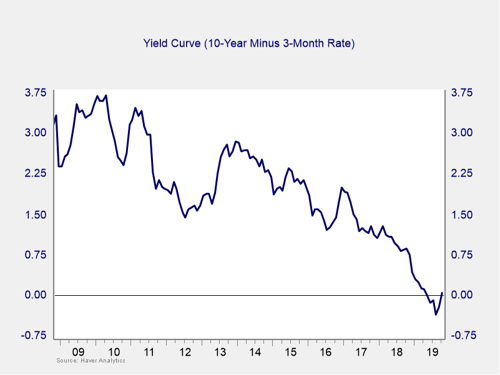 The yield curve un-inverted in October, as yields fell on the short end of the curve. Declining short-term rates were primarily driven by the Fed’s decision to cut the federal funds rate at its October meeting by 25 bps. This marks the third straight meeting where the Fed has cut interest rates, as Fed officials try to support the ongoing economic expansion.

Although the return to normalcy between the 10-year and 3-month Treasury rate was a positive development, there is still a real chance of another inversion if long-term rates fall. If 10-year Treasury yields return to their August lows without a similar move in short-term rates, we would find ourselves inverted again. In addition, historically, the end of an inversion has not eliminated the risk of a recession. Given that, and the potential for further inversions in the short term, we are keeping this measure as a yellow light this month. 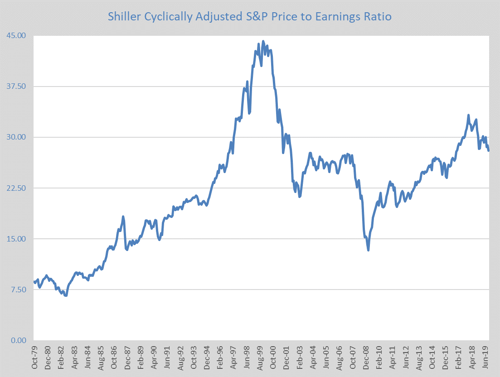 The major takeaway from this chart is that despite the recent decline, valuations remain extremely high. They are still above the levels of the mid-2000s, although down from recent highs. Despite the drop, stocks remain quite expensive based on history. High valuations are associated with higher market risk—and longer-term metrics have more predictive power. So, this is definitely a sign of high risk levels. 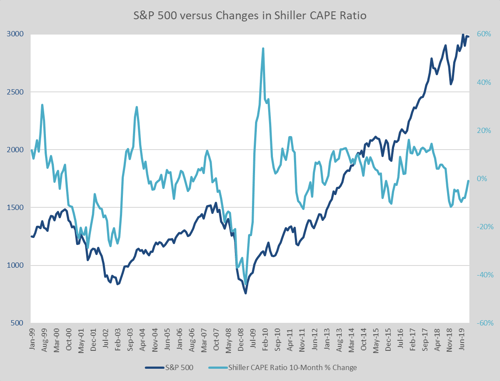 Here, you can see that when valuations roll over, with the change dropping below zero over a 10-month or 200-day period, the market itself typically drops shortly thereafter. After the decline at the end of last year took the market into the risk zone, recovery through this year took us back close to even. October was another solid month for equities, marking two straight positive months following August’s volatility. We are keeping this indicator at yellow due to the fact that we remain above the levels of 2011 and 2015–2016. 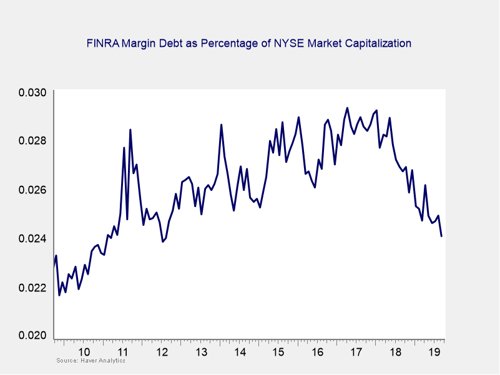 For immediate risk, changes in margin debt over a longer period are a better indicator than the level of that debt. Consistent with this, if we look at the change over time, spikes in debt levels typically precede a drawdown. The most recent uptick in margin debt as a percentage of market capitalization still leaves this ratio well below highs seen in 2017 and 2018. 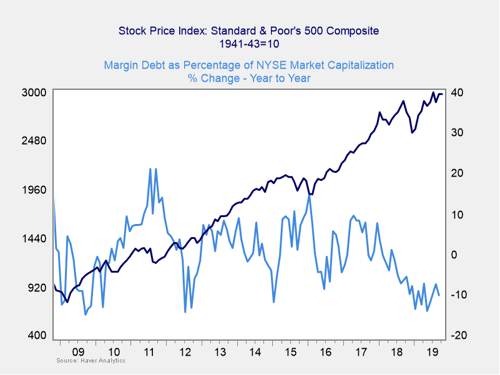 As you can see in the chart above, the annual change in debt as a percentage of market capitalization remains well below zero, and it seems to be on a general downward trend despite August’s uptick. This indicator is not signaling immediate risk at this point but has been volatile in recent months. Given that, and the fact that the overall debt level remains very high, it is worth watching. So, we are keeping this indicator at a yellow light. 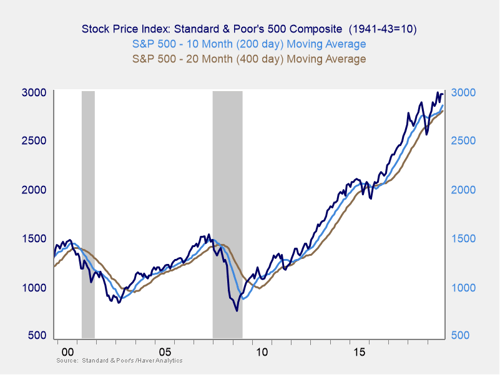 Last year’s declines took all three major U.S. indices below the 400-day trend lines, a significant support level. The subsequent recovery brought them back above both that level and the 200-day level. But in May, we had a brief break back below the 200-day trend line, followed by a recovery, and then another brief break below in June. Following declines in August, September’s positive results helped calm fears of a pullback below the trend line. October was also a positive month for equities, despite some volatility early in the month. The probability that the markets continue to rebound is still the base case. But as we saw in October, volatility can strike at any time. So, we are leaving this indicator at yellow.

Market risks have been at the yellow light level for the past 20 months and recently dropped even further with the hint of some red lights. But market conditions have largely improved over the past couple of months, despite turbulence at the beginning of October. On the other hand, economic risks have risen as the incoming data remains weak, and there have been a couple of potentially significant breakdowns. On balance, this leaves us solidly in the yellow zone of increased risks.

The market recovery following August’s volatility is encouraging, and the overall economic environment remains supportive. Although neither of the likely shock factors is necessarily indicating immediate risk, the rising signs of economic weakness, combined with the fact that several of the market indicators continue to point to an elevated level of risk, suggest that recent volatility may continue. The recovery to start the month is encouraging, but as we saw last month, outside factors can swiftly affect markets.