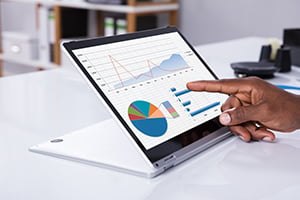 Markets sold off in early and mid May due to concerns of slowing economic growth before a late-month rally brought them close to even. The month-end rally led to mixed results for the three major U.S. equity indices. The S&P 500 gained 0.18 percent while the Dow Jones Industrial Average managed to notch a 0.33 percent return. The Nasdaq Composite was unable to rebound to positive territory by the end of the month, with the technology-heavy index down 1.93 percent in May. The market turbulence during the month was a reminder that risks remain for markets, and they should be closely monitored.

Recessions are strongly associated with market drawdowns, and 8 of 10 bear markets have occurred during recessions. The National Bureau of Economic Research, which declared that a recession started in February 2020 when markets plunged, announced that it ended shortly thereafter. Despite that, and the ongoing expansion since then, economic risks remain.

On the whole, the economic recovery continued in May, although uncertainty about the path of the recovery remains. The primary risk is a deeper slowdown in growth and tighter monetary policy from the Fed. Given the uncertainty surrounding inflation and the war news, we have kept the economic risk level at a yellow light for now. Although the most likely path forward is continued economic growth, the lowered confidence is a reminder that the recovery pace is uncertain, and we will likely see setbacks along the way. 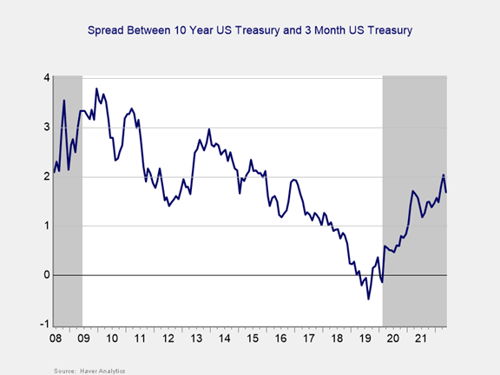 The rise in short-term yields was primarily due to tighter monetary policy from the Fed and high levels of consumer and producer inflation. The Fed hiked the federal funds rate by 75 bps so far this year, and economists expect to see the Fed focused on combating inflation in 2022. This could lead to larger and more frequent rate hikes as the central bank tries to normalize monetary policy.

While this normalization process is a good sign for the ongoing economic recovery and could help tamp down high levels of inflationary pressure, rising rates can have a negative effect on stocks, as we’ve seen so far this year. Given the negative impact of rising rates on equity valuations, we have left this indicator at a red light for now. 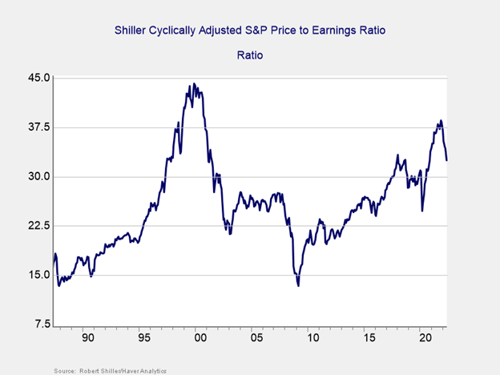 Please note: Due to data limitations, the valuations charts are the same as last month’s update.

Valuations declined in May, marking six consecutive months with declining valuations. The Shiller CAPE ratio dropped from 34.34 in April to 32.51 in May. This result left the index well below the recent high of 38.58 we saw in November of last year.

Even though the Shiller CAPE ratio is a good risk indicator, it is a terrible timing indicator. To get a better sense of immediate risk, let’s turn to the 10-month change in valuations. Looking at changes rather than absolute levels gives a sense of the immediate risk level because turning points often coincide with changes in market trends. 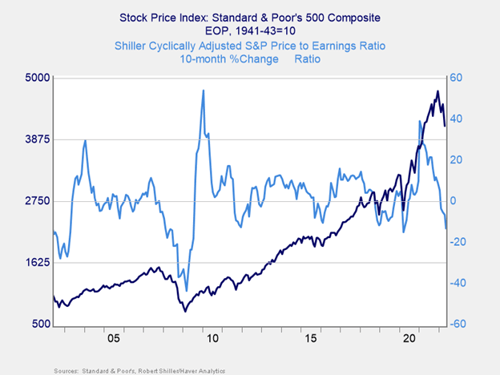 Above, you can see that when valuations roll over—with the change dropping below zero over a 10-month or 200-day period—the market itself typically drops shortly thereafter. This relationship held at the start of the pandemic, and we’ve seen that play out again this year. On a 10-month basis, valuations declined 13.2 percent during the month, following a 6.4 percent decline in April. This now marks four consecutive months with declining 10-month valuations. Given the continued decline in valuations this year and the historically high valuation levels, we have kept this indicator at a red light for now. 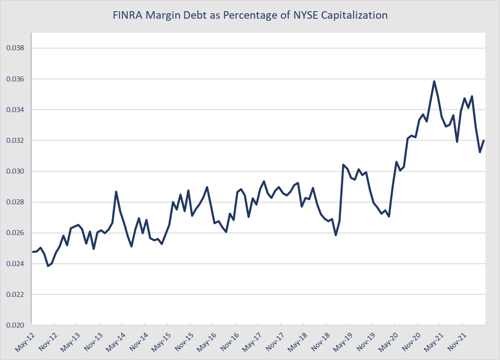 Despite the recent declines in margin debt, the overall level of margin debt remains high on a historical basis. The high level of debt associated with the market is a risk factor on its own but not necessarily an immediate one. 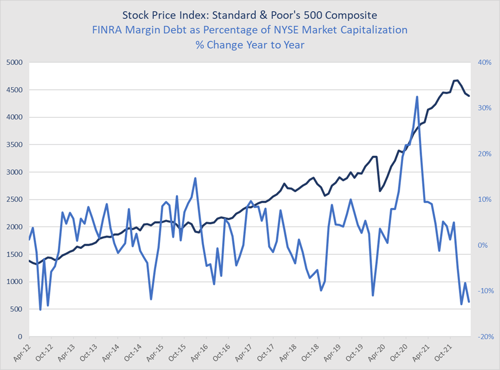 As you can see in the chart above, margin debt as a percentage of market capitalization declined by 13.1 percent on a year-over-year basis in April, following an 11.5 percent drop in March. This now marks five consecutive months with declining year-over-year margin debt.

Although margin debt as a percentage of market capitalization declined on a year-over-year basis in April, the high absolute level of margin debt is worth monitoring. We have kept this indicator at a yellow light for now, but we may see upgrades in the months ahead if margin debt declines on both an absolute and relative basis. 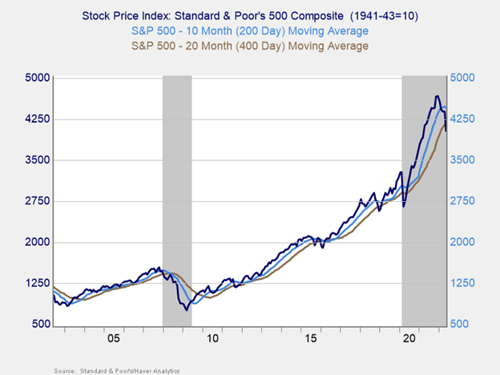 Technical factors for major U.S. equity markets were negative in May. All three major U.S. indices ended the month below their respective 200-day moving averages. This marks two consecutive months with all three major indices ending the period below trend.

The 200-day trend line is an important technical signal that is widely followed by investors, as prolonged breaks above or below this level could indicate a longer-term shift in investor sentiment for an index. The 400-day trend line is also a reliable indicator of a change in trend, and the S&P 500 ended the month below this trendline as well. While it’s too soon to say that investors have turned negative on U.S. equities based on technicals alone, the continued weakness in May is a concern. Therefore, we have kept this signal at a red light for now. 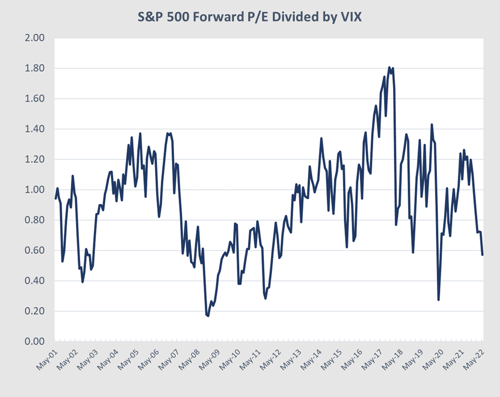 Readings exceeding 1.2 have historically been a signal that market complacency may be at concerning levels. The result for the index in May is a sign that complacency remained outside of the potential danger zone we hit in October 2021. Given the lowered complacency in May, we have left this signal at a green light.

The continued market turbulence in May was another reminder that markets currently face real risks that should be acknowledged and monitored. Inflation and interest rates will continue to drive uncertainty for investors in the months ahead and could cause future short-term declines. The continued geopolitical risks from the Russian invasion of Ukraine and the lockdown measures in China also add uncertainty for markets.

That said, it is possible that we will see risks start to diminish and markets start to rebound in the months ahead. At this point, the risks remain high, and markets may see further losses before a rebound as we’ve seen with the continued sell-off in June.