Market risks come in three flavors—recession risk, economic shock risk, and risks within the market itself. Using a red light/yellow light/green light system, this monthly post explores the risk level in the markets, based on a number of factors.

Recessions are strongly associated with market drawdowns. Eight of ten bear markets have occurred during recessions. As I wrote in yesterday’s economic risk factor update, the conditions that historically have signaled a potential recession are not in place right now. So, economic factors remain at a green light.

There are two major systemic factors—the price of oil and the price of money (better known as interest rates)—that drive the economy and the financial markets and that have a proven ability to derail them. Both have been causal factors in previous bear markets and warrant close attention.

The price of oil. Oil prices typically cause disruption when they spike, with increases above 80 percent being particularly dangerous. Spiking oil prices are a warning sign of both a recession and a bear market. 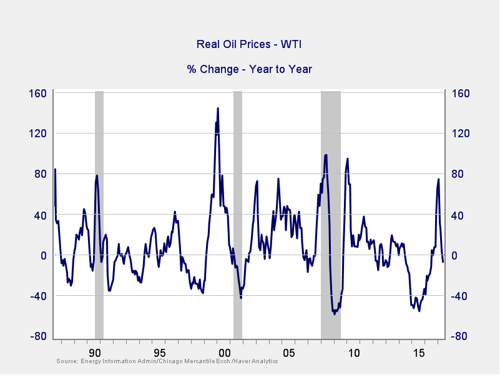 Although there was a spike in oil prices recently, it occurred from low levels, and prices have since decreased, pulling the annual change down. At this point, this signal is not a risk factor, and this indicator remains a green light.

The price of money. I cover interest rate risk in the economic update, but it warrants a look here as well. 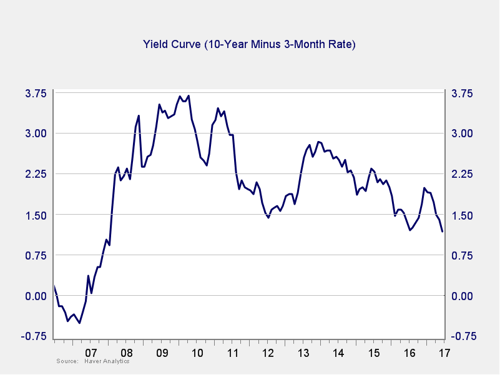 The yield curve flattened further in June. This was driven by lower inflation data that depressed the intermediate and long portions of the curve, as well as the Fed’s decision to raise short-term rates in mid-June, which was widely seen as validation of the strength of the economy. At the same time, though, the Fed's move resulted in a yield curve the likes of which we haven't seen since early 2008.

The spread between the 10-year and 3-month rates remains well outside of the risk zone, but the fact that it is now at post-crisis lows suggests that caution is warranted. I am leaving this measure at green for now, but I will be keeping an eye on it given the downward trend. 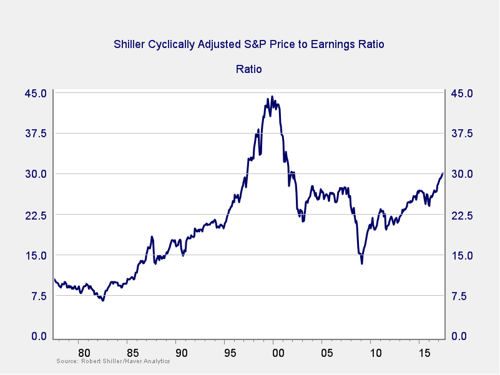 This chart is interesting for a few reasons. Since the presidential election in November, we can see that equity valuations have increased to levels we last saw in the early 2000s. In addition, more recent gains have pushed valuations even higher, to the third-highest level of all time—below only 1929 and, as you can see from the chart, 1999.

Although valuations are at the highest level since 1999, they remain below that peak, so you might argue that this metric does not suggest immediate risk. Of course, this argument assumes we might be headed back to 2000 bubble conditions, which isn’t exactly reassuring.

As good as the Shiller P/E ratio is as a risk indicator, it’s a terrible timing indicator. To get a better idea of timing, we can look at changes in valuation levels over time instead of at absolute levels. 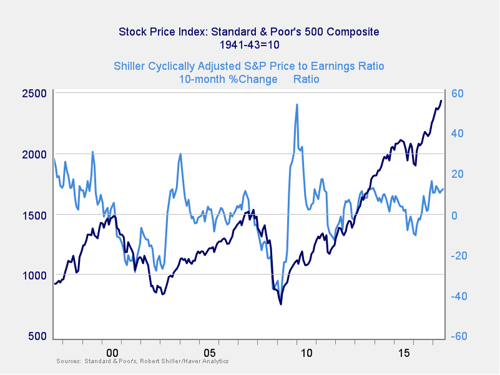 Here, you can see that when valuations roll over, with the change dropping below zero over a 10-month or 200-day period, the market itself typically drops shortly thereafter. The rally since the election has kept changes in valuations at a healthy positive level, although the level of increase seems to be moderating. We're well above the trouble zone here, though, so this indicator shows low immediate risk. 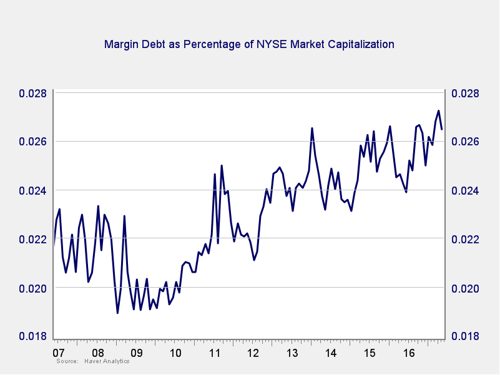 Debt levels as a percentage of market capitalization decreased slightly from last month’s all-time highs. While this decrease is encouraging, the overall high levels of debt are concerning, though, as noted above, high risk does not always mean immediate risk.

For immediate risk, changes in margin debt are a better indicator than the overall level of that debt. Consistent with this, if we look at the change over time, spikes in debt levels typically precede a drawdown. 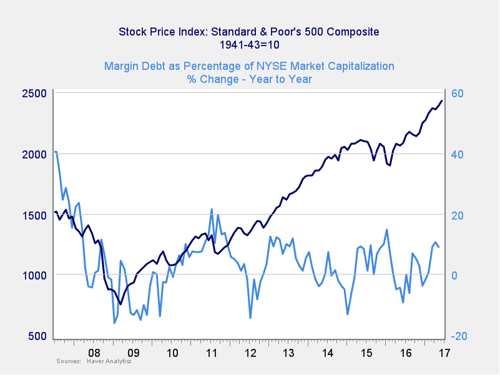 As you can see in this chart, the change in debt as a percentage of market capitalization also decreased slightly during the month. The overall debt level, however, is much closer to the risk zone than it has been, and the risk is increasing. Combined with the high absolute level of margin debt, therefore, the risk level is close to immediate levels. So, this signal remains a concern. 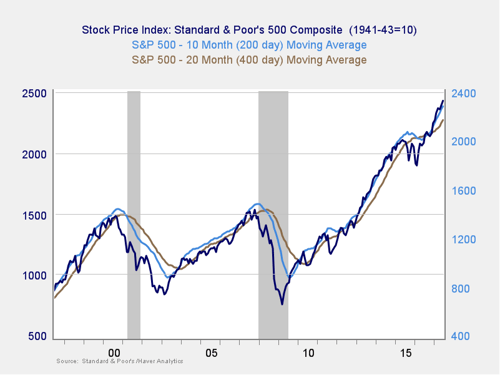 As illustrated in the above chart, both of these indicators remain positive, with the S&P 500 well above both trend lines. Even as markets continue to reach new highs, it’s possible that the advance will continue given growth in earnings and positive consumer, business, and investor sentiment. A break into new territory could actually propel the market higher, despite the high valuation risk level. With the index well above the trend lines, the likely trend continues to be positive.

Conclusion: Signs of weakness but conditions remain favorable for now

The overall economic environment remains supportive, and neither of the likely shock factors are necessarily indicating immediate risk. Similarly, several of the market indicators point to an elevated level of risk, but that risk does not appear to be immediate. So, although risk levels have increased moderately, the market environment seems favorable in the near term, and we remain at a green light for this month.