March was another terrible month for markets. It capped off a turbulent quarter, as the spread of the coronavirus led to even more fear and uncertainty during the month. U.S. markets fell into bear market territory for the first time in a decade, despite unprecedented levels of monetary and fiscal stimulus from the Fed and Congress, respectively. There have been some signs of improvement to start off April; however, there are several key factors that matter for the market in determining the overall risk level.

Recessions are strongly associated with market drawdowns. Indeed, 8 of 10 bear markets have occurred during recessions. As we discussed in this month’s Economic Risk Factor Update, right now the conditions that historically have signaled a potential recession could very well be here. On an absolute basis, a majority of the major signals are now in a high-risk zone, with the others at yellow. As such, we have downgraded economic factors to a red light for April. 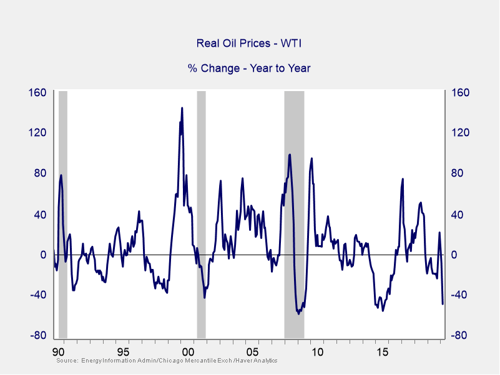 The price of oil fell by nearly 50 percent on a year-over-year basis in March, as lowered global demand combined with a production war between Saudi Arabia and Russia sent prices tumbling. This decline on a year-over-year basis matches levels last seen during the energy crisis of 2015. The price of oil fell from an average of $50.53 per barrel in February to $29.46 per barrel in March. This is the lowest monthly price we’ve seen since 2003. Typically, lowered gas prices are a boon to consumers; however, with much of the country sheltering at home and limiting travel, the benefit was likely minimized during the month. Going forward, sustained oil prices at these levels signal a risk, with the energy industry being massively disrupted, as we saw back in 2015. While lower prices would normally have also generated an offsetting stimulus, as consumers spend less to drive, the shutdown of the economy has eliminated that. On balance, we’ve downgraded this signal to a yellow light for now. 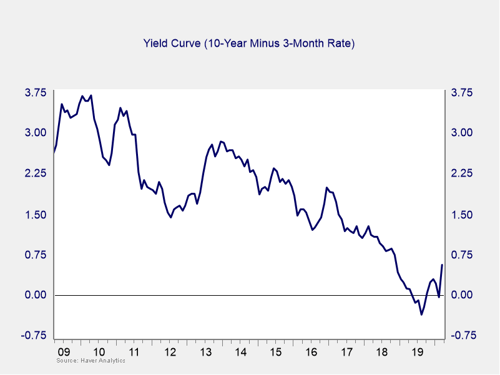 After spending the fourth quarter un-inverted, the yield curve re-inverted in January, remained inverted throughout February, and un-inverted again in March. This un-inversion was driven by a sharp drop in short-term rates, which was caused by the Fed’s decision to cut the federal funds rate to effectively zero percent during the month. The yield on the 3-month Treasury fell from 1.13 percent at the start of the month to 0.11 percent by month-end. The yield of the 10-year Treasury also fell as investors fled to the relative safety of Treasury bonds; however, this was a more muted drop, falling from 1.10 percent to 0.70 percent during the month, leaving the gap at 59 bps.

While an inversion is a good signal of a pending recession, it is when the gap between the two yields subsequently widens to 75 bps or more that a recession becomes imminent—and that is what has just about happened. With the spread continuing to widen and approaching the critical level, we are taking this indicator to a red light. In conjunction with other monetary and fiscal policy actions, the widening clearly indicates rising risk. 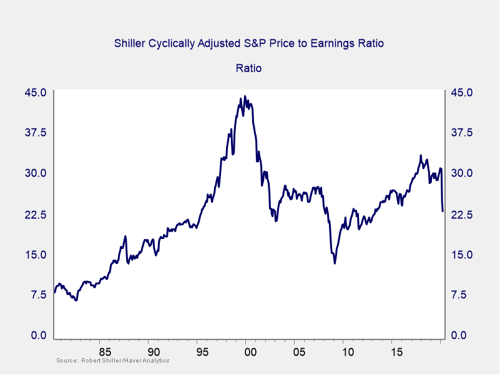 Valuations fell sharply in March, down from a P/E of 30.79 in February to 24.81 in March. This drop brought the ratio to its lowest level in nearly seven years. The 19.4 percent decline on a monthly basis is in line with the 19.5 percent decline we saw in October 2008. 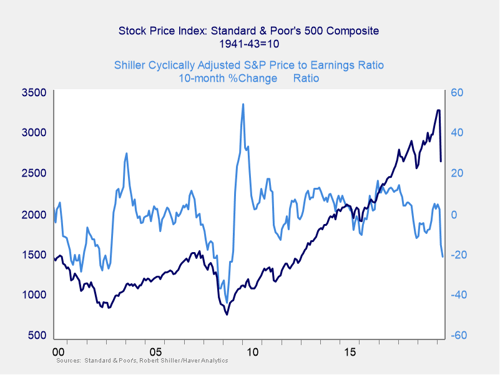 Here, you can see that when valuations roll over, with the change dropping below zero over a 10-month or 200-day period, the market itself typically drops shortly thereafter. This relationship held in March. Markets continued to show spiking volatility during the month, as investors continued to favor safe-haven assets over equities.

Given the sharp decline in valuations and markets during the month, we’ve downgraded this signal to a red light. 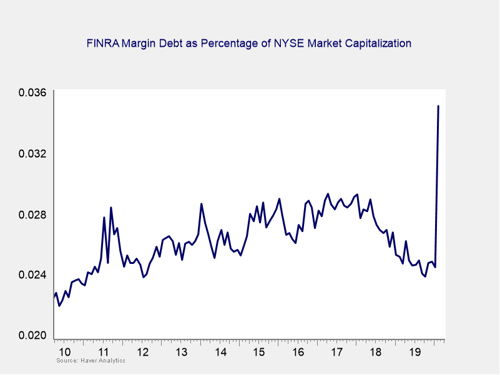 Debt levels as a percentage of market capitalization had dropped substantially over the past two years, to close to the lowest levels of the recovery, before spiking dramatically in February to an all-time high. The overall high levels of debt are concerning. 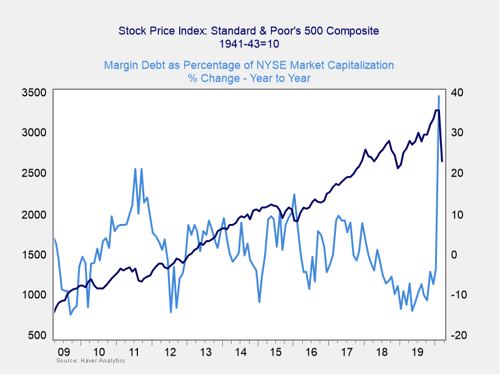 As you can see in the chart above, the annual change in debt as a percentage of market capitalization increased dramatically during the month, up more than 39 percent. This indicator is now signaling immediate risk. Given that, and the fact that the overall debt level remains high historically, it is worth watching. So, we are downgrading this indicator to a red light.

Technical factors showed a breakdown of investor confidence. All three major indices ended the month below their respective 200-day moving averages, marking the second month in a row below this important trend line for both the S&P 500 and the Dow Jones Industrial Average. The Nasdaq Composite was a bit more resilient and managed to finish February above its trend line; however, the selling pressure in March brought this index below the trend line by midmonth, where it stayed until month-end.

The 200-day trend line is an important technical signal that is widely followed by market participants, as prolonged breaks below this trend line could indicate a longer-term shift in investor sentiment for an index. The 400-day trend line is also a reliable indicator of a change in trend. As we saw in March, the continued downturn has broken both, indicating that market volatility is likely to continue in the short term. We’ve kept this signal at a red light given the important technical levels that remain breached.

Both fundamentals and markets deteriorated during the month, as the reality of the economic damage caused by the widespread measures to combat the coronavirus has set in. We downgraded the market risk factors to red last month and are keeping them there for now given the fact that they appear to be reflecting an exogenous shock: the coronavirus pandemic.

The recent technical breakdown in the indices is being driven not by fundamental factors but, rather, by fear around the spread of the coronavirus. As such, we cannot assume that the recent volatility we’ve experienced will follow the same swift bounce pattern we observed in previous pullbacks, and we have assigned greater weight to the market behavior indicators than to the fundamentals. Recent behavior, with market uncertainty created from the spread of the coronavirus, is likely to continue until the virus has been brought under control.

As such, we are keeping the overall market risk indicator at a red light. This is not a sign that end times are here for markets. Instead, it is a recognition that markets have begun to more fully price in the effect of the coronavirus spread and that the uncertainty created by the situation will likely lead to more short-term volatility.