Midterm Elections No Longer a Worry for Markets 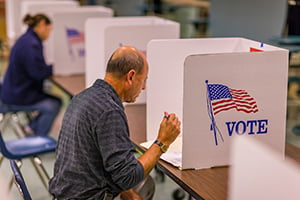 This will be a short post, partially because I am in San Diego at Commonwealth’s National Conference, but mostly because there isn’t much to say about the midterms that I did not already cover the other day.

Let’s start with the National Conference. Yesterday had cold temperatures, howling winds, and heavy rainfall. Coming from Boston, I felt right at home. But for San Diego, this was not normal and certainly not what I expected (or packed for). Fortunately, though, we had lots of good content here at the conference to keep everyone inside. So, even though the weather didn’t meet expectations, it was still a valuable day.

The reason I bring this up is that I could say the same for the midterms. Unlike San Diego, stormy weather was expected there, with worries about election violence and fraud widely forecast and with a red wave knocking over multiple incumbents. Just as with the weather here, but in the opposite direction, expectations were reversed. Instead of chaos and violence, reports so far are that the elections largely went off smoothly. Instead of widespread gains by Republican candidates, the election seems to have been largely a draw. In San Diego, we expected sun and got rain. In the midterms, we expected a storm and got a drizzle. So it goes.

With a number of races still not final, the most likely outcome looks to be a Republican-controlled House, with a very narrow majority, and either an evenly split Senate, resulting in Democrat control, or possibly a 51-seat Republican-controlled Senate. Yes, there were some surprises on both sides. But when the dust settles, the net change in the number of seats held by each party looks to be fairly small.

Politically, those small changes could have large effects. But the economic results are likely to be much less. That tight of a split in both houses of Congress will constrain any policy action and will almost certainly prevent any veto overrides on laws that do get through. So, we will not see anything even vaguely controversial in this Congress, which means we pretty much know that current fiscal policies will remain in place: no tax cuts and no major spending bills for the next two years. For better or worse, that gives some certainty around a significant part of the economic playbook. And that is a good thing, from a market perspective. Markets hate uncertainty, and the midterms with their prospects of both unrest and potential systemic policy changes have been a worry. Now that worry is resolved.

That is a positive sign for the future. Historically, markets have tended to underperform in midterm years, but then pick up after the elections. We have certainly seen the former and can now hope to see the latter as well. With both political and fiscal policy largely off the worry list for the moment, we can now return to more purely economic concerns. And, just as we saw at the conference here in San Diego, it might not be what we expected, but that alone makes yesterday a valuable day.