Market Turbulence: Nothing to Worry About Yet

On the heels of our premortem of the stock market in 2015, let's take a look at the market turbulence we experienced last week and yesterday.

The short version? There’s nothing to worry about yet.

Where is the weakness coming from?

The largest factor is fears about global economic growth. Historically, declining oil prices have been a sign of trouble ahead for the global economy. To many, the recent collapse in prices suggests that we’re in for really tough times. Naturally, investors are pulling back on risk, stepping away from stocks, and getting more defensive in general.

The other major problem has been Russia. After hiking interest rates to panic levels last night but continuing to see the ruble decline in value, Russia is looking more and more like a crisis candidate. Russian collapse has kicked off international crises before, and a Russia under economic stress has a history of turning nasty militarily. These are real concerns.

Overall, though, the market doesn’t seem too worried

That said, the market is down less than 5 percent so far from all-time highs, suggesting that, at least here in the U.S., investors aren’t all that worried. Were the market seriously concerned, we would have seen more of a correction.

We may yet. Futures are down as I write this, and the press has started to make comparisons between now and 1998, the year of the last Russian financial crisis. With weakness in Europe, slowing growth in China, and a strong dollar putting pressure on emerging economies, a crisis in Russia could lead to further turmoil around Asia, rather than the other way around, as in 1997–1998. Things could get worse.

Here in the U.S., luckily, our exposure is indirect and limited. While there may be a short-term shock, lasting damage seems unlikely. Looking at 1997–1998, we see a decline in the S&P 500 but also a sharp recovery afterward. 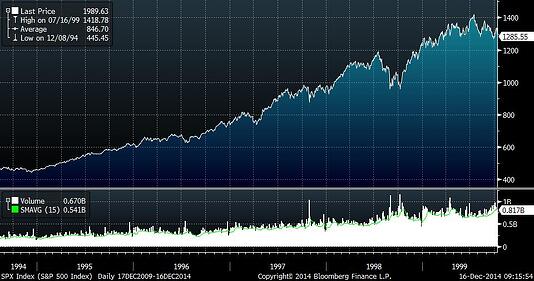 Then, as now, the U.S. had growing employment and an expanding economy. Then, as now, oil prices had declined substantially. There are a lot of similarities between then and now, and there will probably continue to be. We may well see some stock price declines, as we did in the late 1990s.

With a growing economy, however, we’re well positioned to ride out any systemic shocks and continue to expand.

In other words, while we could well see more weakness, it certainly isn’t preordained, nor is it necessarily something to fret about, especially over the longer term. While there are indeed things to worry about and plan for, these recent declines aren’t among them.