Looking Under the Hood of the Latest Jobs Report

This morning’s jobs report came out, and we have all seen the data. Job growth is down, but the unemployment rate is also down. Hiring is weak, but more people have jobs. This makes perfect sense, not. What’s going on here?

Most of the analysis out there has pointed out that jobs are growing faster than the labor force, creating a labor shortage and pushing wages up faster. All true, so far as it goes. But I want to suggest that something else is going on that could exacerbate those effects—and make the labor shortage even worse from an employer’s point of view.

I want to start off by defining the frame I am using here. The “jobs report” that shows up in the headlines consists of two different surveys and data series. The nonfarm payroll report surveys businesses and generates the nonfarm payroll number, which is the number of new jobs for which people have been hired. There is also, however, a household survey, which looks at workers rather than firms, and reports how many of those workers have jobs. In theory, the two should be roughly equal, and the relationship should be stable over time.

But when you compare the two? They are not the same and that relationship is not stable, which implies there is something deeper going on. Remember, we are working with two actual data points: the number of jobs and the number of workers. The relationship between the two can be expressed as jobs per worker or workers per job. It is in those ratios that I think we can find some meaning.

Let’s start with workers per job. On a first-order basis, this is the demographic effect, and I have discussed it before at some length. As population growth has slowed and the number of jobs available has increased, there are fewer and fewer “excess” workers beyond those needed to do the work. This dynamic pushes wages up, as employers compete for those workers. But the chart below captures only part of the picture, and it doesn’t account for the rising number of jobs that have not been filled. There is something going on beyond the demographic story. 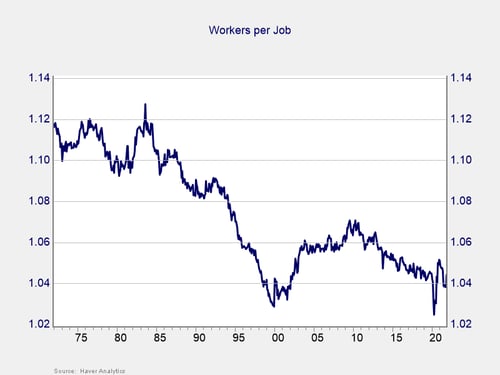 We can see more of what’s going on in the chart below. Jobs per worker would be the number of jobs that the average worker has. Looking back at the past 50 years, we can see that in the 1970s and 1980s, the average worker (who had to work) had less than one job, showing excess labor supply. But in the boom years of the 1990s, excess labor was absorbed, only to rebound in the 2000s. We saw another rebound in the financial crisis, only to see the ratio drop through the 2010s. Other things equal, we would expect to see that average rate drop back to prior levels, but it didn’t. Part of that is demographic, but the response to economic conditions clearly shows there are other factors involved. And that is what we need to figure out. 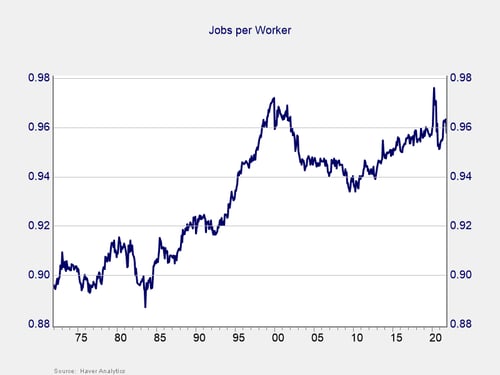 What looks to be happening is a second-order effect of the demographically driven tightening of the labor market. Fewer workers and more jobs available mean higher wages, as we are seeing. But higher wages—and better working conditions in general—can also mean fewer workers. When labor conditions are tighter, more people can afford not to work or not to work multiple jobs. When labor markets tighten, more families can get by on one paycheck, and more people can get by on one job. That change effectively decreases the size of the labor force. And when the size of the labor force drops, the jobs per worker increase, as we can see above. Good times can mean fewer workers, which can mean more jobs filled per available worker. Right now, as we can see, we are close to prior maximums.

Will Things Get Worse?

Going forward, the big question is this: as the number of jobs increases with respect to the workforce, will workers respond by taking more jobs? Can we push that number up further? If so, then the demographic supply crunch can be at least partially alleviated. If not, the labor supply issue may continue getting worse.

My bet is that it keeps getting worse. If you think about it, most people work to live. If you can live on one job—or if your family can live on one paycheck—why would you want or need a second job? The data shows that there are limits to that potential adjustment. In boom times, such as the late 1990s and just prior to the pandemic, the jobs per worker seemed to max out at about 1.0. And I think that makes sense.

This brings us to the present, where the jobs per worker number is once again approaching 1.0. Other things being equal, if the average worker or family can support themselves on one job, then that is likely to be a maximum. That suggests the labor crunch is likely to persist, and may even get worse, the closer we get to 1.0.

This post is a first take on this issue, and I can see some holes in the argument. At the same time, this is probably one of the biggest questions that needs to be answered as we figure out how the labor force and economy will evolve in the next decade. I will be spending more time on this, but right now, I would say expect more jobs reports like this one.