Is the Stock Market Getting Overextended?

With all of the data out there—and all of the different takes on where the economy and financial markets are going—is there a warning sign that can tell us if the stock market is getting overextended?

I track several signals that are good economic indicators, but the stock market is tougher. There aren't any really good signals out there. Even the one I use most, the 200-day moving average, isn’t all that great.

One sign of a pending top, though, has become more apparent in recent weeks: investors are increasingly invoking 1999 to explain why the market is now reasonably priced.

I was at a meeting recently where we were asked to remember what the forward price/earnings ratio was at the end of 1999. The answer was 25—the implication being that the current value of 17 is actually pretty reasonable.

I’ve seen the 1999/2000 comparison pop up in other commentary as well. The idea—since we’re not yet at the 1999 peak, the market is reasonably valued (and, in fact, poised to go higher)—seems to be gaining traction.

Let’s stop and think about this for a minute

As market analysts, we all love history, and we all love statistics. Much as in baseball, where there are numbers about left-handed batting averages against pitchers with no vowels in their name, you can find a market stat to support virtually any argument you want to make.

So why is 1999 being used as a support for current market valuations? Could it be because there's really no other stat that can make the market look reasonably valued? And if so, what does that mean?

Right now, the forward P/E ratio for the S&P 500 is 16.6, per the Wall Street Journal. This is about the level the forward P/E peaked at in 2007, before the financial crisis, as you can see in the following contemporaneous chart from John Hussman. 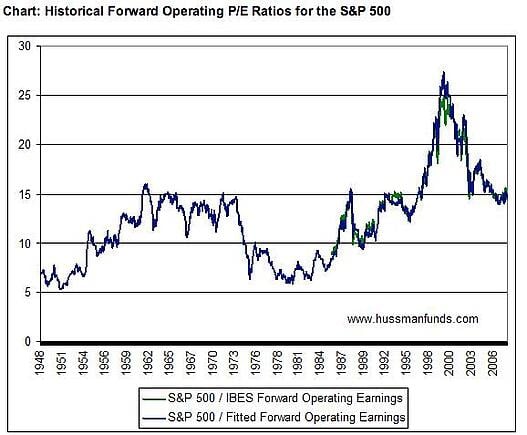 What the chart also shows is that, setting aside the dot-com bubble, the 2007 level is about the highest point since World War II.

Let me spell that out for you: Aside from 1999/2000 and the aftermath, the market is about as expensive as it's ever been since World War II. Anyone who uses the 2000 peak as an indication of reasonableness is doing so because he or she has no other stat to support the market being cheap.

Forward earnings are based on expectations, not reality. The actual earnings almost always come in under expectations. Even for Q2 2014 (that is, now), we’re seeing the market go up even as earnings expectations go down, per this chart from FactSet. 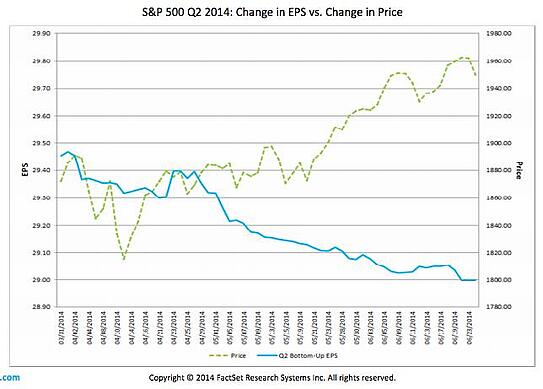 So, aside from 1999/2000, the market is as expensive as it has ever been, or close to it, based on earnings that probably won’t hit expectations.

Why not? Earnings have been largely driven by share buybacks, low capital expenditures, and lower debt service costs as companies refinance at lower rates. I’ve written about these factors before, and as tailwinds, they’re reaching the end of their lives.

Is the stock market getting overextended? Consider the assumptions baked into current valuations, and whether they make sense:

When people compare current market conditions to those of 1999, the message I take away isn't so optimistic. Comparing where we are now to where we were then, I suspect there may be more similarities than any of us would really like.