Is the End of Economic Expansion Near?

Yesterday was a big day for me. I had the opportunity to speak at the Jet Propulsion Laboratory (JPL), one of NASA’s major labs. JPL runs the planetary science missions, including the Voyager probes. In the picture below, I’m in front of a model of the Voyager, which is one of the only human-made objects that has actually left the solar system. For a science fan like me, this trip was about as good as it gets. Thanks to Terry Himes of JPL for setting it up and leading a tour afterwards. It was a truly wonderful experience! 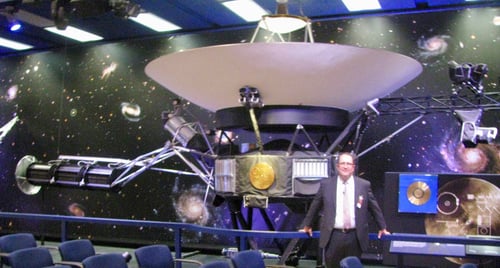 Back to earth: Consumer confidence takes a hit

Oh yes, other things happened yesterday as well, including an event that is potentially a real signal that we may be getting close to the end of the expansion. No, I am not talking about the decision by House Democrats to launch a formal impeachment inquiry of President Trump (although that will no doubt come into play). Rather, I’m pointing to the substantial decline in the Conference Board’s measure of consumer confidence that was reported yesterday.

This drop is a bigger deal than it may appear. The actual decline, from 135.1 to 125.1, is bad enough—a 10-point drop in one month is quite unusual. But we have seen declines like this before. Worse is the fact that the drop took us from up slightly over the past year to down by 7.5 points over the past year. Historically, a 20-point drop, year-on-year, has been a good signal of a recession. We are now much closer to that point than we were a month ago. Another drop like this past month would pretty much get us there.

Another sign of potential trouble is that the gap between present confidence and future expectations widened again. As we have discussed before, when that gap gets wide—as it has been—it means that confidence levels are fragile and might suddenly break down. The gap had been narrowing, which was a positive signal. But this month, it widened significantly. That wider gap makes another substantial drop more likely, which could take us even closer to, and even beyond, the trouble point for this indicator. All of a sudden, a recession signal here seems likely if not yet probable.

This weakening has also been confirmed by the other major survey of consumer sentiment, done by the University of Michigan, which has gone down over the past several months. With weakening seen in both surveys, the chances of something systemic are material.

Is the job market weaker than it appears?

What makes this situation especially concerning is that the weakness is taking place even as gas prices remain reasonably low and the stock market is close to highs. These facts should help keep confidence high. When these factors deteriorate, they often drive swings down, but they are not the reason for the decline this time. Instead, the most probable candidate seems to be that the job market may be weaker than it appears. Here, too, we have some evidence that may be the case, as the job numbers are scheduled to be revised down significantly sometime in the next several months. Our current data may be painting too rosy a picture, and the consumer confidence numbers, which are more timely, may be catching the reality ahead of the official jobs data. If that downward revision happens, it could also generate a recession signal, and sooner than we thought.

Political risks on the rise

Back to the impeachment process. Another driver of weakening confidence has very likely been the political process, tariffs, and the trade war, but now we have to add the impeachment inquiry to that list. Political factors are likely to get worse rather than better over the next several months, which will put more pressure on confidence and, again, raise the risks. Between the pending downward jobs revision and the weakness in confidence, two of our major economic indicators may be closer to the trouble zone than we thought.

For me, that means it's time to start paying closer attention to the things of this world, rather than of outer space.

It was still really cool to see JPL though.