Is Spring on the Way for the Economy?

As the end of the first quarter approaches, expectations are high for a new burst of economic growth. With consumer confidence at the highest point since before the financial crisis, business confidence rising to very healthy levels, and job and wage growth continuing to move in the right direction, spring seems just around the corner.

Here in Massachusetts, I feel the same way about the season itself. The sun is coming up earlier and earlier, thoughts of summer in Maine keep cropping up when I should be working, and my son had his first outdoor practice last night. Spring seems like it should be on the way.

And yet, there’s still over a foot of snow on my deck and ice covering much of my driveway. My wife reports that the outdoor practice got incredibly cold for the spectators after the sun went down. There's ice on the reservoirs and ponds as I drive to work. Clearly, the spring news hasn’t gotten through to the actual weather systems. It still looks a lot more like winter when I glance out the window.

Things are much the same for the U.S. economy. As I reported yesterday, large parts of the economy aren’t experiencing the kind of bounce that we would expect, based on the surveys. In fact, the difference between the soft data (the surveys) and the hard data (what people are actually doing) is as large as it's ever been, as you can see in the following chart from Absolute Strategy Research. 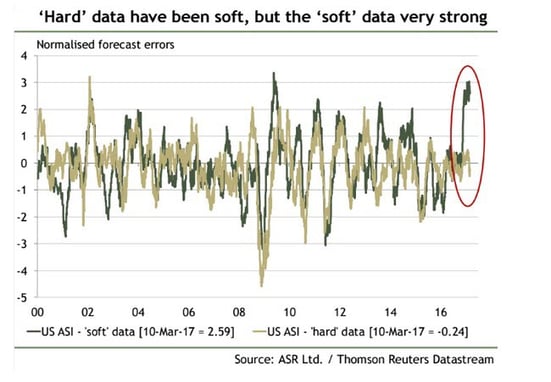 The difference between the economy and the seasons, of course, is that we can be much more positive that spring will indeed show up—even here in Massachusetts—than we can that the economy is finally accelerating. Do we need to worry that we’re headed back into an economic winter?

First of all, a reality check. Some of the recent data has been soft, but more of it has been either acceptable or very good. Even much of the soft data, such as industrial production, has been far better than it looks on the surface.

Second, how bad the data looks depends on the information you decide to focus on. My own data points, which I update monthly, suggest things are getting better, not worse. Still, you can get widely different results. For example, the New York Fed’s first-quarter growth estimate is at 2.8 percent, while the Atlanta Fed’s estimate is 0.9 percent. That’s a big gap between two branches of the same organization. At this point, there’s clearly not a real signal either way. Reports of the economy’s death are, at the very least, premature.

Plenty of reasons to think spring

Even if first-quarter growth actually is slow, would that necessarily be a bad signal for the rest of the year? Recent history suggests it probably won’t matter.

In the past three years (2014 through 2016), the first quarter has been notably weaker than preceding quarters, and growth has bounced back in subsequent quarters. It seems to be a measurement issue, but whatever the reason, a weak first quarter hasn’t been a harbinger of doom. So even if we get one, I won’t be worrying just yet.

In fact, despite some of the weak data, there are definite signs that spring is coming. Job growth, wage growth, and business investment are all improving. Strong confidence hasn’t yet moved the needle but is nevertheless a very positive sign. Even in Massachusetts, spring eventually arrives, and even in the aftermath of a crisis, the economy will fully bounce back at some point. The signs are better now than they have been since the crisis.