The data for February was positive across the board, recovering from some slight pullbacks the previous month. The indicators we track here continue to point toward economic expansion, which is encouraging following the downtrend established in 2016. This marks the fourth straight month of positive data, indicating that the current uptrend may be here to stay. 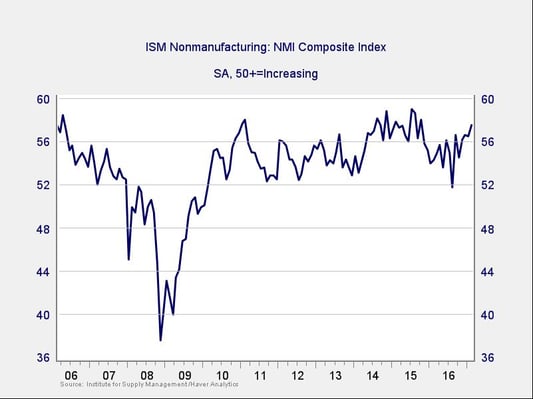 In 2016, the service sector, as measured by the ISM Non-Manufacturing Index, saw a large dip to post-recession lows. Since then, however, service sector sentiment has improved by way of a volatile rally. The increase this month to levels not seen since 2015 indicates that continued business and employment expansion is likely. High levels of consumer confidence and spending also support future growth in the economy.

The service sector is the largest component of the economy and an important leading indicator, and it remains a green light. 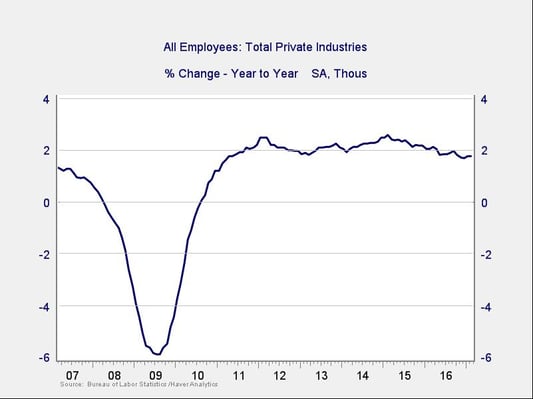 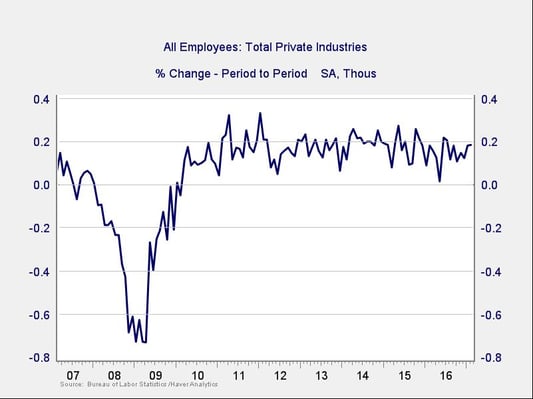 These are the same numbers as in the previous chart but on a month-to-month basis, which can provide a better short-term signal. February’s job creation beat expectations, both for the headline number and the underlying data. Due to revisions to previous months, wage growth is approaching 3 percent on an annual basis, the highest level since the financial crisis.

We may be seeing a slight weakening of the monthly data, but that is consistent with the late stage of the employment cycle and probably not a cause for concern in the short term, particularly given the last two strong reports. We’ll keep this indicator at a green light. 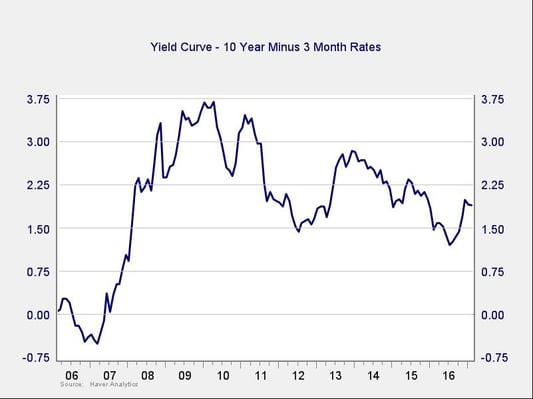 The yield curve flattened slightly during the month, due primarily to increases on the short end of the curve. The market expects a rate hike at the Fed's upcoming meeting, which accounts for much of the rise in short-term rates. The impact of higher short-term rates was partially offset by smaller increases in the intermediate and long portions of the curve.

The spread between the 10-year and 3-month rates remains far outside of the risk zone and shows that this indicator is still a green light. 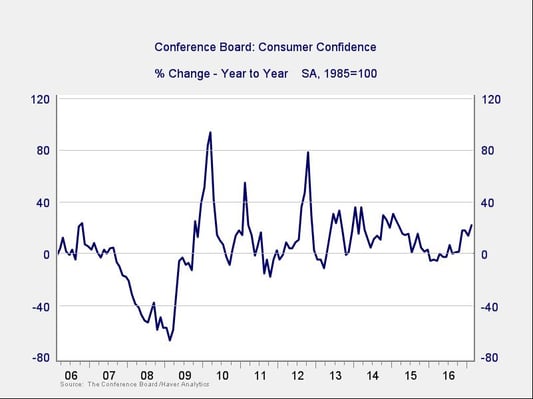 Consumer confidence rebounded from a slight pullback in January to levels not seen since 2001. The impressive rebound in confidence following the November election has boosted the year-on-year growth rate to levels far outside the trouble zone. The continued upward trend in consumer confidence keeps this indicator at a green light.

The combination of increased business and consumer confidence bodes well for future growth. Positive employment growth and improving wage growth also point to the possibility of further economic expansion. Additionally, improvements in the other indicators we track suggest that the recent positive trend is here to stay. Although the Federal Reserve is expected to hike rates soon, financial conditions remain stimulative.

Overall, positive factors seem likely to continue, and the signal for the economy remains a green light.