The recovery continued in August, although at a slower pace as rising medical risks pushed the economic risks higher. Case counts increased throughout the month, with the Delta variant continuing to drive a surge in new infections. The August employment report showed that hiring slowed notably, while consumer and business confidence also declined substantially during the month. Beyond employment, supply chain issues remain an unresolved question, and political risks continue to simmer. Despite the slowdown, however, it’s important to note that the economy is still growing, although risks are rising.

Overall, we’ve kept the economic risk level at yellow for now, but we’ll be keeping a close eye on the rising medical risks and the continued effect they are having on the economic recovery. As we saw in August, very real risks to the ongoing economic recovery remain, and these risks should be monitored in the months ahead. 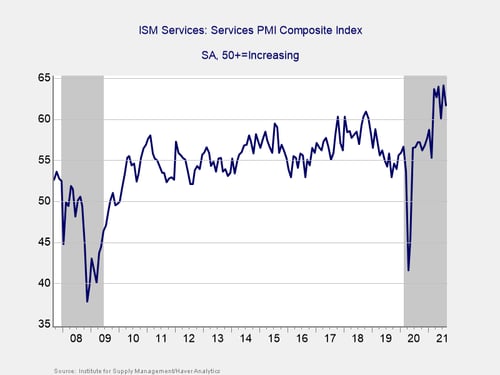 Service sector confidence declined during the month, with the index falling from 64.1 in July to 61.7 in August. This result was slightly better than economist estimates for a further drop to 61.6. This is a diffusion index, where values above 50 indicate growth. So, this result still signals continued expansion for the service sector during the month, despite the decline for the index.

July’s result marked a record high for the index, so the moderate decline in August is understandable, especially when rising medical risks are taken into account. Additionally, service sector confidence still remains well above pre-pandemic levels and has remained there for six consecutive months. Service sector confidence has been supported throughout the year by public health improvements and the associated easing of state and local restrictions that have given business owners more confidence in the ongoing economic recovery. With that being said, the rising medical risks could lead to further restrictions at the state and local levels, which in turn may negatively affect service sector confidence. While this is not an immediate concern, it is worth monitoring given the importance of the service sector on the overall economy.

Given the fact that service sector confidence remains well above pre-pandemic levels, we have left this indicator at a green light for now. 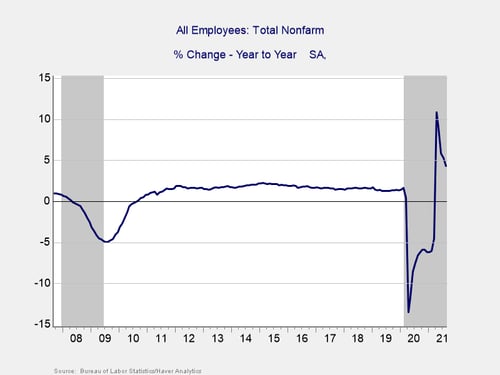 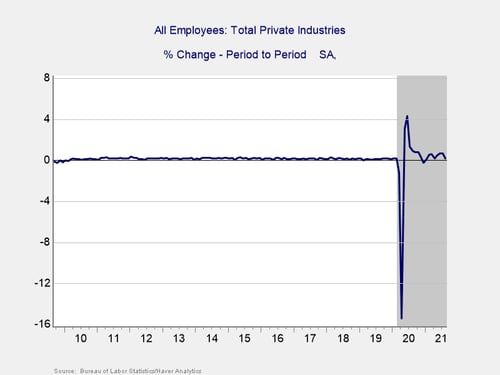 August’s employment report showed that the economy added 235,000 jobs during the month, which was down from the upwardly revised 1,053,000 jobs that were added in July and well below economist estimates for 733,000 additional jobs. This disappointing result marks the fewest number of jobs added in a month since January; however, it also marks eight straight months with job growth.

The year-over-year rate of job growth fell from 5.3 percent in July to 4.3 percent in August. The slowdown in hiring during the month was concerning, as the total number of jobs across the economy is still down by more than 5.3 million compared with the pre-pandemic peak. 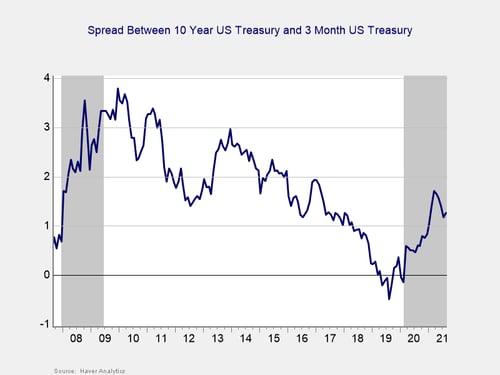 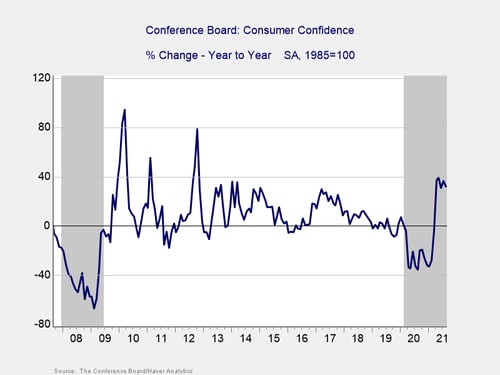 Consumer confidence declined by more than expected in August. The Conference Board Consumer Confidence Index dropped from a downwardly revised 125.1 in July to 113.8 in August, against forecasts for a more modest decline to 123. This disappointing result brought the index to its lowest level in six months and signals growing consumer concerns about the Delta variant.

While the 31.9 percent year-over-year increase in confidence was largely due to a sharp drop in confidence last spring and summer, the index remains well above the lockdown-induced lows from last year. Historically, declines in confidence of 20 percent or more over the past year are a signal of a recession. As such, the improvement in the year-over-year data throughout the course of the year has been encouraging, as it has brought the year-over-year figure out of the historical danger zone.

Given the fact that confidence remains well above the lockdown-induced lows and strong on a year-over-year basis, we have left this indicator at a green light for now. With that being said, further declines in the months ahead could lead to a downgrade.

The economic data releases in August largely painted a picture of slowing growth for the economy due to rising medical risks. While we saw the pace of growth slow during the month, it’s important to remember that slowing growth is still growth and that the economy remains in a better spot than even a few months ago.

Looking forward, continued growth remains the most likely path forward. But as we saw in August, there are real risks that remain to this outlook. The pullback in both consumer and service sector confidence during the month is a sign that spending growth may also be negatively affected by the rising medical risks in the months ahead. Ultimately, the pace and path of the expected recovery are uncertain due to these rising medical risks; therefore, caution is still warranted.

We have left the overall economic risk indicator at a yellow light to reflect the rising uncertainty created by the Delta variant and the potential for setbacks in the months ahead.