The economic recovery continued into August, but many of the economic factors that we track in this piece still signal signs of stress. Confidence was particularly concerning, as both consumer and service sector sentiment fell during the month, although there were signs of consumer confidence improvement at month-end. A better-than-expected August jobs report was certainly welcome, but it highlighted the headwinds that continue to affect the labor market. Overall, the economic updates released during the month largely reiterated the fact that there is still a long way to go to get back to pre-pandemic activity levels and that risks to the economic recovery remain. 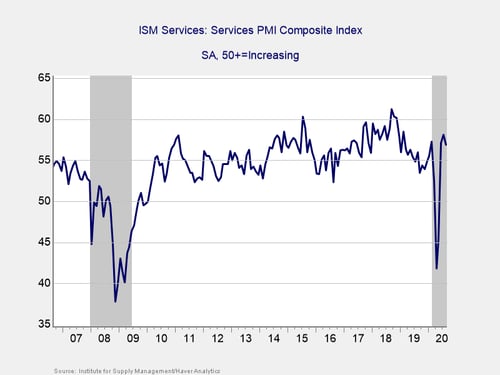 This measure of service sector confidence disappointed slightly in August, falling by more than expected. The index fell from 58.1 in July to 56.9 in August, against forecasts for a more modest fall to 57. This is a diffusion index, where values above 50 indicate expansion, so the index still signals growth, albeit at a slightly slower rate than in July. Service sector confidence hit a pre-pandemic high of 57.3 in February, so even with August’s slightly disappointing result, the index remains in line with pre-pandemic levels.

The service sector accounts for the lion’s share of economic activity, so the rapid rebound in confidence we saw once reopening efforts kicked off in earnest was a good sign for the ongoing economic recovery. Given the continued growth signal, we have left this indicator at a green light for now. 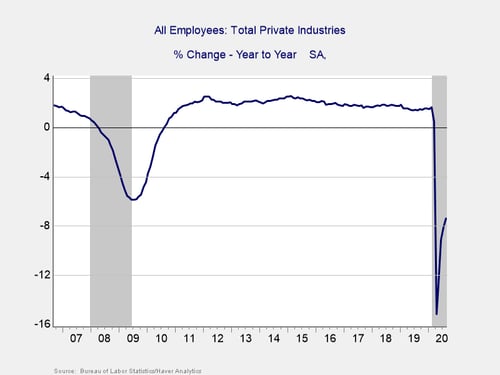 August’s employment report showed 1.37 million jobs added during the month, against economist estimates for 1.35 million additional jobs. This marks four straight months with more than 1 million jobs added. The unemployment rate fell to 8.4 percent in August, down from 10.2 percent in July and better than economist expectations for a more modest decline to 9.8 percent.

This positive report, following July’s better-than-expected result, indicates that the worst is likely behind us in terms of job losses. With that being said, the damage caused in March and April leaves overall employment levels far below where we were a year ago, and we will need several more months with very strong job creation to get back to pre-pandemic levels. Despite the positive results over the past four months, we’re keeping this indicator at a red light for now, given that overall employment levels are still extremely weak on a year-over-year basis. 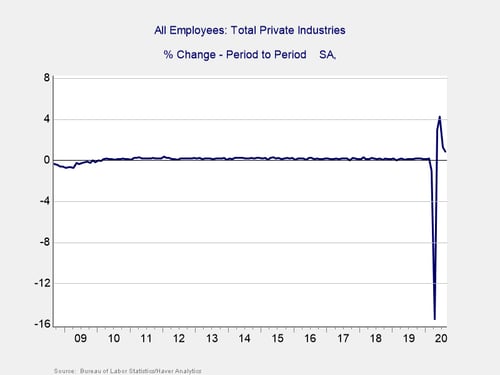 These are the same numbers as in the previous chart but on a month-to-month basis, which can provide a better short-term signal. Although August’s report was positive, the data needs to be taken in context, as we lost more than 22 million jobs in March and April. August also marks the worst month for new jobs since reopening efforts began, indicating that the tailwind from those efforts and government stimulus may be starting to fade. The unemployment rate remains very high on a historical basis. Given the massive disruption to the job market in March and April and the still historically high unemployment rate, we are leaving this indicator at a red light. 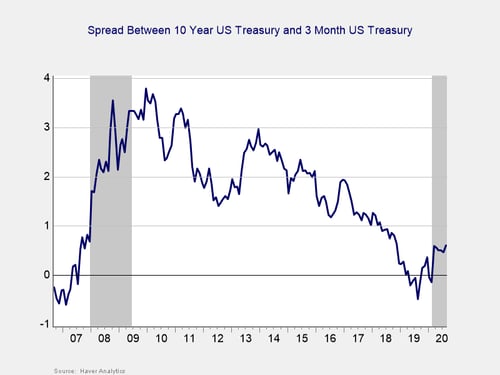 The yield curve started the year inverted, and it un-inverted in March, where it has remained throughout the pandemic. This un-inversion was driven by a sharp drop in short-term rates, which was caused by the Fed’s decision to cut the federal funds rate to effectively zero percent in March. The yield of the 3-month Treasury yield rose modestly in August, from 0.10 percent at the start of the month to 0.11 percent at month-end. The 10-year yield also rose, from 0.56 percent to 0.72 percent.

Although an inversion is a good signal of a pending recession, it is when the gap subsequently approaches 75 bps or more that a recession is likely. We finished August with a spread of 61 bps, and the National Bureau of Economic Research (NBER) declared a recession started in February. In light of that, and with the spread remaining near the critical level, we are leaving this indicator at a red light. 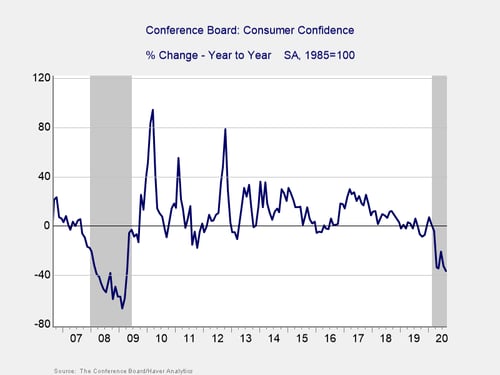 Consumer confidence disappointed in August, with the Conference Board Consumer Confidence Index unexpectedly falling to a six-year low. The index fell from 97.1 in July to 84.8 in August, against forecasts for a modest decline to 93. This drop was caused by cratering consumer views on the current state of the economy, with rising worries about the job market as a primary concern. The index fell below the previous recent low of 85.7 that it hit in April, so this result is a disappointing step in the wrong direction. There were signs that confidence may have started to improve later in the month, but we will need to wait to see next month’s release to confirm any possible improvement for the index.

In the meantime, this lackluster result brought the year-over-year decline for consumer confidence down to 36.8 percent. Confidence declines of 20 percent or more over the past year are typically signals of a recession, which is consistent with the NBER declaration. Given the continued weakness on a year-over-year level and disappointing results in August, we have left this indicator as a red light for now.

August’s mixed data releases highlighted the headwinds the economic recovery still faces despite continued growth during the month. While there were positive developments on the public health front in August, there are still very real concerns that the economic recovery has slowed. August’s employment report is a prime example of this, as the better-than-expected results during the month masked a marked slowdown in the pace of job recovery as the summer progressed.

Ultimately, while August showed the economy continuing on the path of recovery after setting an apparent bottom in April, there is still a long way to go to get back to pre-pandemic levels, and setbacks are likely. Given the slowdown in economic activity from July to August and the damage that was caused in April and March, we are leaving the risk level at a red light for the economy as a whole for September.