We have actually seen some moves worth watching since last month, with signs of slowing, although the overall take remains positive. This, however, is exactly why we look at these numbers monthly—to get an early signal when the economy starts to shift. We are not actually seeing that shift yet—conditions remain good—but the possibility is rising. 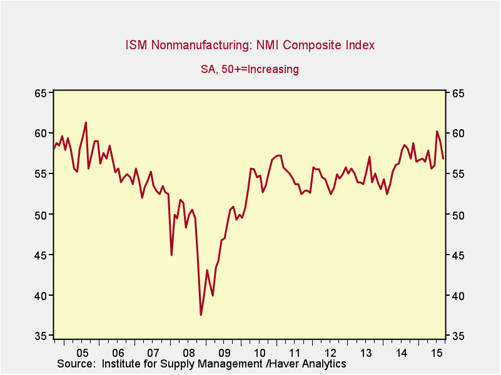 This indicator dropped for the second month in a row, but from a decade or more high, and it remains at a very healthy level, above almost all results since before the financial crisis. Continued strength in the service sector is consistent with business confidence; as the service sector is about seven-eighths of the economy, this is an important leading indicator. 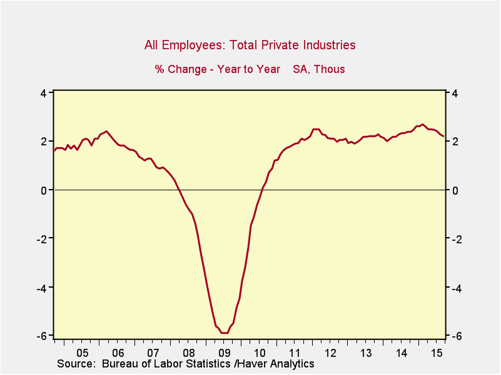 This indicator has also decreased for the past couple of months, but it remains at levels consistent with the strong growth since 2011 and close to the peak growth levels of the 2000s. Because this is an annual figure, changes are slower and smaller than those we see in more frequently reported data, but the level of growth continues to be healthy.

These are the same numbers as in the previous chart, but on a month-to-month basis, which can provide a better short-term signal. Despite very disappointing numbers for the past two months, total job creation does remain positive, rather than approaching the loss level that indicates rising risks. Nonetheless, the trend is in the wrong direction, and this indicator should be watched. 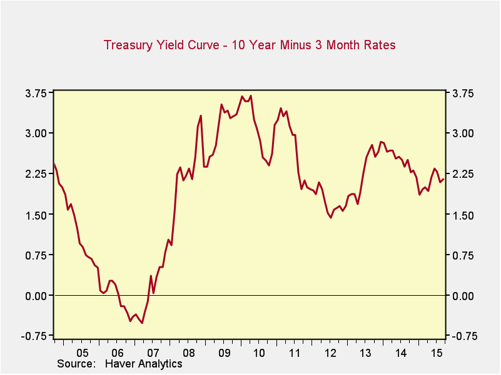 Rates for the 10-year Treasury ticked down very slightly over the past month, while 3-month rates remained relatively stable, leaving the spread essentially unchanged at what continues to be a healthy level. This metric has not changed despite the Fed’s decision to not raise rates, which suggests markets had expected—and continue to expect—the postponement. Monetary policy remains very stimulative, which should continue to support growth. Consumer confidence posted a surprise increase this month, moving the annual change back into positive territory. Although this indicator remains healthy, other confidence indicators have not been as strong, suggesting the risk may have risen. This measure is therefore worth keeping an eye on, but it’s not an area of worry yet.

Conclusion: Nothing to worry about

Despite a couple of indicators that have shown less-than-ideal behavior recently, most of the major signs continue to be positive, with strong service industry confidence a particular bright spot. Despite a possible rise in rates, monetary policy continues to be very stimulative, and longer-term employment numbers remain strong, even with recent weakness. Lower oil prices also continue to bolster the economy, which remains well supported across the board. Overall, notwithstanding some signs of weakness, the signal for this month is a green light.