Once again, it’s time for our monthly update on risk factors that have proven to be good indicators of economic trouble ahead. After flashing a yellow light for the last several months, the change in consumer confidence indicator has declined even further, moving closer to the worry zone. Some signs of weakness are also appearing in other areas, such as the yield curve indicator.

For the economy as a whole, the risk still does not appear to be immediate, but it is rising. That said, many of the signs of a slowdown may be passing on a forward-looking basis, so my overall outlook remains positive—although less so than it was a couple of months ago. 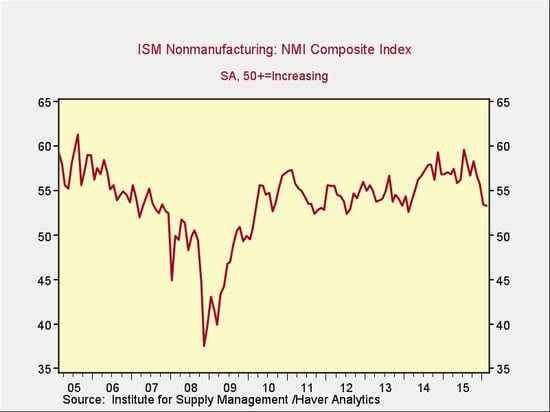 This metric dropped last month, but only very slightly, which may well be a sign of stabilization following the weakness of late last year. The ISM Non-Manufacturing Index remains in positive territory but close to the lower levels of this recovery. While continuing to expand, the service sector has been affected by negative news from the manufacturing sector here in the U.S. and by concerns around the world.

At this level, we can still expect continued business and employment expansion, and hopefully this month’s near-stabilization will continue. Continued strength in the service sector is consistent with business confidence; as a representative sample of the largest sector of business, this is an important leading indicator. 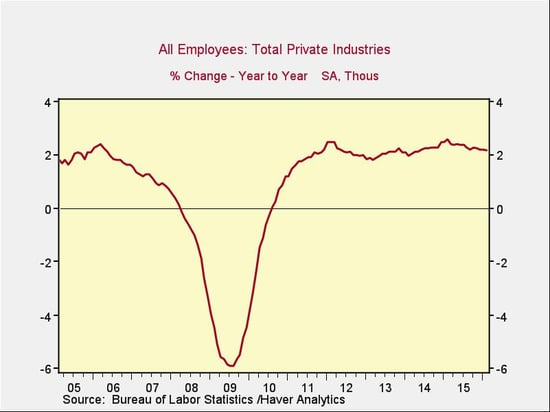 Private employment growth year-on-year continued to decrease slightly, largely because of a weak January report, but it remains at healthy levels, at or above those of the mid-2000s. A very strong monthly figure from February, combined with some positive details in the January report, suggests that the decline in the growth rate may be stabilizing. Because this is an annual figure, the changes are slower and smaller than those we see in more frequently reported data, but the trend continues to look healthy. 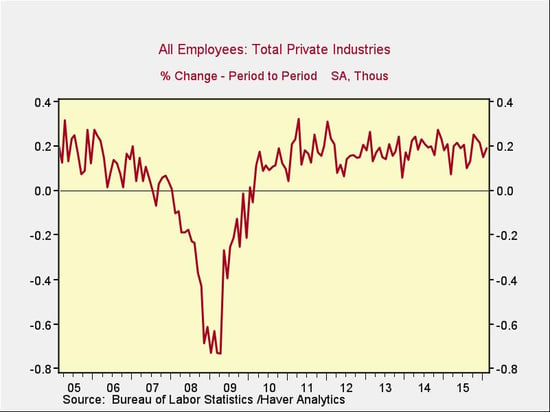 These are the same numbers as in the previous chart, but on a month-to-month basis, which can provide a better short-term signal. February’s job creation was very strong, reversing a disappointing January headline number and alleviating some of the concern about this indicator. Total employment growth continues to be healthy, at the upper end of the range for this recovery. 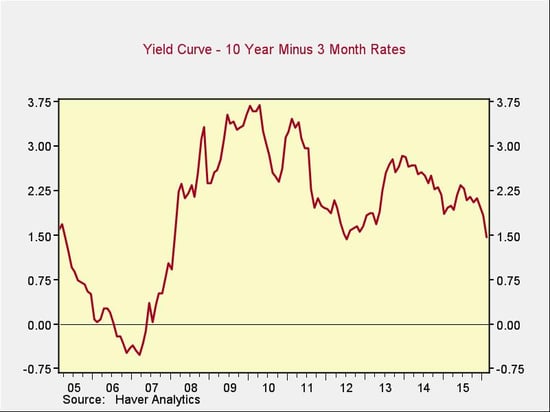 Rates for the 10-year Treasury dropped substantially over the past month, while 3-month rates fell only slightly; the spread between long-term and short-term rates dropped accordingly. Although the spread remains at healthy levels, as with other metrics, the trend over the past couple of months has changed from positive to negative, and it has now extended long enough to suggest a fundamental negative shift. 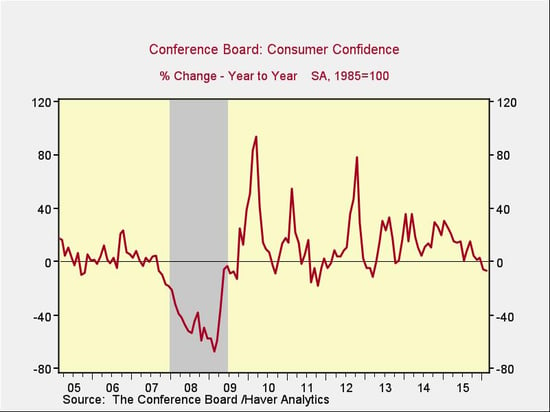 Consumer confidence growth decreased again this month, to an eight-month low, dropping the year-on-year growth rate even further below zero for the first time since early 2013. Along with the other changes in trend, this metric suggests that consumers, the main driver of the economy, are starting to worry. Although the year-on-year growth rate remains well above problematic levels, the combination of the recent negative trend and the drop below zero indicates that a worry point may not be too far off. This is the fourth month in a row that this metric has flashed a yellow light.

With the exception of consumer confidence, all of the major signs continue to be positive. At the same time, all except employment show multi-month changes in trend downward.

Although a slowdown remains quite possible based on the data, a slowdown is not a recession. Beyond that, the continued strength of employment, the most important of the indicators—as well as the near-stabilization of the ISM Non-Manufacturing Index—suggests that the downward trend may be moderating or even starting to improve in the first quarter. Other leading indicators also suggest that the slowdown may be passing.

More yellow lights next month are a real possibility, but not a certainty. On balance, current conditions still warrant a green light for the economy as a whole.