The data for May was mixed. The weak areas—in employment and interest rates—suggest that we might be approaching the end of the recovery cycle. On the other hand, both consumer and business confidence remained high in May, suggesting that the end is likely to be a ways away. Although the data bears monitoring, all of our measures remain in green-light territory, supported by the strength in April’s reports. 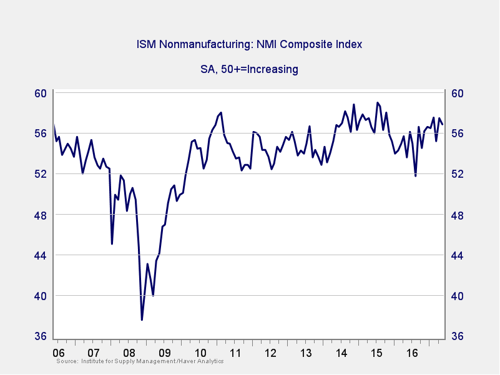 The ISM Nonmanufacturing Index dropped slightly in May but remained in healthy expansionary territory. The consecutive solid readings in April and May indicate that the pullback in March was likely transitory, as overall improvement has been substantial.

The service sector is the largest component of the economy, and this important gauge in business confidence remains a green light. 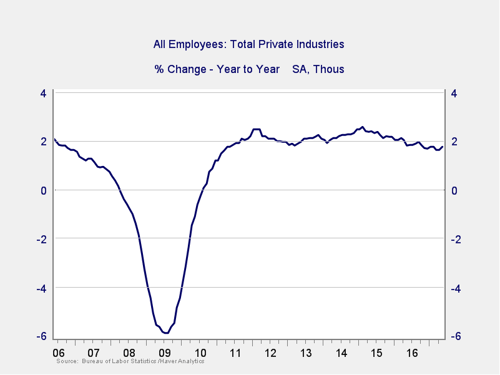 Only 138,000 jobs were added in May, against expectations of 182,000. More, the three-month trend dropped as well, suggesting that job growth is slowing on a longer-term basis. That said, we are still adding jobs, which is constructive for the economy. In addition, a portion of the slowdown may be attributable to a lack of openings, since the unemployment and underemployment rates are both at post-recession lows.

Because this is an annual figure, the changes are slower and smaller than those we see in more frequently reported data; they are also subject to base effects, which is why May’s disappointing data nonetheless led to an uptick on the annual chart above. Overall, given sustained employment growth, this indicator remains a green light. 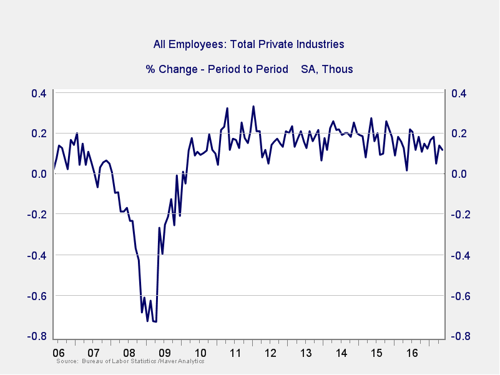 These are the same numbers as in the previous chart but on a month-to-month basis, which can provide a better short-term signal. The May report came in below expectations, but as the chart above shows, it was still within the range we’ve seen over the past year. Further, although a slowing trend is apparent, it is also clear that growth is continuing on a monthly basis.

In addition to the growth in jobs, we’re seeing growth in wages, albeit at slower levels, and the combination continues to support growth in personal income and spending. This indicator remains a green light.

The yield curve flattened further in May, caused by lower inflation data that depressed the intermediate and long portions of the interest rate curve. This flattening may continue, as the market widely expects the Federal Reserve to raise short-term rates at the mid-June meeting.

Although the spread between the 10-year and 3-month rates remains far outside the risk zone, we are getting close to the lowest levels we’ve seen since the crisis. If and when the Fed does raise short-term rates, there is a real chance the spread could drop further. Although this indicator is still in green-light territory, it will bear watching over the next couple of months, so I am adding a shade of yellow. 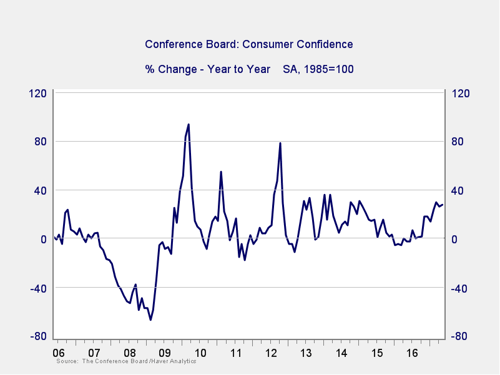 Consumer confidence rebounded from a slight decline in April and remains near a 16-year high. The annual change, which we track here, also remains at a high level. Overall, consumers continue to have faith in the economy, and heightened confidence should lead to accelerated consumption growth in the second half of the year. This measure is still a green light.

Continued high levels of consumer and business confidence bode well for future growth. Although the employment report was weaker than expected, the jobs market continues to grow and should keep doing so for at least the next several months. The only area of current concern is the gradual pullback of the Fed from the economy, which is raising the possibility of interest rates moving from a tailwind to a headwind, but even that remains well outside of the trouble zone.

Overall, while some areas are showing signs of potential weakness, the big picture remains positive, and the signal for the economy remains a green light.