The economy showed further signs of slowing growth in December, with the third wave of the pandemic causing shutdowns that have hit employment. Job creation turned negative for the first time since April, as rising restrictions at the state and local level put increased stress on the labor market. The underlying data showed some signs for optimism, however, as all of the damage came from the leisure and hospitality sector, while other sectors showed surprising strength. Consumer confidence also fell during the month, but business confidence remained surprisingly resilient. 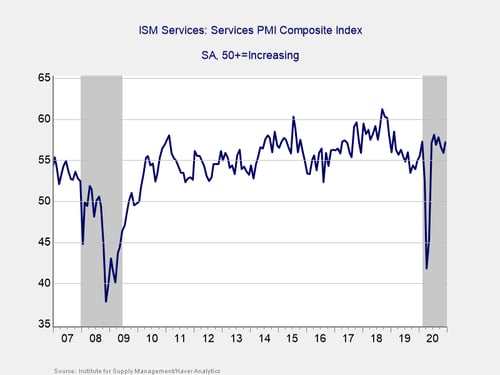 This measure of service sector confidence beat expectations during the month, with the index rising from 55.9 in November to 57.2 in December against forecasts for a decline to 54.5. This strong result broke a two-month streak of declining service sector confidence and brought the index to its highest level since September. This is a diffusion index, where values above 50 indicate expansion, so this was a positive development for the service sector, which accounts for the majority of economic activity in the country. Manufacturing confidence also rose by more than expected during the month, highlighting the continued ability for businesses to successfully adapt in order to handle this current wave of the pandemic more effectively than earlier waves.

Given the better-than-expected result and the fact that confidence remains in expansionary territory and near pre-pandemic highs, we have left this signal as a green light for now. 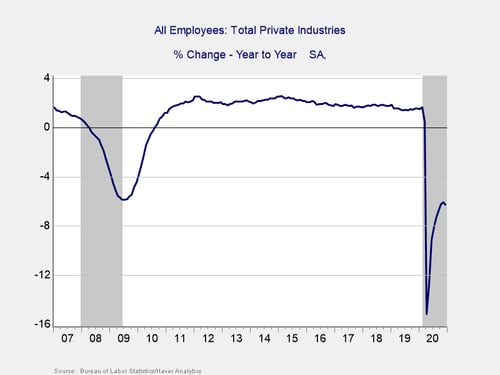 December’s employment report showed that the economy lost 140,000 jobs during the month, which was down from the upwardly revised 336,000 jobs that were added in November and below expectations for a moderate increase of 50,000 jobs. The unemployment rate remained unchanged at 6.7 percent, against forecasts for a modest increase to 6.8 percent. This marks the first month with net job losses since April, as increased restrictions at the state and local level caused a sharp drop in leisure and hospitality jobs that dragged down overall job growth during the month. While the headline decline was disappointing, the underlying data showed surprising strength in hiring for the professional and business services and retail sales sectors, indicating that the headline job loss may be overstating the overall economic damage caused in December.

Looking forward, continued progress in combatting the third wave of the pandemic should allow local and state governments to lift their restrictions, which could, in turn, serve as a tailwind for a swift recovery for leisure and hospitality jobs. With vaccine distribution picking up across the country to start the year, the effects from this anticipated tailwind may start to be felt relatively soon depending on how well we can manage the public health situation over the upcoming months.

While there are signs for hope over the medium to long term, for the time being, the labor market remains under pressure, as evidenced by the 6.3 percent year-over-year decline in employment we saw in December. Given the continued stress on the labor market, we have left this signal as a red light. 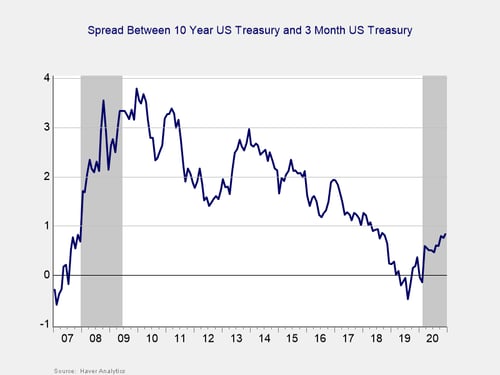 The yield curve started the year inverted, and it un-inverted in March, where it has remained throughout the pandemic. This un-inversion was driven by a sharp drop in short-term rates, caused by the Fed’s decision to cut the federal funds rate to effectively zero percent in March. The 3-month Treasury yield rose modestly in November, from 0.08 percent at the start of the month to 0.09 percent at month-end. The 10-year yield also rose during the month, from 0.84 percent in November up to 0.93 percent in December, driven in large part by rising expectations for additional federal stimulus spending during the month.

Although the rate differential remains in the recession zone, it is approaching the level that historically has signaled a recovery. While we are leaving this indicator at a red light, based on the current level, there are positive signs, too. 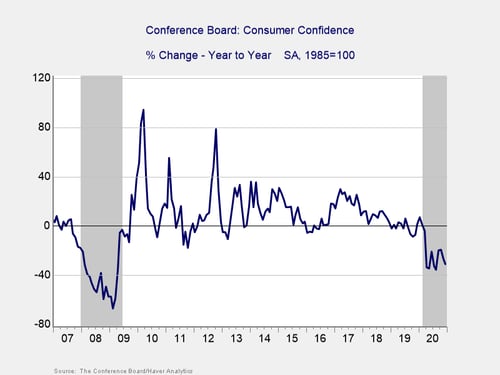 Consumer confidence fell by more than expected during the month, with the Conference Board Consumer Confidence Index falling from 92.9 in November to 88.6 in December, against forecasts for an increase to 97. Confidence declined by 30.9 percent year-over-year, down from November’s 26.7 percent decline. Confidence declines of 20 percent or more over the past year are typically signals of a recession, which is consistent with the NBER declaration.

Historically, improving consumer confidence has supported faster consumer spending growth, so this is a concerning sign for December’s consumer spending figures, although not a surprising development given the weakening labor market and worsening public health situation during the month. Looking forward, it is possible that the additional federal stimulus announced at year-end and continued progress in containing the spread of the pandemic may help bolster consumer confidence and spending. But for the time being, the declining confidence should be monitored.

Given the unexpected decline during the month and the continued weakness year-over-year, we have left this indicator as a red light for now.

December’s data releases largely pointed to a continued slowdown in economic growth driven by the worsening state of the pandemic. With that being said, slower growth is still growth, and there are signs the economy has adapted to better withstand waves of rising infections, as evidenced by the strong business confidence data. Although the headline loss of jobs during the month was disappointing, the underlying strength in professional and retail sales hiring is another sign that the economy continues to successfully adapt.

With the third wave worsening, and despite the continued growth and adaptation, there is a real risk to the economic recovery over the next few months. While the continued rollout of vaccines in 2021 should result in faster growth, the major question is: how much damage will be done until then? The additional stimulus announced at the end of the year should help bridge the gap until vaccines are widely deployed, and there are positive signs; however, given the continued health risks and the current data, caution is warranted for now. Therefore, we have left the risk level at a red light for the economy as a whole in January.