The economy continued to show signs of growth in November, but the data weakened as the third wave of the pandemic slowed economic activity. Job growth slowed substantially, and service sector and consumer confidence both declined. Despite the slowdown, however, growth has continued as the economy continues to adapt. While the pandemic is indeed acting as a growing headwind, the recovery continues to be surprisingly resilient. 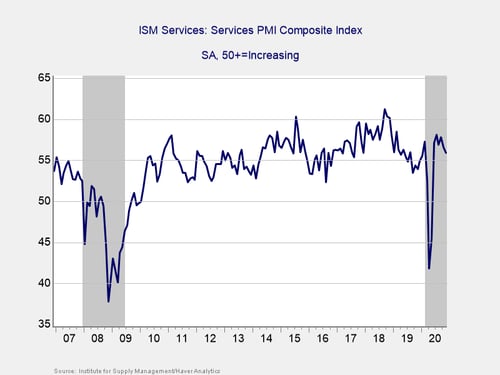 This measure of service sector confidence declined during the month, falling from 56.6 in October to 55.9 in November, against calls for a drop to 55.8. This is a diffusion index, where values above 50 indicate expansion, so this decline leaves the index in expansionary territory. In addition, service sector confidence sits near the pre-pandemic high of 57.3 that the index hit in February and higher than the levels seen throughout much of 2019. The decline in confidence is understandable, given the worsening public health picture during the month and the risks that rising case counts present for service sector businesses, but the results still suggest continued growth.

Given the fact that confidence remains in expansionary territory and near pre-pandemic highs, we have left this signal as a green light for now. 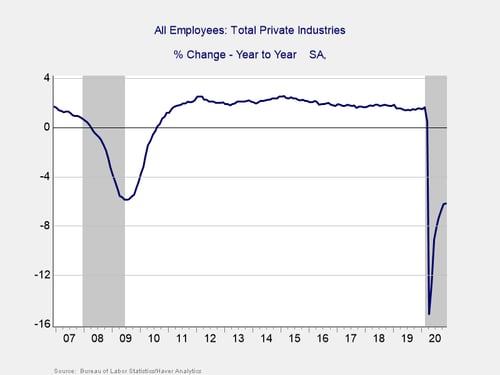 November’s employment report showed that 245,000 jobs were added during the month, which was down from the 610,000 jobs added in October and lower than expectations for 460,000 additional jobs. While some of the decline can be attributed to expiring temporary census jobs, the number of privately added jobs during the month fell by more than 60 percent, from 906,000 in October to 344,000 in November. On a year-over-year basis, total employment ended the month down 6.2 percent, which was in line with October’s result.

The good news here is that employment continues to increase—and at a rate faster than we saw before the pandemic. The bad news is that this is a significant slowdown in what had up until now been a resilient recovery for the labor market. Although this is just one weak month of data, it is the clearest sign yet that the third wave of the pandemic could derail the recovery. Given the negative effect a weakening employment picture can have on consumer confidence and spending, we have brought this signal back to red. 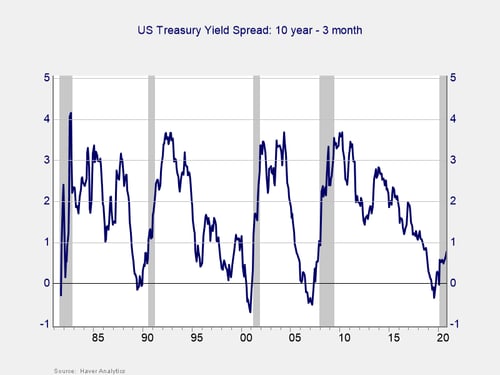 Although an inversion is a good signal of a pending recession, it is when the gap subsequently approaches 75 bps or more that a recession is likely. We finished November with a spread of 76 bps, and the National Bureau of Economic Research (NBER) declared a recession started in February. In light of that, and with the spread remaining at the critical level, we are leaving this indicator at a red light. 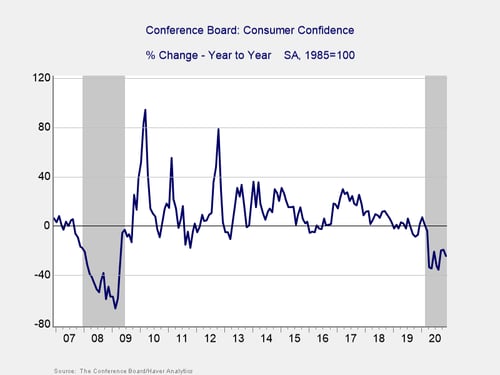 Consumer confidence fell by more than expected during the month, with the Conference Board Consumer Confidence Index falling from 101.4 in October to 96.1 in November, against forecasts for a more moderate decline to 98. Confidence declined by 24.2 percent year-over-year, down from October's 19.6 percent decline. Confidence declines of 20 percent or more over the past year are typically signals of a recession, which is consistent with the NBER declaration.

Given the decline during the month and the continued weakness year-over-year, we have left this indicator as a red light for now.

November’s data releases largely pointed to a continued slowdown in economic growth driven by the worsening state of the pandemic. With that being said, slower growth is still growth, and there are signs the economy has adapted in order to better withstand waves of rising infections. The continued relative strength we see in service sector and consumer confidence compared with earlier in the year is an example of this increased resilience. The disappointing job growth during the month, on the other hand, is concerning and will need to be watched.

With the third wave continuing to worsen, and despite the continued growth and adaptation, there is a real risk the recovery could end. While the expected rollout of vaccines in 2021 should result in much faster growth, for the time being, the major question is how much damage will be done until then. Given the rising medical risks and the slowdown in growth in November, that could be substantial. Therefore, we have left the risk level at a red light for the economy as a whole in December.