The economic data released in November came in mixed, with disappointing declines in business and consumer confidence offsetting better-than-expected employment and yield curve data. The November jobs report was especially strong, as more jobs were created than expected in November, while October’s results were revised upwards. Despite these positive results, the longer-term trends continue to suggest that there are still very real risks in the economy that should be monitored going forward. 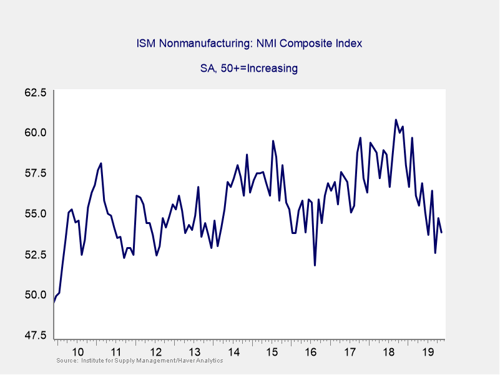 This measure of service sector confidence unexpectedly declined in November, falling from 54.7 to 53.9. This drop offset part of October’s recovery after hitting a three-year low in September. This is a diffusion index, where values above 50 indicate expansion. So, we can still expect slow growth from this portion of the economy. With that being said, the clear downward trend over the past year is concerning; therefore, we will be keeping this indicator at a yellow light, trending toward red. 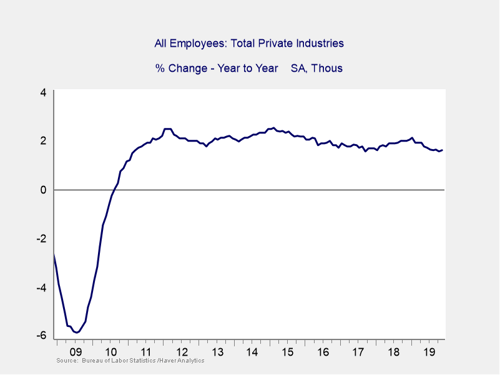 November’s employment report came in much better than expected. Overall, 266,000 new jobs were added during the month, against expectations for 180,000. October’s headline jobs figure was also revised upward. The pace of new job creation has been trending downward for much of the year, but the better-than-expected results over the past two months have helped slow this decline. We moved this indicator to yellow last month. But given the better-than-expected results since then, we’ll keep it at yellow for now. 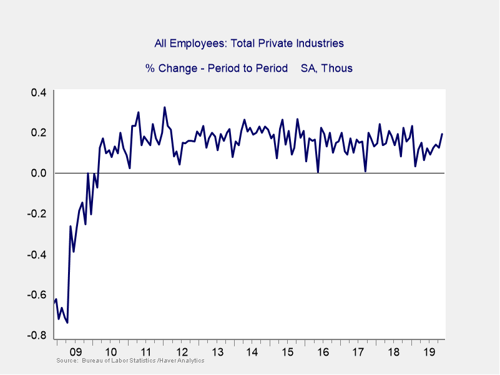 Month-over-month job growth was positive again in November, as the better-than-expected result helped bring the monthly growth rate in new jobs up to 2018 levels. The headline jobs figure was positive, and the underlying data was encouraging as well. Unemployment fell to 3.5 percent, while wage growth came in better than expected. It is still too early to say that the slowdown we saw in new job creation at the beginning of the year is behind us; however, given the improvements we’ve seen over the past few months, we will leave this indicator at yellow for now. 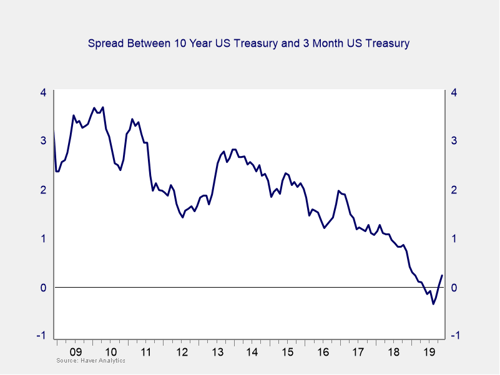 The yield curve widened further in November, as the yield on the 10-year Treasury note rose from 1.73 percent to 1.83 percent during the month. This marks the second straight month where the yield curve has remained un-inverted, which is a welcome return to normalcy. Despite this un-inversion, the risk of a recession in the future still remains, as historically we’ve seen recessions follow un-inversions of the yield curve within 12 months. There is also the chance that we will see another inversion in the short term, as a return to August’s recent low-water yields for the 10-year would leave us inverted. We are keeping this measure at a yellow light for this month.

Consumer confidence came in worse than expected in November. It fell from 126.1 in October to 125.5 in November, against expectations for an increase to 127. This marks the fourth straight month of year-over-year declines for confidence; however, at least this month’s reading of –8 percent is slightly better than last month’s –8.6 percent result. Although confidence sits at high levels on an absolute basis, the continued weakness on a year-over-year basis is a concern. We are not yet at the –20 percent year-over-year decline that has historically put pressure on consumer spending growth, but future weakening confidence could get us there quickly. We’ll continue to leave this indicator at a yellow light for now, but we’ll be watching it closely going forward.

All things considered, November largely saw risks moderating across a number of important areas of the economy. The stronger-than-expected jobs report was very encouraging given earlier weakness this year. Although the drops to service sector and consumer confidence were disappointing, spending remains solid, and there’s potential for a rebound in consumer confidence as long as the employment market remains strong.

Despite the improvement on a monthly basis, the year-on-year trends indicate that risks remain. Although a continued slowdown remains the most likely case based on the data, the chances of a recession within the next 12 months cannot be dismissed. Right now, however, a slowdown is not a recession, even as the bulk of the data indicates the risks of a worsening slowdown remain material. As such, we are leaving the overall risk level at a yellow light for the economy as a whole for December.