As I kind of expected, some news did hit yesterday while my son and I were fishing that is definitely worth a closer look. The Conference Board’s survey of consumer confidence—one of the most underappreciated economic stats there is—dropped from 131.3 in May to 121.5 for June. This result is the lowest level since September 2017.

Why does it matter?

Consumer spending drives more than two-thirds of the economy. No spending growth, no economic growth. For consumers to spend more, they must have jobs (which is why job growth is another key metric), but they must also feel good enough to spend that money. When confidence drops, the willingness to spend starts to evaporate. That scenario is just what we saw in this month’s report.

That said, the risk is not immediate. Confidence remains at quite a high level historically, one consistent with strong growth. What is concerning is the change in trend.

When you look at the absolute confidence number, it is kind of meaningless. What does confidence of 121 mean, anyway? I don’t know. What gives this number meaning is the historical data, which we just mentioned, or the trend. 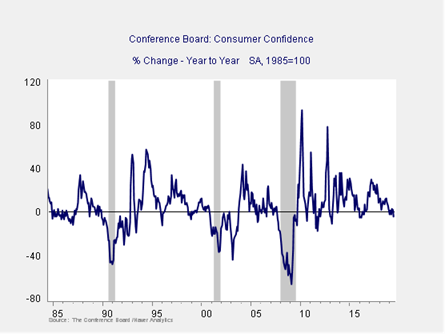 One of the best ways to analyze the trend in confidence is to look at the year-on-year changes. As you can see in the chart above, when confidence drops by 20 points or more, year-on-year, we usually get a recession shortly thereafter. We are not there yet. But we are now below zero again. And with one more drop like this month’s? We would be getting awfully close to that break point. That is why this month’s data matters.

Beyond the headline numbers

When you look beyond the headline numbers, the concerns get even worse. The current conditions index dropped, but the expectations index deteriorated even further. People feel less good now, and they expect to feel even worse shortly. More, given the recent drop in gas prices and bounce in stock prices, both indices should have risen and not fallen. It looks like worries about the trade war are overriding those effects, leaving these numbers even more vulnerable if gas prices were to rise or job growth were to slow.

There is no need to panic yet, as there is certainly time for this to reverse. We saw false alarms in the early 1990s and mid-2000s, and the last significant drop after the government shutdown reversed reasonably quickly. There is some cushion here. In the context of rising worries, though, this is another sign that we are getting closer to the end of the expansion than to the beginning.

From an economic perspective, therefore, this is something to keep an eye on but is not yet a major concern. The stock market, however, might be more vulnerable. What most people don’t realize—but what makes sense, when you think about it—is that stock market valuations are very highly correlated to consumer confidence. When people feel good and are spending, not only does the economy grow faster, but investors are more confident and more willing to pay up for investments. When the reverse happens, not only does growth slow (which applies to earnings growth, as well as economic growth), but valuations tend to drop. Consumer confidence gives both a double whammy up—and down.

For this recovery so far, we have seen the benefit of just that. Rising confidence has supported both growth and valuations for the past decade, albeit from very low levels. Now, with the economy and the market at record levels, if confidence reverses, we will likely see both backtrack. Confidence matters on multiple levels, both economic and investment.

We will, of course, be keeping an eye on this indicator going forward. There is a real chance of another bounce—as we have seen before—but each dip gets a bit more damaging. This is one more growing concern.