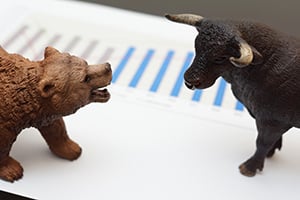 As we discussed yesterday, the bear is here. We talked about how interest rates, especially the yield on the 10-year U.S. Treasury note, will be determinative as to how long and deep the downturn will be, but noted that there was really no telling. Today, I want to take a look back at history and see if there are any clues we can look at.

I was up in Banff last week and was lucky enough to see several black bears (from a distance). The guides made sure to keep us well away, even as they noted, in general, you face little danger from a black bear if you don’t bother it. Grizzlies, they said, are a different story. They are significantly more dangerous, even if you are smart about how you interact with them. And we find ourselves in the same situation today. Do we have a black bear market, in which case we can carry on and assume it will eventually leave us alone? Or is this a grizzly bear market, which may affect us no matter how smart we try to be?

Bears Past and Present

One way to help determine that is to look at past bear markets and what was happening at the time. One analysis, from J. P. Morgan, lists 10 bear markets from 1929 through 2010 and notes whether there was a recession, a commodity price spike, or a Fed raising interest rates, as well as whether the market was at extreme valuations. All of them had at least one of these risk factors.

When you look at the effect of the risk factors, though, you can pull out some interesting data. In 1962 and 1987, the only risk factor was valuations—and both of those crashes were sharp but very short. Interestingly, those were also the only two bear markets that occurred in the absence of a recession. Bear markets that are based solely on valuations, and not economic factors, tend to be short.

Which does not give us much comfort today. Looking at those factors, we have a commodity price spike in energy. We have a Fed aggressively raising interest rates. And we had—and still to some extent have—very high valuations on a historical basis. Given those factors in conjunction, the current bear market is not much of a surprise. We are in it and could be for a while.

The remaining risk factor question is whether we get a recession as well. Here, the evidence is mixed. While sentiment is terrible and the risks are increasing, so far the data—job growth, confidence, and the yield curve—is still outside the risk zones. We still have some momentum going for us here, which should keep us growing through the rest of the year overall. That won’t pull us out of the bear market, of course, but it should help keep it less damaging and shorter than it might have been, in black bear rather than grizzly bear territory.

This is good news because when you look at the stats for past bear markets, they suggest we still have a ways to go before we exit this one. The average length of the 10 that J. P. Morgan reviewed was 25 months, with an average decline of 45 percent. But if you take out the worst of them, the real grizzly bears from the 1920s and 1930s, and go back “only” to 1962, you get a much shorter average length and decline. Given the decline we have already seen, that suggests future damage may well be limited. If we do not get a recession by the end of the year, our odds will improve even further.

How Long Will It Last?

When you put all of this together, we can reasonably conclude several things. First, this bear market will not reverse tomorrow. We will be dealing with this for some time. The risk factors are real and will not be going away any time soon. As investors, we need to be prepared for that.

Second, though, we have a time frame and things to watch for. Looking at the risk factors, oil prices will be key, as will the Fed’s interest rate policy. Those will likely roll over at about the same time, as energy is a major driver of inflation. Similarly, the recession risks will also roll over as energy prices and rates top out. Although there are real risks out there, we know what to watch for on the economic side—and there is reason to believe we are close to being through the worst of it.

On the market side, the good news is that valuations are already back to typical levels of the past 10 years and starting to approach those from before the financial crisis. That limits the likely future damage, as well as the likely duration.

Will This Bear Market Get Worse?

It could, certainly. But with the risk factors already in place, and largely accounted for, it doesn’t have to and may not. One major risk factor is approaching resolution, while we can see how the others will resolve as well. Will it end any time soon? Probably not. But the bulk of the damage has likely been done, and history shows we may see a market rebound sooner rather than later. Is this a grizzly or a black bear? So far, it looks more like a black bear market. Black bears do have teeth and claws, as we have seen, but they are also more likely to retreat than attack.

This Too Will Pass

The final point we can take from prior bear markets is simply this: they end. When the economy rebounds (which it does), when investors regain confidence (which they do), and when we move from fear to optimism (which we will), the market will recover and move higher. It has happened after every single bear market thus far, and it will happen after this one. As investors, in fact, this kind of volatility is what allows for substantial returns over time. On the one hand, it is a scary time. But on the other, it is both normal—and necessary.

This too will pass. Keep calm and carry on.