A Broader and Deeper Look at Interest Rates

One of the major current risks to the market is the Fed’s tightening of policy. Much has been written about the Fed’s plans to raise rates, to start downsizing its balance sheet, and so forth. But what has been missing so far is the fact that many of the changes have already been factored in by the market—and what the market seems to be expecting is not really in line with the headlines.

Let’s start with the expected May rate hike and the four (or five, or six, or seven, or eight) rate hikes expected to follow. If everything goes as planned, short-term rates should increase by more than 1 percent within the next year. Given those expectations, you might reasonably look to have rates for longer-term Treasury notes rise as well.

Yet, as the chart below shows, this isn’t happening. The three-month note has risen to just over 0.4 percent, which makes sense given expectations over that time frame. But the yield on the two-year note is up by only about 0.8 percent since the start of the year, which seems a bit low given the expected increases over that time frame. And the 10-year bond has only risen by less than 0.4 percent over the same time frame. What is going on here? 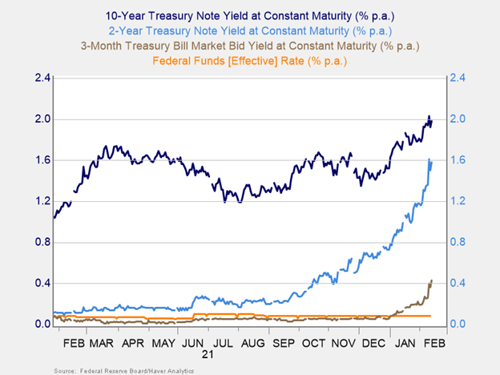 The answer is that the market is looking through the immediate rate increases. Higher rates will likely slow both inflation and growth. If growth is slowed enough, then the Fed will be forced to cut rates again. And the longer the time frame, the more likely that is. The 2- and 10-year yields, then, reflect not only short-term rate increases but also later expected policy changes that are not yet in the headlines. That lets us draw some conclusions about the path of the economy as markets now see it.

One of the easiest ways to do this, visually, is to look at the spreads between shorter-term yields and longer-term yields. The smaller the spread, the greater the risk of a recession. When short-term rates are above long-term rates, the yield curve is said to be inverted—and, as you can see in the chart below, a recession tends to follow in the next year or two.

We can combine these two analyses as well. If the Fed does hike rates by the expected amounts, both spreads should be close to negative by the middle of next year. Given that, we can expect a recession some time in 2024. And the Fed will then have to cut rates again. This is why the 10-year bond does not reflect the increases the headlines are talking about because, over that time frame, they will be at least partially offset by cuts at some point.

From my perspective, this is the most useful takeaway from the current speculation about what the Fed will do. How quickly it raises rates matters, although not as much as people think (see the taper tantrum post). What matters most is when Fed policy turns from expansionary to contractionary, and that looks to be likely in the next year or so.

That shift, unfortunately, is necessary and by design. Higher rates are designed to slow growth and are a blunt instrument that usually slows growth more than expected or desired. The consequence of the Fed hiking rates will very likely be a recession—and that will have a much bigger effect on markets than how quickly the Fed gets started. As always, the headlines are focused on the immediate rather than the important. Fortunately, we can keep an eye on both.