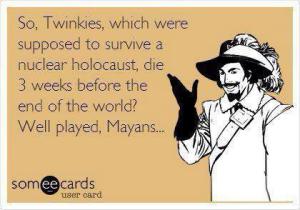 One of the leading stories over the weekend and this morning is the bankruptcy of Hostess, maker of Twinkies among other things. It made the front page of the Wall Street Journal (WSJ), New York Times (NYT), and Financial Times (FT) this weekend. Good to know they are keeping us informed about the important things.

One of the most interesting articles was on the precipitating event, which was a strike by the Bakers’ union. The head of the union is quoted as saying that he expects someone will buy the company and rehire his members at a better rate than Hostess offered. Others in the article, including the Teamsters’ union, consider that delusional.

Not to make too much of this, as it is a sad story all around, but the fact of the matter is that once the money runs out, no one is going to keep supporting you as if the money were still there. Europe is finding this out even as we speak, and the U.S. is on the same track.

Which brings us, of course, to the fiscal cliff negotiations, which started on Friday. Headlines over the weekend were encouraging, with “At Bipartisan Budget Meeting, Familiar Hurdles but a New Attitude” (NYT, p. A14), “First Talks Bring Hope of Broad Budget Deal” (WSJ, p. A8), and “Optimism breaks out as White House fiscal cliff talks begin” (FT, p. 3). Stocks did well on Friday and were doing well Monday morning, too.

Monday’s papers are less cheerful. The sense is that taxes will be going up—and everyone is starting to plan. The NYT has “Investors Rush to Beat Threat of Higher Taxes” on the front page, which talks about the mass movement to realize gains and income ahead of the end of the year. The FT has a box titled “Tax threat” on the front page, which also talks about elimination of tax breaks for businesses, with a follow-up on page 4. Finally, the WSJ has “Investment Falls Off a Cliff” on the front page, about how business investment has tanked in the face of the uncertainty created by the fiscal cliff. The WSJ also follows up with a special section, headlined “CEOs to Washington: Strike a Deal—and Do It Now.”

The pressure is clearly building to do something, but, unfortunately, what is now being floated is a two-part process. First, a down payment this year, then substantial reform next year. Sounds like kicking the can to me.

Even worse, the articles continue to emphasize the lack of agreement on extending the Bush-era tax cuts for the “wealthy.” The new attitude so far does not extend to any actual agreements or compromises, it seems.

A better attitude and an expressed willingness to compromise are great things—and indeed necessary. They are not actual deals, though. This is not even close to over. Expect more turbulence and volatility, as negotiations could well run to the end of the year.