The big news this weekend was the dog that did not bark: Larry Summers withdrew his name from consideration for chairman of the Federal Reserve. There are headlines on this in both the New York Times and the Wall Street Journal, among others, and it was a lead question I discussed on CNBC this morning.

Which, of course, makes the average person ask, “So what?” Why do I care that an economics professor and former government official isn’t going to apply for a job? How does this affect my life?

A good question, and the short answer is interest rates. The longer answer is that it affects how much you pay to buy a house or a car, and how many jobs are created, as well as many other aspects of your daily economic life.

Of the candidates for the chairmanship of the Fed, Larry Summers would have injected the most uncertainty into the system. As a former Treasury Secretary and academic superstar, he unquestionably has the firepower to do the job, but there were questions about his ability to work well within the system. As a Federal Reserve outsider, he lacked the connections a long-term internal candidate would have, and it wasn’t clear that he could work effectively with people who disagreed with him.

His policy positions were also a key issue, with his work on Wall Street and positions on deregulation when he was Treasury Secretary prompting key Senate Democrats to announce they wouldn’t vote for him. Ultimately, it seems that opposition by the Democrats was what caused him to withdraw.

As I write this, stock futures are up and interest rates are down. On the surface, the market seems to be saying it’s glad Summers withdrew, but I don’t think it’s as simple as that. What the market is really saying is that it’s glad uncertainty has been reduced. As an outsider, Summers would have introduced an element of policy uncertainty about raising rates and reducing stimulus that an internal candidate wouldn’t have.

With Summers out, the most probable contender is internal. Janet Yellen, currently vice chairwoman of the Fed and previously the president of the Federal Reserve Bank of San Francisco, is a long-term Fed insider. As one of the Fed members perceived as most “dovish” on inflation—that is, one of the most tolerant of allowing inflation to increase—she’s thought to be most likely to continue the current policies and to leave stimulus measures in place for the longest. With its reaction, the market is saying that Yellen is a safe choice who’s unlikely to rock the boat, and who will continue the current policies, which the market is used to.

I’m not sure that’s the case, longer term, although I think the perception is probably correct in the short run. Yellen is perceived as dovish, and that has been true, but her policy preferences have been based on her prescient views on the weakness of the economy. She was one of the first senior Fed officials to recognize the pending housing crisis and was also way ahead of the curve on the slowness of the current recovery. I think it’s fair to say that her policy prescriptions, thought dovish at the time, have in fact been right on. When the recovery starts to gear up, I suspect she might be equally prescient in recognizing, and responding, to that.

She is not, however, the only candidate. Two other names have been floated: Donald Kohn, a former Federal Reserve vice chairman, and Timothy Geithner. Both have extensive central bank experience and excellent credentials, and both would be good candidates. As with Summers, however, they would introduce more uncertainty into the system merely by virtue of not being there right now, possibly driving rates up again as the market tries to assess what their candidacy would bring.

The interest rate and stock price reaction may be short lived, as other factors are certainly in play, with Syria being a key one. I also believe that the decline in rates is due, at least in part, to the market getting better at price discovery in the face of the impending taper in Federal Reserve stimulus to the bond market. Nonetheless, the fact that something like this can move rates and markets highlights the continuing importance of government actions to the economy.

One of the more, shall we say, interesting magazine covers showed up on my desk yesterday. Not, as you might expect, the Rolling Stone cover, which is simply a contemptible bid for publicity. No, I’m referring to the Bloomberg BusinessWeek cover, which displayed a somewhat graphic, at least on an implied basis, picture and graph.

The headline on the cover is “The Hedge Fund Myth,” and the cover story spends quite a bit of time excoriating hedge fund managers for making lots of money and not deserving it.

I wrote on July 3 that the U.S. is the only continental power with voluntary economic integration. By that, I meant that the fiscal transfer mechanisms have been in place for a long time and are generally accepted. Few people know, for example, how much their state pays to the federal government versus how much it receives. It has come up in the past, of course, usually in stressed economic times, but it has never become a long-term political issue.

Seems like the central banks’ soothing is working. U.S. markets were up yesterday, and international markets are up broadly today. Even the narrative has changed, with neither of the major papers dealing with the central banks or the markets on the front pages, and the only real discussion in the Wall Street Journal being “A Hawkish Signal Bernanke Didn’t Send.” Got that? Nothing to see here. Move along.

I don’t usually focus on short-term market movements, but one of the things I found interesting yesterday was that, even as rates ratcheted up through most of the day, U.S. stock markets rallied. Although one day is far too short a time to draw conclusions, at least at that scale we have demonstrated that equity markets can do well while rates increase. We also have historical evidence that this is the case, over much longer time periods. 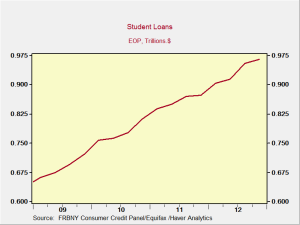 Like everyone else, I have been affected by the terror attacks of the past couple of decades. I mourned those killed in 9/11, cried for the Sandy Hook children, and sat appalled at Oklahoma City, but the Boston attacks have hit home the hardest, literally. I have never been to Oklahoma City, never lived in New York, so as much as it hurt, it was abstract—removed.

Not this time. My wife and son easily could have been at the finish line for the Boston Marathon. They were at home, working in the back yard, but they could have been there. I have friends who work in that area and had gone down to see the race. I haven’t heard that any of them were injured, but it could have happened.

“Margaret Thatcher RIP,” I tweeted yesterday, but in retrospect, that’s probably the least likely outcome. Wherever she ends up, peace is the last thing I would expect. If heaven, she’ll be offering God suggestions for how to run the world better; if hell, she’ll be planning a revolt. Love her or hate her, there’s no doubt that Margaret Thatcher changed Britain and, to a much lesser extent, the world.

I say “to a much lesser extent” because, as the current European situation plays out, it is becoming increasingly apparent that we’re reaching a Thatcherite breakpoint. To paraphrase one of my favorite quotes of hers, the problem with socialism is that eventually you run out of other people’s money. Europe, especially the periphery, is now at that point.

In my response to David Stockman’s op-ed piece in the New York Times, I stated that our problems are, in fact, solvable, and that we are—however slowly and painfully—in the process of solving them.

Not everyone is convinced, to put it mildly, and to state it is not to demonstrate it. Looking through today’s papers, though, I found a couple examples of exactly what I was talking about.

Several people have forwarded me “State-Wrecked: The Corruption of Capitalism in America”—a recent New York Times op-ed by David Stockman, former budget director for President Reagan—and asked for my thoughts. Having read through the piece, it’s actually not that easy to respond, as Mr. Stockman seems to be all over the place. In fact, I’m not sure exactly what he’s saying other than that we’re all doomed.

Trying to pick out the different parts of his argument, I come up with following. First, abandoning the gold standard was a huge mistake and has led to fiscal and moral debasement. Second, the Fed has been the agent of said debasement, printing money to enable the federal government’s wanton spending. Third, Wall Street has captured both the Fed and Washington, D.C., and is using them to enrich itself. Fourth, the 2008 financial crisis would have burned itself out and we would have been fine had the government not intervened. Fifth, our fiscal situation is not only worse than admitted but beyond hope. We cannot solve our present problems and face a future of poverty. In short, under the present system, we’re doomed, and we largely deserve it for past sins. Thus endeth the lesson.